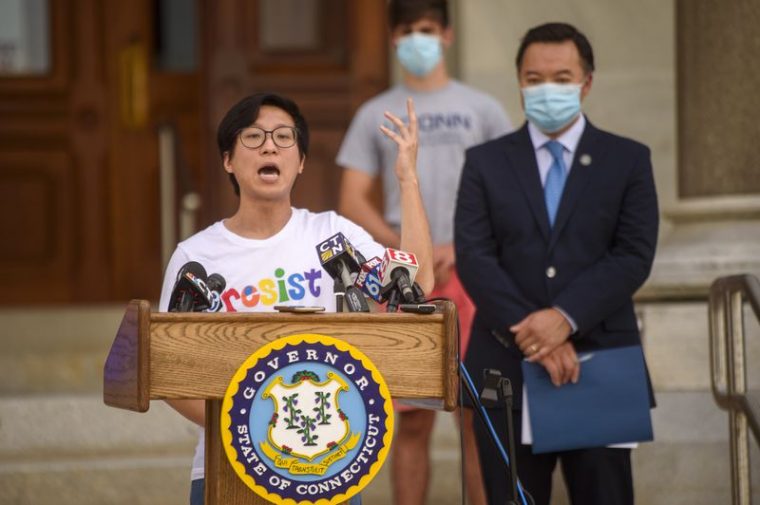 On July 6, when the U.S. government made a federal ruling that international students would be deported should their studies be held exclusively online, Bryan Chong ’21 took immediate action to fight back.

The Hong Kong native and visa holder had already spent six years in Connecticut, attending high school in Kent before enrolling at Wesleyan. If the COVID-19 pandemic moved Wesleyan to return to an all-online format again, the policy would have forced Chong to return to China for his senior year of college. But he wasn’t worried about himself as much as his international peers.

After receiving blowback from universities and colleges across the country, on July 14 the government abruptly rescinded the proposal, easing the minds of the more than 400 international students at Wesleyan.

On the night of the new policy announcement, Chong connected with several international students nationwide through social media and the Zoom platform to exchange ideas. Based on feedback from this discussion, and another with the Wesleyan Democrats student group, Chong, a government and psychology double major, determined that contacting Congress would be more effective than petitioning. He swiftly created a call and email script template and circulated it through personal networks. In one week, the template received more than 1,600 unique visitors.

Compared to other international students, Chong is deeply embedded in American politics, not just from academic study but from the actual practice and organizing. At Wesleyan, he’s a member of the Wesleyan Student Assembly, the co-chair of Wesleyan Democrats, and the co-founder of Wesleyan for Bernie. In addition, Chong is currently fundraising for the Direct Cash Assistance Program by Middletown Mutual Aid Collective, aiming to put $30,000 directly into the pockets of struggling Middletown families during the COVID-19 pandemic.

“Organizing to fight problems is a coping mechanism of mine, which naturally leads to me being a very action-oriented person,” Chong said. “As I continue serving the Wesleyan and Middletown community, I strive to reflect on my beliefs and methodology to the end of better uplifting the voices of the most marginalized and vulnerable in our communities.”

On July 13, a full week after the implementation of the July 6 directive, Chong was invited to the State Capitol in Hartford, Conn., to speak at a press conference with Connecticut Attorney General William Tong and Governor Ned Lamont to announce a lawsuit against Immigration and Customs Enforcement (ICE) regarding the ban on international students.

“I urge Americans across the country to support and stand in solidarity with international students whose very real livelihoods are being impacted by this policy,” Chong said during the conference. (Listen to Chong speak, at 18:30, in this Connecticut Network video stream.)

In addition to Chong’s efforts, Wesleyan joined 58 peer colleges and universities in filing an amicus brief to halt the implementation of the policy.

The brief was signed in support of a petition filed by Harvard University and the Massachusetts Institute of Technology that sought to enjoin the United States Department of Homeland Security (DHS) and the Immigration and Customs Enforcement (ICE) from implementing the policy that would deny visas and deport international students whose campuses are unable to resume in-person courses in the fall due to the worsening COVID-19 pandemic.

“At Wesleyan, we have been fortunate to have about 15% of our students coming from abroad, and they have contributed so much to the educational and cultural life of our community,” he wrote. “We will take advantage of all appropriate ways to assist our international students during this pandemic. We will support their efforts to continue their education. I hope you will join me in urging our elected officials to stand up for international students and education.”

Said Chong, “In my time here, I have met so many wonderful people and have experienced a lot of ‘mundane firsts’ that have been very impactful on my appreciation of the beauty inherent in the particular and the mosaic of ‘average American life’—from having breakfast food at dinner time in a diner, to heartwarming campfires in nicely mowed backyard lawns, to picking apples in New England orchards during the fall. It was scary and sad to imagine that this policy is how all of that could end.”

nextFlowers from Foss, Wildlife from WestCo