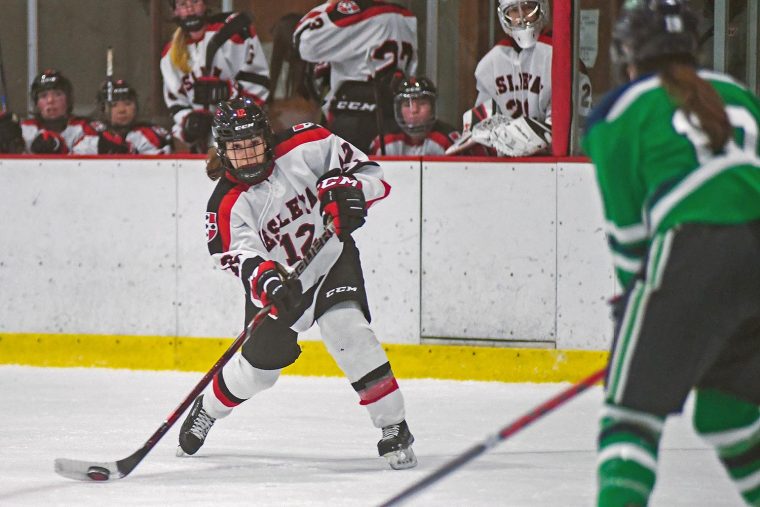 Although many amendments have been ratified since the first election in this country more than 230 years ago, the simple fact remains: Voting is a right and a privilege.

With just 46 days (upon the publishing of this article on Sept. 18), remaining until Election Day 2020, Audrey McMahon ’22 of the Wesleyan women’s ice hockey team has set an ambitious goal: to get 100% of eligible student-athletes registered and pledged to vote.

McMahon has taken on the role of Wesleyan’s resident ambassador for Voice in Sport (VIS), a nonprofit advocacy group dedicated to supporting women student-athletes. In an initiative that has gathered steam over recent months, McMahon has joined a campaign initiated by VIS called #MoreVoicesMoreVotes.

Wesleyan as a whole has taken drastic action in 2020, making Tuesday, Nov. 3 a University holiday with all classes canceled for the entire day. In addition, the athletic department has mandated no sport practices on Election Day, giving student-athletes the opportunity to vote at their own leisure. Building off the University’s support, Wesleyan students can register to vote in Middletown, making the process easier for those who haven’t registered elsewhere or who want to switch. McMahon is tripling down on the campus-wide initiative to create a groundswell that’ll make the voices of student-athletes heard.

McMahon is already encouraged by the initial support she has received amongst the athletic programs at Wesleyan. She started the campaign by contacting Wesleyan’s Student-Athlete Advisory Committee (SAAC), who passed the message along to other members to distribute to their respective teams. From there, teams showing interest will designate a team leader tasked with ensuring each eligible teammate is registered and pledged to vote. Thus far, 17 teams have designated team leaders and committed themselves to the campaign with others expected to join in the weeks to come.

“Most of the athletes who have signed up as leaders, as well as the coaches who have reached out, are really supportive of the campaign itself,” McMahon said. “Since many students may already be registered, the pledging aspect of the process is key, which is simply making a plan for how you will vote. This is done by either determining the location of your in-person polling place or requesting an absentee ballot.”

McMahon’s involvement with this campaign has everything to do with her connection to VIS, a relationship fostered from former teammate Sydney Sorkin. Both played at Jones College Prep prior to collegiate hockey, as Sorkin is a rising senior on the Harvard women’s hockey program. Sorkin, who works at VIS, nominated McMahon to join and the interest was mutual and immediate.

“I decided to join because I really like the organization,” McMahon said. “As a female athlete, I admired the leadership and dedication to creating space for women’s sports. VIS is unique in that it’s a women’s sports company that provides a community for female athletes to be celebrated and take part in advocacy efforts like the #MoreVoicesMoreVotes initiative. More importantly, I was thrilled to be part of a campaign that is pushing for something much bigger than sports.”

McMahon says she’s motivated by the “incredible women of the WNBA and NWSL, who are setting the standard for what it means for athletes to use their voices to create and inspire change. The #MoreVoicesMoreVotes campaign seemed like a great opportunity to emulate their leadership in my own life.”

These efforts to spearhead a movement amongst the student-athlete population at Wesleyan translates seamlessly into the ways in which McMahon carries herself back home in Chicago as well. On the Fourth of July this summer, McMahon participated in a peaceful protest in Chicago organized by FroSkate, a local skateboarding crew centered around women and bringing people of color into a world traditionally dominated by white males.

“When everything really started to happen this summer, in terms of social justice reforms this past year, she was involved right away,” said Wesleyan women’s ice hockey head coach Jodi McKenna. “She talked openly about it with our team, she participated in the peaceful protests, and she showed she wants to be part of the solution right away.”

“I think it’s been pretty amazing in the given context that this is all happening in the midst of a pandemic,” said Coach McKenna. “It’s really easy to stay in your own silo and just try to get by day-by-day with your own issues and problems. So the ability of Audrey and so many people on campus in the younger generation to step out of that and deal with it, while at the same time putting their foot down and saying ‘no more’ is really impressive. I think the older generations can learn a lot from what they’re doing. Change has been needed for so long and that’s why it’s so important to get this generation to vote, to get their voices heard, and to think if that happens, it can drive positive change.”