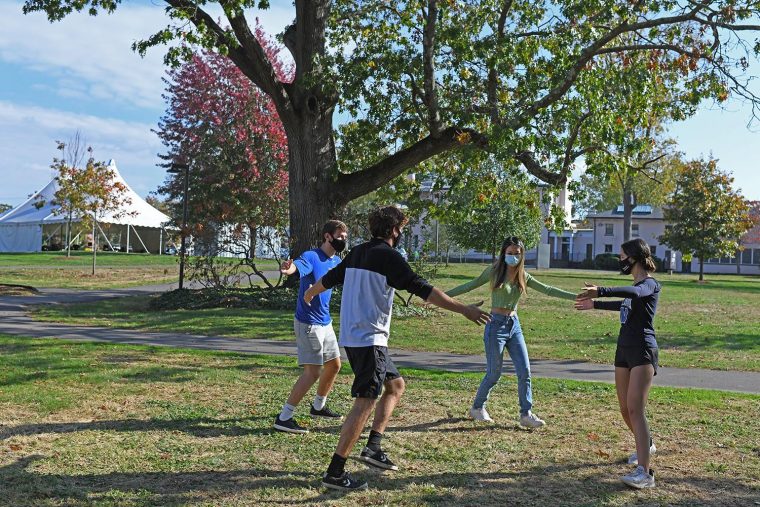 When the GOVT: 296 Japanese Politics class was learning about environmental policy, course instructor Professor Mary Alice Haddad brought her students out of the Hogwarts Classroom and to the Center for the Arts Green for their Oct. 22 class.

With social distancing in mind, Haddad taught the lesson through kinesthetic learning—learning with your body. She learned about this technique from her experience with Wesleyan’s Creative Campus Initiative, which pairs performance artists with non-performance faculty for teaching collaborations.

“Kinesthetics is one of the most effective ways to learn, but it is often undervalued as a mode of instruction outside of the arts,” Haddad said. “Through collaborations with numerous dancers over the years is where I learned about how valuable these kinds of exercises can be to enhance the class dynamic and in facilitating student learning. They are also fun!”

In the first exercise, Haddad taught her students how to bow—a vital skill and an important aspect of cultural competency when living in, working in, or visiting Japan.

In the second exercise, Haddad asked the students to observe their environment, first with eyes open, and then closed. During reflection, the class remarked how they were much more aware of the sounds of the birds and the feel of the sun and breeze on their skin when observing with their eyes closed.

“While their eyes were open, they paid more attention to man-made things like buildings and cars and when they weren’t using their eyes, they were much more aware of their natural environment,” Haddad said. “I highlighted that one of the main reasons they take a class on Japanese politics, or any class about a different culture, is that it opens up a new perspective. Much like noticing the birds that were there all along when you close your eyes, studying Japanese politics makes you pay attention to different aspects of American politics—or the politics of wherever they come from—that were there all along but which you might not have been paying attention to before.”

During a “stop-drop-go” exercise, the students learned how amazingly perceptive people are by how quickly and accurately they can pick up on nonverbal subtle cues from one another and move together as a group. Through this process, the students feel in their body the psychological effects of the risks inherent in leadership; when they initiate a new movement, such as clapping, laying down, standing on one leg, or waving, they don’t know if anyone will follow.

“They quickly realize that in group settings it is frequently impossible to identify the leader, and it is often not the first mover who actually has the most power but rather the second and third mover who are the ones who turn a single person’s actions into the actions of the group,” Haddad said. “Although our exercise is quite innocuous, you quickly understand both how easy it is in group settings to be sucked into doing things you don’t really want to do as well as the subtle ways people can resist doing what everyone else is doing by modifying it or doing it in a slower or incomplete way.”

Haddad then broke the class into four groups and asked them to construct “movement phrases” based on their recent readings. Through this exercise, the students engaged with the topics emotionally rather than just intellectually and expressed all of that with their bodies. After performing their movement phrase, fellow classmates reflected on how they interpreted the movements.

For the final exercise, the class created their own version of a Shinto ritual in which individuals wrote prayers and tied them to a large oak tree, recognizing that the spirit of the tree is sacred. “Thus, for Japanese, and perhaps for us as well, our hopes and dreams are quite literally tied to the natural world. Our trees and plants should be revered,” Haddad said. “It would be good for all of us to take a moment, stand in awe, and bow in appreciation of what they do for us and how much our lives are connected to theirs.”

Photos of the Oct. 22 class are below: (Photos by Olivia Drake) next9 Postdoctoral Fellows Join Wesleyan in 2020-21