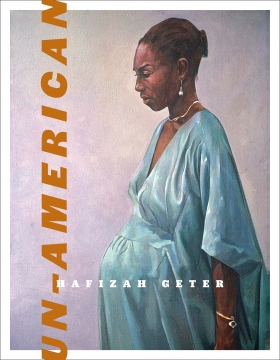 Hafizah Geter’s debut poetry collection, Un-American, is longlisted for the PEN Open Book Award. The PEN Open Book Award honors a work of fiction, literary nonfiction, biography/memoir, or poetry written by an author of color. The award was created by PEN America’s Open Book Committee, a group committed to racial and ethnic diversity within the literary and publishing communities.

Geter’s collection moves readers through the fraught internal and external landscapes—linguistic, cultural, racial, familial—of those whose lives are shaped and transformed by immigration. The daughter of a Nigerian Muslim woman and a former Southern Baptist Black man, Geter charts the history of a Black family of mixed citizenships through poems imbued by migration, racism, queerness, loss, and the heartbreak of trying to feel at home in a country that does not recognize you.

Armantrout takes pleasure in uncertainties and conundrums, the tricky nuances of language and feeling. In Conjure that pleasure is matched by dread; fascination meets fear as the poet considers an increasingly toxic world.

The Age of Phillis, by award-winning writer Honorée Fanonne Jeffers, imagines the life and times of Phillis Wheatley: her childhood in the Gambia, West Africa, her life with her white American owners, her friendship with Obour Tanner, and her marriage to the enigmatic John Peters. Woven throughout are poems about Wheatley’s “age”—the era that encompassed political, philosophical, and religious upheaval, as well as the transatlantic slave trade.

According to PEN America’s press release, the 2021 Literary Awards Longlists span 11 book awards and encompass more than 125 writers and translators, representing the year’s most extraordinary literary talents. Over 80 judges have selected the longlists, which are made up of categories including the novel, short story collection, translation, poetry, science writing, essay, biography, and more. (Read the full release here.)

Finalists for PEN America Literary Awards will be announced in February 2021.

Wesleyan University Press publishes books of poetry, and scholarly books in dance, music, and literary studies. The Press has garnered national and international accolades for its work, including six Pulitzer Prizes, three National Book Awards, three Griffin Poetry Prizes, and an Anisfield-Wolf Award, among many others.