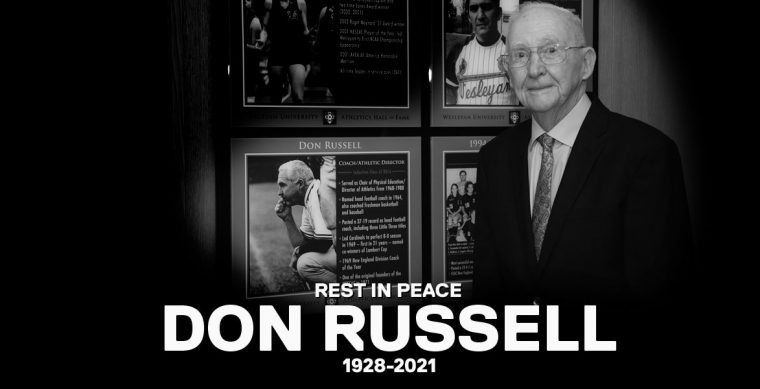 Donald Russell, professor of physical education, emeritus, and former director of athletics and head football coach, passed away on Feb. 2 at the age of 93.

Russell earned his BA from Bates College, where he played offensive and defensive tackle for the football team. Arriving at Wesleyan in 1960, he served as an assistant football coach under Norm Daniels, then became head football coach from 1964 through 1970, after which point he stepped down from that position, though he remained as the head of athletics until his retirement in 1991.

Russell led the Cardinals to three Little Three championships (’66, ’69, ’70) and to a stunning undefeated 8-0 record in 1969. All of this took place during tumultuous years on campus with demonstrations, bomb threats, and sit-ins. In fact, the year the football team was undefeated, Wesleyan had to get a restraining order to prevent a demonstration from interfering with the homecoming game with Williams.

“Throughout this difficult time, Don’s steadfast leadership and strong relationship with the players was instrumental in the team’s focus on football and accomplishing what no Wesleyan football team has done since,” said John Biddiscombe, adjunct professor of physical education, emeritus.

Throughout his career, Russell was also a leader at the national level, serving in many prestigious positions with the NCAA, as the chair of the Division III Advisory Council, and as President of the Eastern Collegiate Athletic Conference.

“Don was a founding administrator of the NESCAC and a strong advocate of the scholar-athlete model,” recalled Gale Lackey, adjunct professor of physical education, emerita. “His leadership was instrumental in shepherding the advancement of Title IX as it pertained to women’s athletics at Wesleyan. Under his directorship, 14 of the existing 15 women’s varsity sports were initiated. He was a well-loved coach and a highly respected administrator.”

nextStudents Return to Campus for Spring Semester (with Photo Gallery)