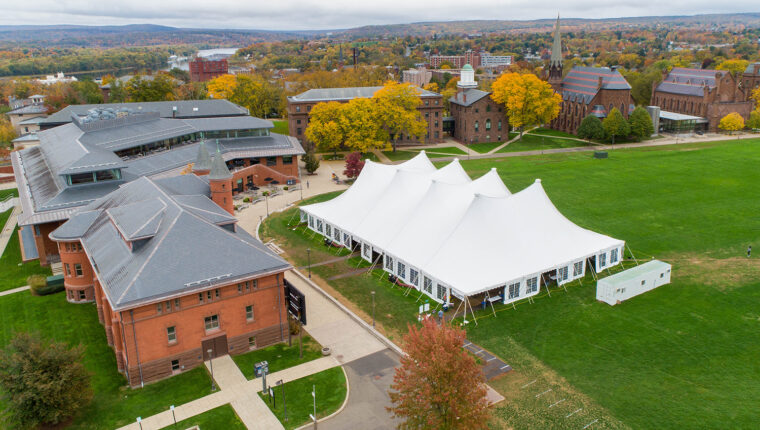 That’s how many times Wesleyan students, faculty, and staff have stuck, swiped, and swirled cotton swabs in their nasal cavities over the past seven months at the Wesleyan COVID-19 testing facility, with hopes for that negative result indicating no presence of SARS-CoV-2 RNA.

“Implementing an effective testing program was essential to returning for in-person learning,” said Associate Vice President/Dean of Students Rick Culliton, who spearheads Wesleyan’s Curricular Contingency Planning Task Force (CCPTF). “Our number one priority is keeping the campus community safe. Having accurate, timely test results has been critical to identifying and containing any cases of COVID-19 on campus.”

And this is why Wesleyan’s ad hoc testing site, currently set up in Beckham Hall, is so crucial for the University during the pandemic. Students are still required to test twice per week, and employees once per week.

But establishing such a facility wasn’t in anyone’s job description or workplace experience. It required a dedicated team of Wesleyan staff to step outside their traditional roles and develop what is now among the most important operations on campus.

On July 14, 2020, members of the newly-formed CCPTF began murmuring about the need for mass testing on campus if Wesleyan was to open with in-person learning in the fall. Andy Tanaka, senior vice president, chief administrative officer and treasurer, appointed three staff members to plan the operations and assist with staffing: Joyce Walter, director of the University Health Center; Lisa Brommer, associate vice president for Human Resources; and Joyce Topshe, associate vice president for Facilities.

Roseann Sillasen, project manager and associate director of Facilities, and Bill Nelligan, director of Environmental Services, were tasked with researching the Connecticut Department of Health requirements for the operation. They worked with Wesleyan’s Medical Director Dr. Tom McLarney, who provided guidance throughout the entire process.

“As the operations group started gaining intel on how the testing should work, I started drawing testing layout scenarios,” Hood recalled. “We started with the 100-by-300-foot Commencement-size tent, and through a few iterations and math problems, we figured we needed about half that size, 100-by-150-foot. I started to design the furniture, and by July 30, we had a layout. And then we talked through signage: where it would go, what it needed to say, and I proceeded to design and order the signs for the tent.”

“The testing tent became a remote office for some of us,” Topshe said.

“Our Facilities team is awesome,” Hood said. “I think the most important thing about how we changed gears is that as a planner, designer, and project manager, you just make it into another project in your mind’s eye. You build your team, figure out the steps, and make it happen. It’s been a whirlwind, but happily successful!”

After several months of testing, the Wesleyan community has become accustomed to the testing process, which involves registering, keeping six to 12 feet apart, nose-blowing, hand-sanitizing, having your temperature taken, signing in, hand-sanitizing again, collecting mucus through a nasal swab, and awaiting the test results. With the need for less instruction, fewer volunteers and nurses are necessary to staff the site. Nevertheless, Nelligan continues to open the site on a daily basis. Christine Daniels, Tanaka’s executive assistant, closes the operation every day and ships the tests off to the Broad Institute in Massachusetts.

Shifting Gears with the Seasons

No one imagined that the need for testing would extend beyond the warmer-weather months, but it did. Crews first brought heating units into the tent, but that wasn’t an optimal solution. As early as mid-September, staff began discussing the possibilities of outdoor drive-up testing sites and using the Freeman Athletic Center’s Bacon Field House for indoor testing.

But Beckham Hall, a more central location, became the top choice because it met the Department of Health requirements.

Hood developed six layout options in Beckham, due to changing regulations and distancing requirements from the State of Connecticut. “Sometimes it seemed like it changed daily,” she recalled. “And we had to stay outside until after Election Day due to our commitment to the City of Middletown to have voting in Beckham.”

The layout was completed Oct. 27, with a final tweak the morning of Nov. 9. The Beckham Hall site opened at 10 a.m.

During the winter recess, when most students, faculty, and staff were off-campus, testing slowed to only one day per week. Full operations resumed Feb. 5, when students began returning to campus for the 2021 spring semester. Wesleyan not only required students to be immediately tested upon arrival, but also to bring proof of having received a negative COVID-19 test within the past week in their hometown. Those who didn’t comply were sent to a new rapid testing site set up in the west wing of Usdan’s dining hall (which was created in less than five days by Topshe; Sillasen; Michelle Myers-Brown, director of Usdan University Center; Tom Policki, assistant director of building trades; and journeymen carpenters John D’Orio and Jim Kolasinski).

Although the process may seem seamless to the average test-taker, behind the scenes the Facilities crew has dealt with an onslaught of challenges.

“There were days when the big tent was feeling like it would blow over, or it rained and we had to haul in mulch to fill muddy patches,” Topshe said. “When it got cold, we were trying to heat the outdoor tent so the nursing staff wouldn’t freeze. We made signs, hung signs, and made more signs. There was PPE and more PPE. We were cleaning everything hourly, then overnight; building Plexiglas stations, fixing Plexiglas stations. Sometimes our computers and radios wouldn’t work, and once we reprinted 1,200 tube labels at the end of the day because of a software error. The biggest challenge has been to convince students to register for a time slot online to avoid overcrowding indoors. The COVID testing was like another full-time job for me during the second half of 2020!”

“It’s a remarkable accomplishment, thanks to the dozens of staff who have helped along the way,” Topshe said.

Additional photos of the COVID-19 testing site installations are below: