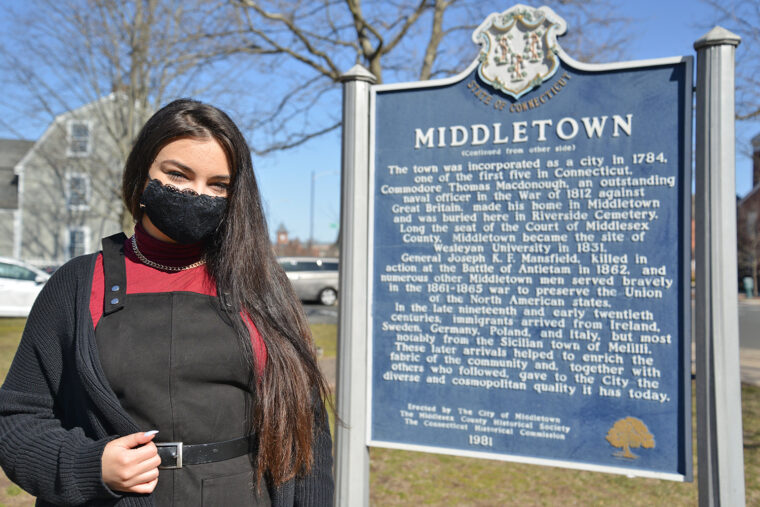 When Emily McEvoy ’22 began her college career at Wesleyan in 2018, she felt a deep sense of detachment from the local environment. At a campus in the middle of her home state, how could this be? The insularity, she says, was jarring, and she decided to dedicate her time to combat this issue.

McEvoy immediately became involved with several local organizations, including Middletown’s North End Action Team, and the student cohort of volunteers who helped staff their office. Most recently, McEvoy has been an organizer with the Middletown Mutual Aid Collective, which has raised close to $70,000 to support Middletown residents in need.

“I developed a love for canvassing the neighborhood,” McEvoy said. “I like personal conversations with people, and I like deeply understanding the histories and issues at the table . . . before I do anything else.”

As Newman Civic Fellow, McEvoy will join 211 other community-committed students from the U.S. and Mexico for access to a variety of virtual and in-person learning opportunities during the 2021–2022 academic year, including a national conference for Newman Civic Fellows. Fellows also have access to exclusive scholarship and postgraduate opportunities that support fellows in their personal, professional, and civic growth.

“In being a part of this cohort of student leaders, I hope to learn what civic engagement looks like at schools wholly different than mine,” she said. “How is civic engagement different at, for example, a state school, where student life, state policy and government, and student home life are all interconnected? How does this make research and practice more or less authentic or personal? How can I use this knowledge to advocate for more grounded forms of higher education, with more solidarity with the surrounding community? I can think of no better function of being in a cohort of other civically-engaged, community-minded college students than creating solutions to combat elitism and exclusivity on the part of universities, and to work with the other fellows toward creating more shared, local, and practice-based modes of education.”

McEvoy, who was raised in Waterbury, Conn., and attended high school in Wolcott, Conn., became a permanent resident of Middletown when her mother, Danette, moved to the city in 2019. McEvoy spent much of her life visiting Middletown, however, and was always drawn to the “mini-city . . . where the urban and the natural combined so beautifully,” she said.

“Sometimes I look at the cork boards on Main Street where people hang flyers, and I feel a rush of nostalgia for late 2017, when my visits to Middletown would invigorate me with a deep, almost instinctive understanding of the creativity and intellect present here. It was tourism for me, largely facilitated and colored by the aspiration I had for Wesleyan. Now that Middletown is my home, I think back on this love I had for it, pre-Wesleyan, and I know I can’t afford to get jaded or complacent. I hope that someday, all local folks can walk out of their front door and feel the same invigoration I did when I was visiting here at 16, and I will work to make that happen.”

In addition to her work with the North End Action Team, McEvoy has held positions in the Wesleyan Student Assembly, the Middlesex Chamber of Commerce, and the Middletown Youth Services Bureau. She also spearheaded multi-stakeholder projects such as Middletown Mutual Aid and asset mapping for Middletown WORKS, a local economic development initiative.

Diana Martinez, assistant director of the Jewett Center for Community Partnerships, met McEvoy through their collaborative work with WesNEAT.

“Over and over again, Emily demonstrates the best qualities of informed, tactful, socially just engagement,” Martinez said. “She gets familiar and re-familiar with the community and their identified interests; she practices ongoing reflection around her privilege and the roles she plays in community; every move she makes has measurable expectations made in the deepest spirit of humility coupled with personal and collective accountability; and she’s an adaptable collaborator—someone conscious of the ways groups, efforts, and movements can build on each other, who seeks to work together with community members toward equitable solutions.”

A College of Social Studies and Sociology double major, McEvoy was nominated for the Newman Civic Fellowship by Wesleyan President Michael Roth ’78.

“‘Town/gown relations’ takes on new meaning when Emily has a seat at the table—or, this year, a square on Zoom,” Roth said in the nomination letter. “Emily’s civic engagement work is expansive in extent and character. She builds coalitions with thoughtfulness, inclusivity, and competence. On any given day, you might find Emily restocking the community fridge, attending a teach-in about tenant unions, facilitating a youth leadership program on restorative justice, or reading for her environmental solidarity book club. She leads graciously and quietly, centering the voices of others rather than her own.”

The Newman Civic Fellowship was created in honor of Frank Newman, one of Campus Compact’s founders and a tireless advocate for the role of higher education in preparing students for active and engaged citizenship.

“I’m tremendously proud to know Emily and to know our roles at Wesleyan can help feed this kind of fire in souls like hers,” Martinez said. “I’m so excited to see what she ignites next.”

McEvoy expanded on her fellowship in a Q&A; excerpts are included below:

What excites you about the Newman Civic Fellowship?

E.M.: Looking at the Newman Fellowship’s Learning Outcomes, I’m most excited to learn more about root cause analysis. This will be valuable to practice in the context of Middletown and Connecticut at large when dissecting systemic issues, and I want nothing more than to bring these analysis tools to the table in any group I organize with. “But why?” is a question that can be so easy to answer, but the hard part is creating solutions that are radical enough to combat the “why” behind social ills. Asking the question is the first step.

Being from Connecticut, what was your relationship with Middletown prior to being a student? And how is it today?

E.M.: My earliest impression of Middletown was that it lived up to its name: Main Street was that cute little mini-city that I’d see on the drive to the casino or Misquamicut Beach, or sometimes Middletown would be a nice central location [in which] to meet up with family who lived in other parts of the state. By my senior year of high school I was driving myself to Middletown all the time, whether I was eagerly anticipating my acceptance letter and scoping out campus, buying my family Wesleyan merch for Christmas at the Wesleyan RJ Julia Bookstore, or taking a spin with a friend to ION Restaurant and Wild Bill’s Nostalgia. RJ Julia was a game-changer for me. I was so surprised to see a public place that proudly displayed “left-leaning” history books and mantras on magnets. It didn’t feel like the same Connecticut.

What organizations are you working with in Middletown?

E.M.: During the upcoming year, three of the main things I’ll be working on, and continuing my work on, will be organizing with the Middletown Mutual Aid Collective (MMAC), my job at the Middletown Youth Services Bureau (MYSB), and coordinating the student community service group, Wesleyan x North End Action Team (WesNEAT).

I understand you’re writing an honors thesis during your senior year. What is your theme?

E.M.: My honors thesis will create a theory of “triangulation” between the state of Connecticut, our colleges and universities, and the nonprofit and grassroots organizing sphere. I’ll be drawing on a vast array of thinkers: from Lenin, to modern-day abolitionists, to scholars of neoliberalism and of the University. Needless to say, I’m beyond excited to bring my personal experiences into this thesis.

Do you have any post-Wesleyan plans at this point? What do you imagine yourself doing after college?

E.M.: I see myself staying in Connecticut and doing community organizing work. Something I love about this state is the abundance of grassroots organizing groups that are so deeply rooted in their respective communities, yet come together in coalition when there’s a need for statewide action. At some point in the next decade, I definitely want to supplement my work with a law degree. While I don’t see myself practicing law, I do see myself using law to find the best ways to support my community, and help others navigate complex systems.

Who has helped inspire you and your work?

previousWesleyan's 189th Commencement to Be Held May 26 In Person