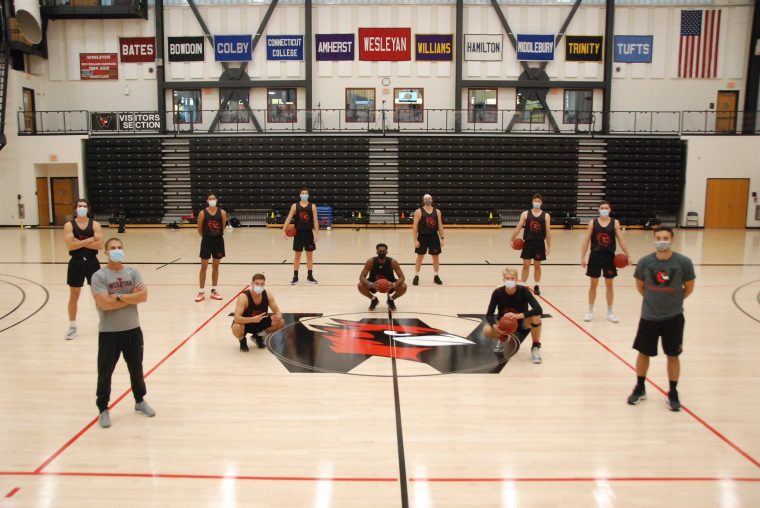 As part of a class assignment for the spring 2021 course Topics in Journalism: The Art and Craft of Journalistic Nonfiction, students were tasked with writing short essays on the continuing battle for normalcy while attending college during the COVID-19 pandemic.

The class is taught by Daniel de Visé ’89, Koeppel Journalism Fellow. After graduating from Wesleyan and Northwestern University, de Visé spent 23 years working in newspapers. He shared a 2001 team Pulitzer Prize and garnered more than two dozen other national and regional journalism awards. He’s also the author of three books.

“The class is about how to write nonfiction using the tools of novel-writing and cinema,” de Visé said. “It’s all based on journalism—fact-based reporting. We’re reading and writing stories that have central characters who overcome literary conflicts in a scene-driven narrative.”

A sampling of the articles are published here and descriptions are below.

Kiran Kling ’24 focused his essay, “The Call” on being a student-athlete during the pandemic. With spring sports canceled during the 2020-21 academic year, Kling explained how the 15 members of the men’s basketball team would gather on Zoom every Wednesday night to share updates, network with alumni, and “crack jokes in the players-only group chat during the call.” Read Kling’s essay online here.

Sophie Talcove-Berko ’21 shared her experience of being a college senior during the COVID-19 pandemic. In her essay, “Ski School,” Talcove-Berko wrote about the difficult decisions her peers made during their final year at Wes: “some deferred, some returned, and some went remote.” Talcove-Berko framed her essay around Tammy Shine ’21 who originally planned to return to Wesleyan this spring for her final semester of college, but instead chose to study remotely in Lake Tahoe. “While it was her final chance to live with her college friends on campus, she found the mountains rejuvenating for the mind, body, and soul,” Talcove-Berko wrote. Read Talcove-Berko’s essay online here.

Shakka Chaiban ’22 tells the story of Norm Cotteleer ’22 in her essay titled “COVID Cabin Fever.” During the pandemic, Norm and two of his classmates moved to Utah seeking “a desire to explore new lands.” The isolation however led to COVID cabin fever, and “the general vibes of the household grew increasingly combative and toxic, cramped proximity bringing the worst out of each housemate.” Read Chaiban’s essay online here.

Rose Merjos ’23 compared the student band scene of 2019 to 2021 in her essay titled “How Student Bands Live on During COVID-19.” She uses Love, Grandma guitarist Liam Murray ’23 as her main character, and explains how he was able to express his passion for music by organizing a show over Zoom where students performed from their rooms at Wesleyan and across the world. “The patterned tapestry and flickering string lights hung up in his room emulated a concert hall. In a tiny box adjacent to Liam’s on the Zoom screen, the band’s vocalist, Gib Bernath, sang into a mic in his room two doors down from Liam. After the performance, the applause bellowed out from his computer. “We love Love, Grandma!” two girls shouted.” Read Merjos’s essay online here.

An essay by Mabel Shao ’23, titled “A Birth of Love in the Midst of the Pandemic” spotlights Wesleyan students Zara and Leon who are in the second semester of their sophomore year. “One is remote; the other is on campus. One is coping with the hardships of distance learning; the other is dealing with the loneliness and homesickness of being more than 10,000 kilometers from home. One misses campus life; the other pines for the warm family life of home. Sometimes they wish they could swap lives. And they share a common hope: to see each other in person for the first time since their relationship began.” Read Shao’s essay online here.

In her essay, “A Tin Can of Friendship Beans,” Chapin Montague ’21 tells the story of Michayla Robertson-Pine ’22 and Elizabeth “Liz” Woolford ’21 who created a virtual after-school learning community for children called Tin Can Learners. “To unpack the world of Tin Can Learners is to fall down a rabbit hole of chaotic genius and layers of lore that makes you wish you were part of the gang,” Montague wrote. Read her essay online here.

Rory Curtain ’23 writes about Anabel, who chose to defer a semester during the pandemic in her essay titled “Time Away Offers Clarity.” After moving to Holyoke, Mass. with two other roommates for a few months, “it was obvious to Anabel that she wanted to resume being a full-time student. Above all, Anabel recalls, it ‘just felt right’ to come back to the campus they had slowly grown to miss.” Read Curtain’s essay online here.

previousMerjos '23: "How Student Bands Live on During COVID-19"