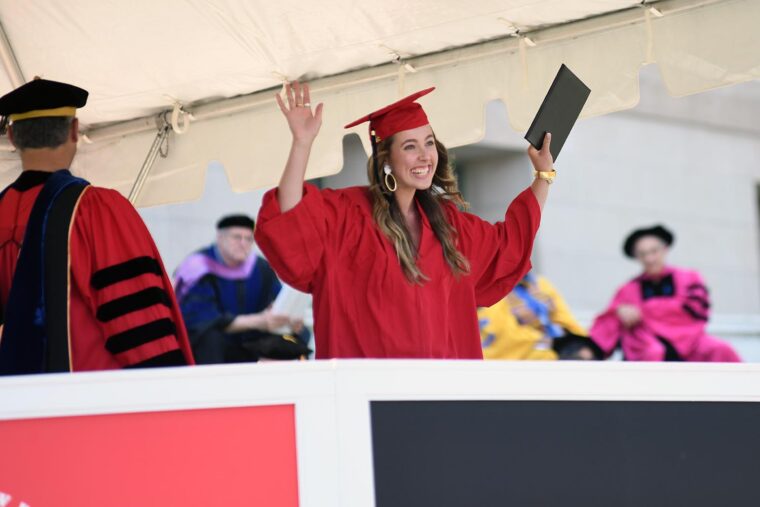 Perseverance, pride, progress, and graduating during a unique moment in history were on the minds of the hundreds of graduates and their families at Wesleyan University’s 189th Commencement ceremony on Wednesday.

“It was a difficult year,” said Aidar Raev ’21, a Posse Veteran from Kyrgyzstan who majored in the College of Social Studies with minors in international relations and Russian, East European, and Eurasian studies. (The Posse Veterans program supports veterans of the United States armed forces who are earning bachelor’s degrees at American universities.) Raev decided to study remotely during the spring semester but returned to campus to walk in Commencement.

“It was important to me to be here today,” he said, as he prepared to line up for the traditional procession onto Andrus Field. “I’m a first-generation American; my parents got degrees in the Soviet Union but I got naturalized here in America when I joined the military.” Completing his degree was “a 13-year journey.”

Nearby on Foss Hill, Julio Evans ’21 described a similar feeling of accomplishment. “I’m a first-generation college graduate, so being here at Commencement today means breaking a lot of chains for my family and starting a legacy,” he said. An American studies major and Caribbean studies minor from Brooklyn, Evans said he planned to move to Miami after graduation to pursue his interests in political activism and social justice by working as a peer advocate.

Juliet Dale ’21, a government and American studies major, said she was simply feeling grateful to be able to walk in an in-person ceremony, which she felt was a “rare opportunity” compared to the experiences of her peers at other colleges.

Raev, Evans, and Dale were just three of the 709 undergraduates who were to receive bachelor of arts degrees from Wesleyan this year. In addition, Wesleyan was to confer 10 bachelor of liberal studies degrees.

Graduate degrees included 38 master of arts degrees; 21 master of arts in liberal studies degrees; and nine doctor of philosophy degrees. (At press time and at the time of Commencement, the number of graduates earning degrees was not official. Degrees will be officially conferred by Wesleyan’s Board of Trustees on May 28, 2021.)

Adjusting his cap and gown with his classmates in front of the Graduate Liberal Studies (GLS) office, Dave Walsh MALS ’21 reflected on the excitement of the day, which was a long time coming. “I got my bachelor’s 36 years ago, and the GLS program has made it possible for me to fulfill the lifelong dream of earning my master’s,” he said.

Culmination of an Unusual Year

For many in attendance—as well as a number of graduates attending virtually and even more family and friends watching the live broadcast via Wesleyan’s Commencement 2021 website and Facebook page—the sunny and warm day concluded an unusual academic year—one filled with social distancing, the wearing of face coverings in public, and twice-weekly COVID-19 testing for the campus community. Guests were not permitted on campus, and travel off-campus was restricted throughout the 2020–21 academic year.

However, thanks to vaccination efforts nationwide, the University’s recent efforts to offer the vaccine to on-campus students, and more flexible guidance from the Centers for Disease Control and Prevention (CDC) as well as the state of Connecticut, a limited number of guests were permitted to attend the in-person Commencement, which was held in a socially distanced manner. Guests were required to be fully vaccinated by May 26 or have received a negative PCR test in the days prior.

Seated in the audience, Tamar Wyschogrod, David Cooper, and Aaron Cooper, the parents and brother of graduate Tracy Cooper ’21, said they were feeling thankful to “enjoy Wesleyan one last time.”

“We were worried we wouldn’t have an in-person ceremony,” Wyschogrod said. The family had been unable to go to their other children’s graduations due to the pandemic, “so this graduation was the only one we actually got to attend! It feels great.”

The COVID-19 pandemic and its impact were a common theme of speakers’ remarks.

“It is so good to see you in person!” President Michael Roth ’78 said in opening the ceremony. He acknowledged that the “mighty Class of 2021” had experienced “a final three semesters that will be indelibly stamped on our collective memory for many years to come. The difficulties you faced and your uplifting responses to them will not be forgotten.” He asked for a moment of silence to acknowledge those who had passed away over the past year.

Senior Class Speaker Bryan Chong ’21, a government and psychology double major from Hong Kong, reflected on the unexpected and sometimes humorous ways in which he and his classmates experienced their final year, as many class sessions were held virtually. “There is nothing quite like waking up two minutes before class knowing that you can still make it on time,” he joked.

Focusing on the theme of juxtaposition, Chong described how Wesleyan students have confronted hardship and injustice through acts of solidarity. He expressed confidence that his class would make the most of their unique experiences, and even differences and divisions, to move forward in solidarity.

Reginald Dwayne Betts, an award-winning poet, memoirist, and teacher who received an honorary doctorate of letters during the ceremony, focused on the theme of time and the way that “these pandemic days have turned time different.”

Recalling how he was sentenced to nine years in maximum security prison at age 16, Betts drew comparisons between the passage of time during the pandemic and during a prison sentence. Prison cells slow time “in ways similar but so distinct from COVID,” Betts said. “I know that the graduates here, their parents, we all understand some of that burden now. Understand what it means to not know when or if you will walk amongst your friends again.

“And yet, there’s something about time that shows us our mettle. I mean, who could really study amidst such tragedy? And yet you did.”

Among the day’s graduates were the first cohort of incarcerated and returning citizens to earn their bachelor of liberal studies through Wesleyan’s Center for Prison Education (CPE). The bachelor of liberal studies (BLS) degree is open to the general public, and students take courses on a per-credit basis. In 2020, the New England Commission on Higher Education (NECHE), Wesleyan’s accrediting body, approved the establishment of additional instructional locations at Connecticut’s Cheshire and York correctional institutions, so that incarcerated CPE students would have an opportunity to earn BLS degrees.

Scott Gottlieb ’94, a physician, public health and policy advisor and advocate, who received an honorary doctorate of science, focused on the path forward from the pandemic. He described how the pandemic exposed “protracted social ills that have hurt too many for too long.”

In addition, political divisions—”even on seemingly obvious things like wearing masks or getting a vaccine”—posed significant challenges, said Gottlieb, who served as the commissioner of the Food and Drug Administration (FDA) from 2017 to 2019. He urged graduates to bring the Wesleyan spirit of activism with them into their communities.

Catherine Coleman Flowers, a renowned environmental health advocate who also received an honorary doctorate of science, implored the graduates to help “quickly dismantle the historical and structural inequities that have existed in this country since its inception.” To address the deep divisions in political discourse, she said graduates should start by simply listening.

Echoing Flowers’s call for open-mindedness, President Roth said that he was counting on graduates to use their unique perspectives and skills to make a difference, and “to seek out those from whom you can gain new perspectives and ideas precisely because they don’t share your point of view.”

“A university is a place to have one’s ways of thinking tested—not just protected,” he said. “If we are to repair our public life, we must develop habits of mind and spirit that allow us not just to celebrate our differences from mainstream culture but to learn how to positively impact it.”

Four faculty members were awarded honorary master of arts ad eundem gradum: Erika Franklin Fowler, professor of government; Barbara Jean Juhasz, Jeffrey L. Shames Professor of Civic Engagement; Hari Krishnan, professor of dance; and Phillip Resor, professor of earth and environmental sciences. The degree is awarded to members of the faculty who are not graduates of Wesleyan at the bachelor’s level and have attained or been appointed to the rank of full professor.

The ceremony concluded with a Word of Blessing from Rabbi David Leipziger Teva, director of religious and spiritual life, followed by the singing of the “Alma Mater” and the Wesleyan “Fight Song.” Due to pandemic-related precautions, all of the music during and before the ceremony (including the processional music featuring the Taiko Drumming Ensemble) was prerecorded.

As attendance was restricted to graduates and their guests, this year’s Commencement ceremony was broadcast live, via the Commencement 2021 website and Wesleyan’s Facebook page.

For more information about this year’s Commencement, as well as recordings of the speeches, please visit the Commencement 2021 site.

Please note: In accordance with the Centers for Disease Control and Prevention (CDC) and the state of Connecticut, Commencement participants and guests who were fully vaccinated were given the option to remove their face coverings during the ceremony. Wesleyan University continues to follow campus safety guidelines. For more information, please visit the Keep Wes Safe website.