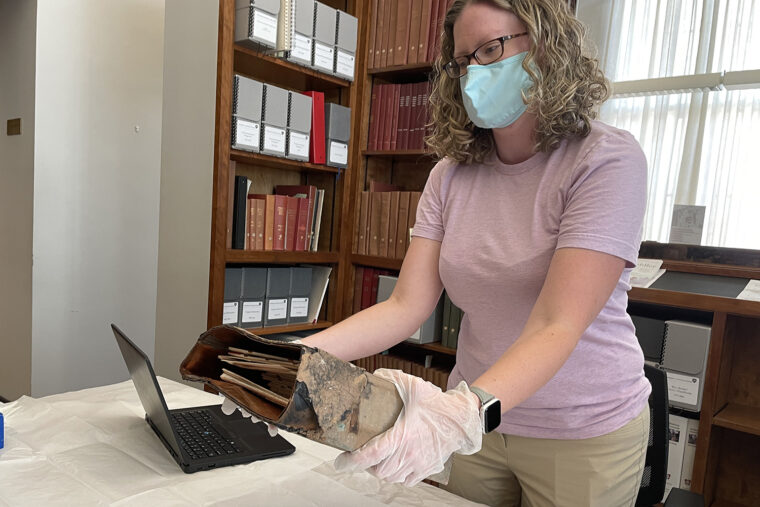 The ongoing demolition of the 1954 wing of the Public Affairs Center (PAC) yielded a touch of history on Sept. 17 when crews unearthed a time capsule sealed into the concrete entry slab on the east side of the building.

A demolition contractor found a partially damaged copper box that had been encased in concrete. The outside of the box was green and brown with oxidation and dirt, but the inside retained its original bright sheen and color. This particular contractor had seen time capsules on other building projects and knew what he was dealing with.

He approached Michael Rosalie, facilities project manager, and Rosalie’s team brought the box to Amanda Nelson, university archivist at Olin Library’s Special Collections and Archives. “They just sort of showed up at the door and said, ‘Here is a time capsule,’” Nelson said.

Apparently, this time capsule isn’t the only one nestled around campus. Somewhere in the university archives, a list of the locations of all the campus time capsules exists. But this particular find took everyone by surprise.

Word about the recent find spread quickly. A team from University Communications was dispatched to document the opening. Andrew White, Caleb T. Winchester University Librarian, planned to display the contents in the library. People around campus were interested to learn what the time capsule contained.

On Sept. 21, Nelson and Maggie Long, special collections cataloging librarian, removed each item from the box for the first time and carefully placed them on a table covered with a white sheet. “Here are some gloves for anyone who wants to touch anything that comes out of the box,” Nelson said.

The first item they pulled out was a copy of the Oct. 22, 1954 edition of the Wesleyan Argus announcing the groundbreaking of the new PAC building. Next up, The Circuit Rider, a development program newsletter. Course listings. Class directories. A $20,000 library budget for books (“We spend much more than that now,” White deadpanned.) Board minutes. Financial reports.

A pristine, glossy viewbook was the star of the capsule, a snapshot of what people believed would be the selling point of the University in 1954. The paper was unblemished, the staples only slightly rusted.

Nelson carefully entered each item on an Excel spreadsheet. The entire collection would be cataloged online, placed in acid-free boxes and folders for preservation, and made available to researchers, she said. She planned to talk to a member of the Archaeology Department to determine the best way to preserve the copper box itself. “We’ll be excited to show it off,” Nelson said.

The capsule was a trove of Wesleyan institutional information, the kind of thing administrators at the time would’ve thought was important to note. While the publications certainly captured the spirit of the time the capsule did miss a human touch. “To me, the nicest thing would’ve been if there was something handwritten included,” Nelson said.

“So, if you ever do a time capsule, remember, handwritten notes,” said Melissa Rocha, Wesleyan’s video producer.

Additional images of the time capsule’s opening are below: