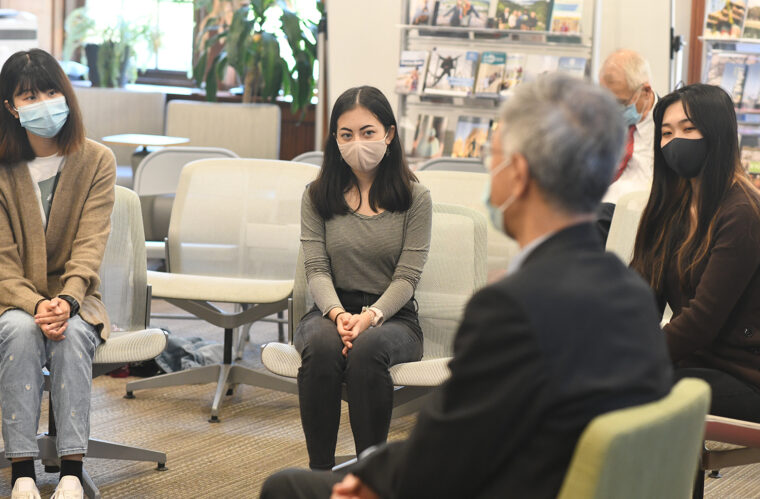 Felice Li ’25 met, mingled, and offered a campus tour to one of Japan’s sōryōji—or consuls general—during a recent visit to Wesleyan.

“As a new student here, I felt very excited to show the consul general our campus and what I had explored here so far,” Li said. “I lived in Tokyo before coming here, so I was excited to present the tour in Japanese.”

Li was among several students and faculty who spent the day with Consul General Setsuo Ohmori, who is the highest-ranking Japanese consul in Boston. The CG supports the safety and stability of the Japanese people, and works to build upon the friendship between Japan and the United States.

“I wanted the Consul General to see diversity at Wesleyan, especially the geographical background of our students— students from all over the world—who study the Japanese language in one classroom at this small liberal arts college in New England,” said Naho Maruta, associate professor of the practice in East Asian studies. “I also wanted our students to feel a real sense of achievement of being able to communicate in Japanese—the language they have been learning at Wesleyan, by having a conversation with the Consul General and leading a campus tour for him entirely in Japanese.”

During his visit on Oct. 14, Ohmori let a public talk on “The Dawn of Japan and U.S. Relations” at Fisk Hall, and met with Middletown Mayor Ben Florsheim ’14; Wesleyan Provost Nicole Stanton; and several CEAS faculty and students. Ohmori was accompanied by Gregory Boyko, honorary Consul General of Japan in Connecticut and Hideshige Sakurai, assistant to the Consul General of Japan in Boston. His visit concluded with the campus tour.

Li and Ann Zhang ’22 began the tour at North College and made stops at the Patricelli ’92 Theater, 200 Church (Li’s student residence), Olin Library, and Andrus Field.

“I think he is a very interesting person, and I think he’s very knowledgeable,” Li said. “He showed great interest in the Japanese books at Olin Library. He took out a book, The Memory Police from the shelf, and showed it to me and said, ‘This book is very interesting.'”

Ohmori explained to Li and Zhang that he was born near Izumo, a place famous for Izumo Taisha—a shrine about romantic relationships. Zhang noted that she has heard of this “shrine of love” and Li mentioned that they visited the shrine in May.

“Since you guys are at Wesleyan University now, you might as well find your partners,” Ohmori said at the conclusion of the tour. “Bless you on behalf of the Kamisama (God) Kamiarizuki Izumo (The month of the Gods)!”Ohmori’s visit to Wesleyan was originally scheduled in April 2020, but due to the pandemic, it was postponed until now. “We’re so glad we finally made this visit happen and the students could meet with the Consul General in person this year,” Naho said.

Ohmori isn’t the first Consul General to visit Wesleyan. In October 2017, then CG Rokuichiro Michii visited campus and led a talk in both English and Japanese.

Photos of CG Setsuo Ohmori’s visit to Wesleyan are below: (Photos by Olivia Drake) nextBoard of Trustees to Extend President Roth's Contract Through 2026