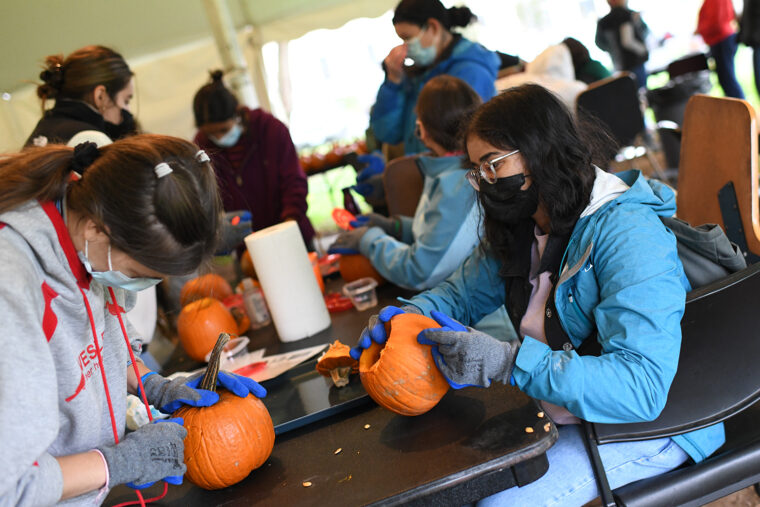 An art form discovered more than a million years ago by hominids is being kept alive today by a Wesleyan sophomore.

On Oct. 27, Cooper shared their handiwork and knowledge with fellow students during a practical—and traditionally seasonal—activity: pumpkin carving. Sponsored by the Archaeology Department and Archaeology & Anthropology Collections, Cooper and Archaeology Collections Manager Wendi Field Murray led the inaugural “Pumpkin Carving with Stone Tools” outreach program at the Hogwarts Tent. Participants not only carved a pumpkin using Cooper’s stone tools, they also learned about the history and function of different stone tools through time.

“For millions of years, stone was central to the material culture and tool technologies of human societies. People used stone tools for hunting, butchering and meat processing, cutting, drilling, puncturing, scraping hides, incising, and a variety of other activities—though likely not pumpkin carving!” Murray said. “The tools you are using today were modeled after different lithic (i.e., stone) technologies from around the world.”

Flintknapping falls under the archeology and anthropology umbrella because it represents material culture, Cooper explained. “By analyzing evidence from stone tools, we can learn about both behavior and cultural values of prehistoric communities.” For example, tool analysis of Ötzi the Ice Man, who lived approximately 5,300 years ago, shows that Ötzi made his tools from a chert deposit several miles away from where his body was found, and he also owned a copper axe, rare at the time.

“For the most part, stone tools are associated with communities that left little documentation or used short-lived organic media to document with,” Cooper said. “Stone has the advantage of lasting far longer than any organic evidence ever could, allowing insight into many human communities that would likely have otherwise vanished from the archaeological record.”

Participants were introduced to several stone tools including projectile points, bifaces, flakes, scrapers, awl, knives, and burins/gravers. Each uniquely named piece of stone serves a particular function, from cutting plants and animals to engraving wood, shells (or in this case, pumpkins.)

“For archeology demonstrations, reproduction experiments, and for learning delicate techniques I prefer moose, deer, and elk antler tools bought from suppliers as well as hammerstones I collect,” Cooper said, who led a live knapping demonstration during the pumpkin carving. “When I have a large order of pieces to produce I prefer to use my homemade copper tools because they are faster and more durable. This pumpkin carving project was actually such a large order that one of my primary tools has been worn down all the way through the metal.”

Nina Hirai ’23, who is majoring in anthropology, film, and archaeology, previously learned about the archaic tools in her classwork, but this was her first time putting them to use.

“It was definitely a unique experience and it was definitely easier than I thought it would be but still fairly difficult,” Hirai said. “I had never actually gotten to use any of these tools despite handling them and learning about them through various contexts so I felt like this was a new, fantastic way to learn more about the actual handling and using of stone tools! While I had a great time carving pumpkins with stone tools, I am definitely glad we have modern-day knives and other utensils.”

Zachary Klang, a graduate student in earth and environmental sciences, set out to carve a horseshoe crab, but it ended up a stingray. After hollowing his pumpkin, Klang used a biface to make a deep outline and carved out a wider linear notch at a 45-degree angle. He used a scraper to even out the surface— with some difficulty.

“The biggest problem I had was with the durability of the chert scraper tool. The cutting edge continually broke off as flecks so I had to rotate it in my hand to maintain an edge,” Klang said. “Generally I am pleased with my result though! I gave the horseshoe crab eyes with an awl stone tool which immediately made it look like a stingray, so I leaned in and used the biface to give it gills.”

When Fletcher Levy ’23 sat down to begin carving his pumpkin, he observed the various blades, flakes, and scrapers available, and settled on the scraper to remove the pumpkin’s innards. “Remarkably, it was an even better pumpkin gut scooper than any plastic spoon I’ve ever used,” he said.

After scooping, Levy decided to engrave the image of a Minion of the Despicable Me franchise onto his pumpkin. He used the flake tool’s sharp edges to gouge the pumpkin, which made for near-perfect cuts. “Overall, the experience was a great opportunity to see these tools in action and learn more about the work that goes into experimental archeology,” Levy said. “I’m looking forward to carving pumpkins with stone tools again next year!”

Photos of the “Pumpkin Carving with Stone Tools” program are below: (Photos by Olivia Drake)