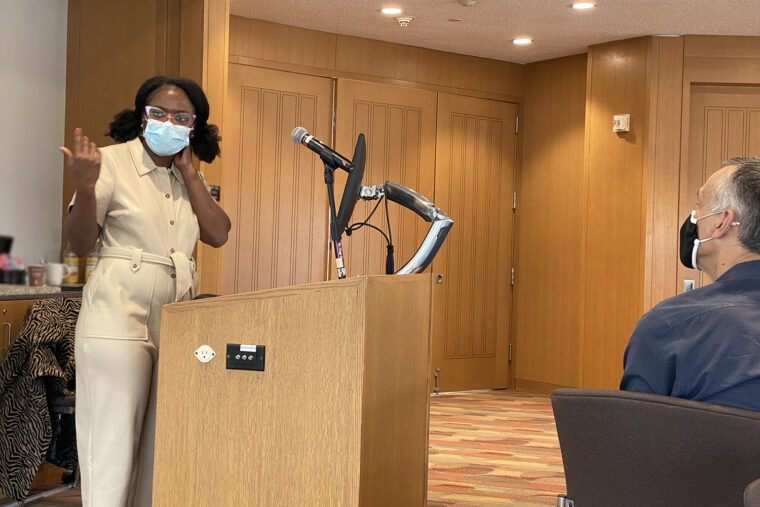 While it’s considered acceptable, or even expected, for women to cover fine lines and wrinkles with makeup, creams, injectables, or undergo cosmetic procedures like facelifts as they age, the idea of altering skin tone—especially for Black and brown people who are the most likely to face colorism—is a newer, and oddly popular, skincare craze.

Autry, a critical sociologist, is an expert on topics related to racial identity, Blackness, and memory studies. On Nov. 17, she delivered a talk titled “Bleach, and Other Performance Enhancing Drugs” as part of Wesleyan’s staff luncheon series.

The face-whitening trend is booming in America, especially among Black celebrities. Autry showed “before and after” images of professional baseball player Sammy Sosa; model Blac Chyna; and musical artists Beyonce, Rihanna, and Nicki Minaj—all of whom have been accused of transforming their dark skin to light brown or even white. Their bright faces are frequently framed by silky blonde hair.

Dominican Republic native Sammy Sosa, in particular, “has always stood out to me not for his athletic ability but for his open embrace of skin bleaching and other modifications to his hair texture and eye color,” Autry said. “A couple of years after he retired in 2009 some commented on his lighter complexion, but it would be several more years before he reappeared at the 10-year anniversary of his retirement looking undeniably bleached out. Sosa admitted to using bleaching creams; he used them every night to soften his skin, and they happened to also lighten it.”

“Many of her fans and other observers felt betrayed and insulted by the blatant disavowal of dark skin as a problem to be treated or corrected. Others saw it as a money grab noting that it’ll cost you $250 to get a 3.5-ounce jar of the signature lightening cream,” Autry said.

Sammy Sosa and Blac Chyna, along with a handful of other celebrities like rapper Azealia Banks who compared whitening her skin to wearing a weave, stand out “because they neither deny nor apologize for desiring lightened complexions. And Black people are not expected to admit to skin bleaching let alone desire it,” Autry said.

Blackness, Autry says, carries with it a demand for the truth, a claim to authenticity that is wrapped up in notions of being and looking natural. She wonders if a natural skin movement will follow in the footsteps of the recent natural hair movement. “Will I one day proudly declare ‘Oh, I wear my skin natural.’ What would that mean? No concealer? No more cat eyes?”

Several of Autry’s comments brought chuckles to the 50 staff members in attendance. And she also led a Q&A following the talk. Others continued to discuss the idea of skin-bleaching after the event.

“Professor Autry was engaging and funny, and it seemed clear that she was eager to share her insights. It was such a compelling new set of ideas and I left curious to know more,” said Anne Marcotty, senior designer in University Communications. “I was interested to learn that there is a social shame (judgment) associated with skin bleaching similar to steroid use in athletes, which suggests that there’s a belief that making one’s skin lighter is akin to cheating. It made me wonder about the nature of cultural meaning, and how deeply ingrained certain beliefs/prejudices are, for instance, the way white people getting a tan has changed meaning as labor and leisure practices have changed over time.”

Autry noted that America’s desire for liquid bleach skyrocketed during the COVID-19 pandemic, and Clorox ranked No. 1 in the 2020 Axios Harris Poll that ranks corporate reputations. Of course, the bleaching agents used to whiten skin are different from the ones used to whiten laundry and disinfect counters and floors. Whitening face creams contain hydroquinone—a topical skin-bleaching agent, which was banned from over-the-counter beauty products in the U.S. in 2020. Nevertheless, Vogue estimates that by 2027, the skin whitening industry is projected to be worth more than $27 billion dollars.

“What’s more important to me is that the word ‘bleach’ and ‘bleaching’ is used to talk about skin lightening,” Autry said. “Many people view bleach as the ‘gold standard’ for household cleaning of all sorts, and not just during pandemics. Bleach has corrosive properties and has also been linked to a number of health concerns from skin irritation to respiratory illness.”

Skin “bleachers,” then, are in a way “enhancing their performances by scrubbing themselves clean,” she said. “Or that’s the idea anyway.”