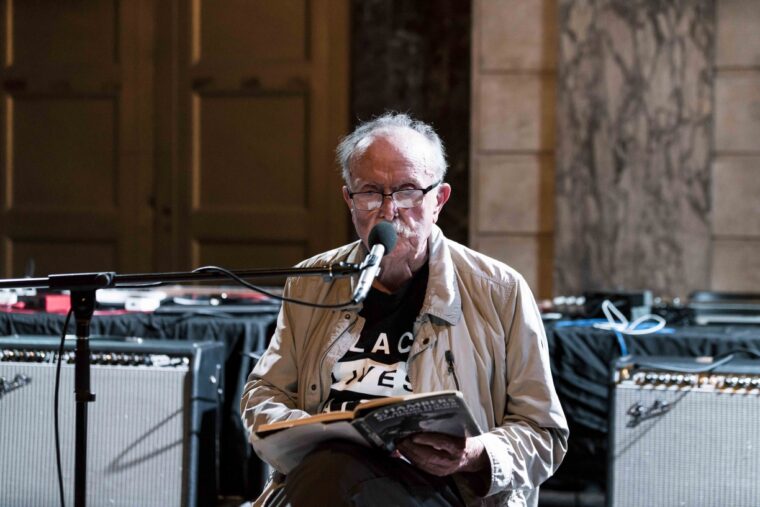 Alvin Lucier, John Spencer Camp Professor of Music, Emeritus, died on Dec. 1 at the age of 90.

Lucier received his BA from Yale University and his MFA from Brandeis University. He joined the Wesleyan faculty as a visiting professor in 1968 and as an associate professor in 1972. He taught here for 43 years before retiring in 2011.

A pioneering composer, Lucier was at the forefront of American avant-garde music. He lectured and performed throughout the United States, Europe, and Asia. In 1994 Wesleyan celebrated his career with a five-day multimedia festival, Alvin Lucier: Collaborations, which included new work by Lucier and collaboration with Sol LeWitt, among many others. Daniel Wolf is quoted in the program book: “In preference to words or musical notation, he chooses images of sounds, that is, sounds isolated as much as possible from both linguistic and musical syntax and returned to the immediacy of perception.”

“Alvin Lucier came to Wesleyan as a groundbreaking composer of iconic works,” said Mark Slobin, Winslow-Kaplan Professor of Music, Emeritus. “His geniality, expert mentoring, and decades-long anchoring of experimental music gave the department worldwide visibility. His all-encompassing interests, from literature and the visual arts to scientific inquiry, made him a unique figure and strengthened both the depth and breadth of a department dedicated to the widest possible understanding of ‘music’ and the importance of collaborative work.”

President Michael Roth said: “Alvin Lucier recognized that by paying attention otherwise we could alter – even expand – our relations with the world. He was an exemplary Wesleyan teacher and artist.”

Professor of Music Ron Kuivila, a former student of Lucier’s, remarked: “His keen ear and profound understanding of performance enabled him to create pieces whose form and substance drew on brain waves; the echolocation of bats; whale song’s ability to traverse enormous distances; the resonances of rooms, of small objects, of long wires; and the physical spatiality of sound. These pieces have ingenuity, wit, and verve and they always allow the attentive listener to make a discovery. It is no surprise that the same can be said of his teaching, where his deep knowledge of music, great sense of humor, and singular ability to tell a story always created a sense of discovery.”

Alvin is survived by his wife, Wendy Stokes, and his daughter, Amanda Lucier. In lieu of flowers, please direct donations to the Foundation for Contemporary Arts in honor of Alvin Lucier. A memorial concert and celebration will be held in the future.