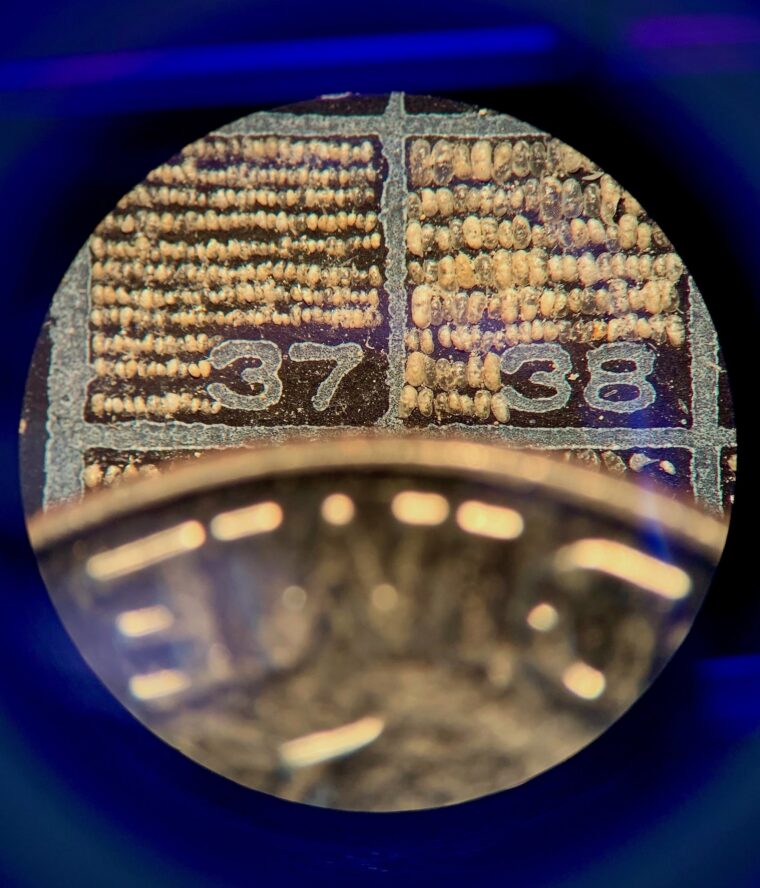 Haley Brumberger BA/MA ’21 captured an image through a microscope of tiny crustaceans called ostracods in sediments of a volcanic lake in Oregon during the 2019 program for Wesleyan Summer Research in the Sciences, which she participated in as a summer research fellow through the College of Integrative Sciences. The image first won the Summer Research in the Sciences Image Competition for 2019 before winning this year’s image competition for The Micropalaeontological Society (TMS). They announced her win on Twitter, as well as through the RedBubble merchandise they’re selling of the image.

Brumberger, who majored in earth and environmental sciences and English and minored in Integrated Design, Engineering, and Applied Science (IDEAS) before doing the BA/MA program in Earth and Environmental Sciences, conducted her research with Harold T. Stearns Professors of Integrative Sciences Emeriti Ellen Thomas and Johan Varekamp.

Brumberger elaborated how the image she took of the ostracods, which are shrimp-like and microscopic, relates to her work.

“[The image shows] painstakingly organized ostracod valves made of calcium carbonate, secreted by tiny microscopic crustaceans (relatives of shrimps) that reside in Paulina Lake, which is one of the Twin Crater Lakes located in the caldera of the Newberry Volcano just south of Bend, Oregon,” Brumberger said. “This slide represents countless hours of staring into the twin lenses of a Zeiss stereomicroscope armed only with a tiny paintbrush and a tiny vial of water. The edge of a dime is included simply for scale.”

She expressed her joy at the image garnering multiple prizes and emphasized how validating this has been for her in combining her interests in science and creativity.

“It means that someone looked at my picture and thought it was as cool and interesting as I did,” she said. “Plus, it took me so long to arrange the ostracod valves on the slide like this that it is really nice for it to be appreciated in an aesthetic way (in addition to in a scientific way)!”

Brumberger, who is in the process of applying to PhD programs in the Earth and Environmental Sciences field, hopes to work either as a professor or in a museum in a capacity where she can both conduct research and help others learn about the field.

“I have also always dreamt of creating (via collaboration with a scientific illustrator or simply by myself, since I have some artistic ability) a middle-school-level graphic novel or infographic series about some fundamental Earth Science topics, if simply to expose a young-ish demographic to their wonders,” Brumberger explained. “Basically, because I am so passionate and excited about the research I have done and will be doing, I believe it is my responsibility to try my best to also engage and excite other people (scientists and non-scientists alike)!”

She also reiterated the importance of making scientific information accessible to everyone.

“Because scientific truths exist regardless of whether people actively engage with or push back against them, it is imperative for scientists to try to break down the barriers that stand between scientific literature and the general public understanding of science and the scientific process,” Brumberger said. “I believe that a major component of conducting scientific research should be ‘doing the translation work,’ which could take the form of a ‘plain English’ abstract, a short video, a cartoon, or something else that is generally easier to digest for—and enticing to—non-experts…sort of a halfway point between published scientific literature and popular science articles.”