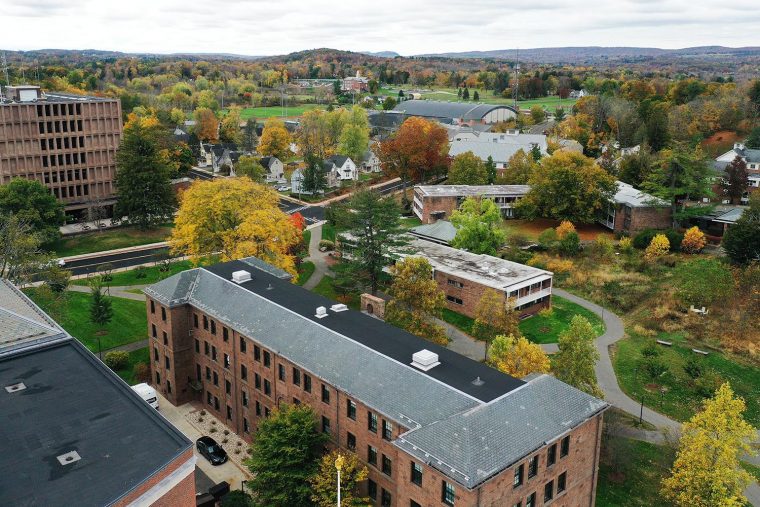 In The New York Times, Wesleyan President Michael Roth ’78 writes an op-ed titled “Anxiety About Wokeness Is Intellectual Weakness.” Like all stereotypes, “the image of the woke college student suppressing the speech and thought of others is wildly misleading. My 40 years in higher education have shown me that no student wishes to fit such a stereotype, and the reality is that few actually do.” (Nov. 18)

Roth also spoke to NPR about Wesleyan requiring COVID-19 booster shots for those residing on campus this spring. “There’s no good reason to hesitate,” he said. “Some people don’t like to be first. But in this case, being first for public health doesn’t seem to be a particularly risky place to be.” (Dec. 3)

Art Daily reports that composer Alvin Lucier, an influential experimental composer and John Spencer Camp Professor of Music, Emeritus, “died on Wednesday, Dec. 1, 2021, at his home in Middletown, Conn., where he had taught for decades at Wesleyan University. He was 90.” (Dec. 1)

Peter Rutland, and Jennifer Tucker are co-authors of a new Conversation piece titled “Stephen Sondheim’s ‘Assassins’ lays bare the bizarre role of guns in American culture.” To Sondheim, “assassins, like everybody else, are in pursuit of the American dream. As they battle delusions, fight against perceived political injustice, long for celebrity or seek community, they turn to guns to accomplish their goals.” (Dec. 7)

Andrew Curran and Henry Louis Gates Jr. write about “Inventing the Science of Race” in The New York Review of Books. (Dec. 16)

In The New York Times, Jennifer Finney Boylan ’80 writes an op-ed titled “Rudeness Is On the Rise. You Got a Problem With That? (Dec. 4)

The White House, via Politicians Post, announces that Dr. Lael Brainard ’83 was nominated by President Biden to serve as vice chair of the Board of Governors of the Federal Reserve System. “We can’t just return to where we were before the pandemic, we need to build our economy back better, and I’m confident that Chair [Jerome] Powell and Dr. Brainard’s focus on keeping inflation low, prices stable, and delivering full employment will make our economy stronger than ever before,” Biden said. (Nov. 22)

In The Crimson White, Neely Bruce, professor of music, comments on Heaven’s Gate cult member Marshall Applewhite. The two were students together at the University of Alabama. “His singing was truly remarkable, and I like to remember him as a very good singer who had a lot of charisma on the stage,” Bruce said. (Nov. 18)

In NewsWise, Candice Etson, assistant professor of molecular biology and biochemistry, is lauded for being a co-principal investigator for a $701,000 National Science Foundation (NSF) grant. The grant will be used to establish a collaborative network of experts to identify evidence-based inclusion strategies to collect consistent demographic data of society memberships, better integrate scientists in transitional career stages into scientific society activities, and diversify the ranks of scientific society leaders. The resulting strategies and standards will be reported and disseminated through open access training materials and publications. (Nov. 18)

A study led by Y. May Chao ’06 is featured on MedicineNet. Chao discovered that Hispanic males were most likely to practice weight control, while white males were least likely. “Considering that males have negative attitudes toward treatment-seeking and are less likely than females to seek treatment, efforts should be made to increase awareness of eating disorder symptomatology in male adolescents, and future prevention efforts should target male as well as female adolescents.” (Nov. 23)

Aaron Lammer ’03 is featured in Yahoo! Finance for co-writing the “Keeping Up With the Kardashians” theme song, making music with Drake and Kanye West, and creating longform.org, a website got famous in media circles for showcasing long pieces of good journalism. (Nov. 29)

On Yahoo! News, Jeanine Basinger, Corwin-Fuller Professor of Film Studies, Emerita, says it wasn’t only the constant exposure that turned “It’s a Wonderful Life” into a classic, was also the TV medium itself. “On TV, where you’re in your own home at Christmas, surrounded by your family, was a different kind of viewing experience,” Basinger said. “People could absorb the darkness without feeling defeated by it.” (Nov. 26)

The Middletown Press reports that 77% of Wesleyan students who were eligible voted in the 2020 presidential election, earning a Gold Seal from the “ALL IN Campus Democracy Challenge,” an increase of 10 percent from the previous presidential election. While civic participation is embedded in Wesleyan’s DNA, this level of turnout is due to a sustained voter registration effort, said Diana Martinez, assistant director of the Jewett Center for Community Partnerships. (Nov. 24)

While more than 1,000 colleges have required COVID-19 vaccination for students or employees, so far it seems that only a small number have taken the additional step of requiring boosters. Inside Higher Ed reports that “Wesleyan University in Connecticut announced Nov. 23 it would require all students and employees to receive a booster vaccination before the spring semester as part of its existing COVID-19 vaccination requirement.” (Dec. 1)

In the Stamford Advocate, Jim Powers ’75, MALS ’88, CAS ’92 talks about managing the Quinnipiac Dawnland Museum. “As a kid playing in the woods, when my friends and I played cowboys and Indians, I had to be an Indian. I was drawn to it. I found their culture, the little I knew about it, fascinating.” While at Wesleyan he became friends with Native American students. (Jan. 5, 2022)

The Middletown Press reports that Wesleyan has significantly lower COVID-19 infection rates than the city. Wesleyan University staff and students are tested twice each week. (Nov. 29)

nextStudents Seek Ways to Engage with the Middletown Community