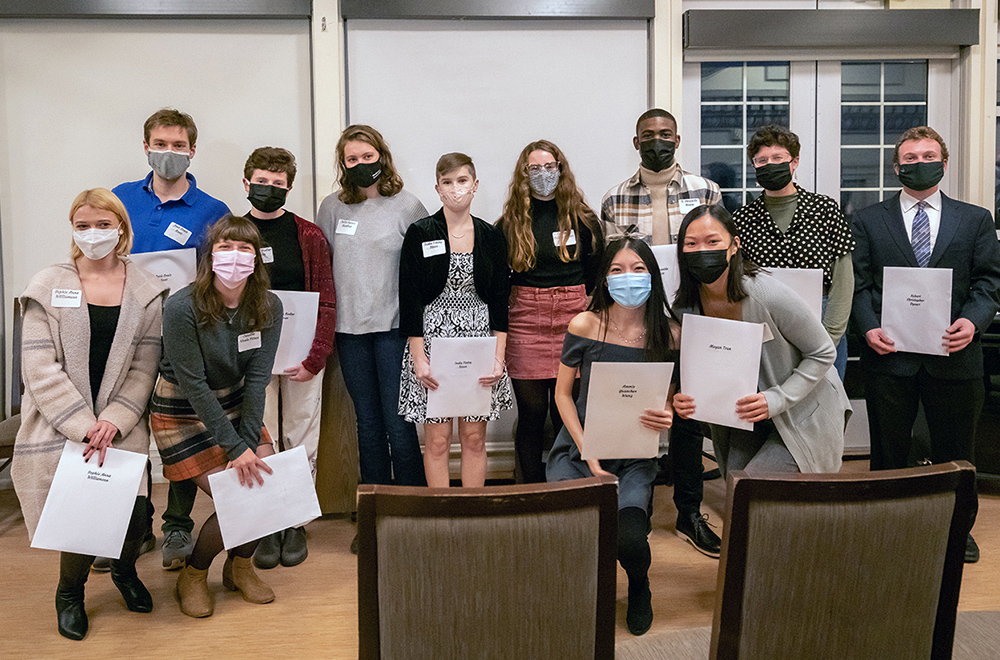 During their three-and-a-half-years at Wesleyan, Charlotte Babbin ’22 worked as a research assistant for a plant epigenetic lab, directed the pit orchestra for a Second Stage production, taught sex education workshops for area adolescents, served as a social programming and social justice co-chair for Wesleyan’s Jewish community, worked on a research project with a local domestic violence service center, and served as an eco facilitator for the Sustainability Office—all while pursuing a double-major in biology and science in society.

And, they managed to do it all while maintaining a 96.8 Wesleyan grade point value.

For these reasons, Babbin, who hails from Guilford, Conn., is one 15 seniors elected to Wesleyan’s Gamma Chapter of Phi Beta Kappa scholastic honor society for Fall 2021. To be elected, a student must first have been nominated by the department of his or her major, achieved a grade point value of 93 or above, and has demonstrated curricular breadth by having met the General Education Expectations.

“For students elected in the fall, it is an especially exacting selection process because admittance is based on a student’s performance at Wesleyan only through their junior year,” said Daniel Smyth, PBK Chapter President and assistant professor of letters. “These new members’ accomplishments during their years at Wesleyan should be a source of pride for themselves and to their families.”

Root and his twin brother, Russell Root ’22, both came to Wesleyan from the small town of San Anselmo, Calif. For the past two years, Jack Root has been working with Sher to study the behavior of electrons in solar cell materials. Ultimately, he hopes to pursue a graduate degree and find a career where he can further his passion for lab-based research. When he isn’t in the classroom, Root enjoys playing guitar in his band, hosting a college radio show, and skiing for the Wesleyan Ski Team.

Dixon, of Berwyn, Pa. has been busy working on her senior essay for FGSS, where she is researching the portrayal of queer-coded villains (for example Scar from the Lion King) in the live-action remakes of Disney films. Dixon has interned as a product manager at Elsevier and as a junior project manager at The 2.0 Collective, and currently works as a project coordinator for Wesleyan’s Office of Communications, which has helped inspire her ideal career in project management. Outside the classroom, Dixon has stage-managed multiple theater productions through Second Stage and is a member of Wesleyan’s fire spinning club, Prometheus.

During the ceremony, each initiate was asked to take a pledge, affirming to be true and faithful to the ideals of the society and to have supreme regard for moral character and scholarly attainment. They also received a new member packet containing information about acquiring a gold key emblazed with the three greek letters Phi-Beta-Kappa and a hand pointing to three stars that symbolize the principles of friendship, morality, and learning.

“In wearing this emblem, you should be mindful of the sentiments it represents, of the distinction that has been attached to it by the generations of those who have worn it, and of your individual obligation to support the ideals of the Society in the present and in the future,” Smyth said.