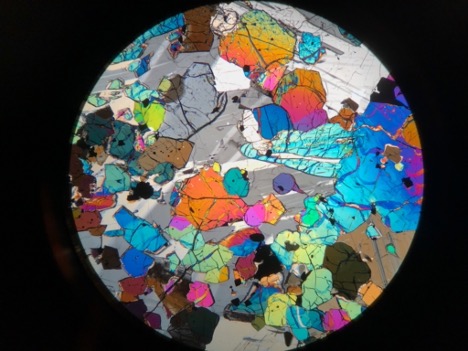 In the Lunar lab on the third floor of the Exley Science Center, Thomas Davoren MA ’22, thumbed through scientist David Walker’s handwritten notes from 1970, and inspected samples retrieved from the moon in 1969. Found in Davoren’s work are clues to the origins of Earth’s glowing satellite.

Davoren was among the students awarded a Fall 2021 NASA Connecticut Space Consortium Fellowship. In a paper written for a conference in 2020 in Houston, Davoren detailed his discovery of Chromite-Ulvöspinel-Pyroxene (CUSP) inclusions. These unique, microscopic crystalline structures appeared first to Davoren in basaltic rocks retrieved from the Apollo 12 mission. In Wesleyan’s collection of 18 rocks from this same mission, fifteen had these details. Davoren first noticed these “freckles,” as he called them, when he was a sophomore in E&ES Professor Jim Greenwood’s lab.

Davoren didn’t realize that someone had noticed these “freckles” first. In 1970, one year after the Apollo 12 mission returned, Walker, currently Emeritus Professor of Earth & Environmental Science at Columbia, studied the same type of inclusions while doing postgraduate work at Harvard. He noted the highly reflective nature of what he called “semiradial rosettes,” and postulated about the thermal history of lunar magma. Walker also experimented with artificially creating the thermal conditions under which these inclusions formed. Ultimately, limited by technology, he had to retire his work on moon rocks.

Until Davoren met Walker this fall at Columbia’s Lamont Doherty Earth Observatory, he didn’t know this experimental data existed. His own plan for future research, at the time, was to artificially form inclusions and track their growth himself. Instead, he returned from New York City to Wesleyan with samples and binders full of Walker’s work, hand drawn graphs and polaroids taped to pages filled with tables of data.

The pages had collected dust for half a century until Walker handed them over to Davoren. He trusted him – and Davoren’s mother who helped to decipher the cursive writing – to continue his inquiry into lunar magma. Using Walker’s data on cooling rates, Davoren is now focused on creating elemental maps with Yale’s electron microprobe to trace the routes that chromium forms through the rocks.

Davoren keeps a log for when ideas come to him at inconvenient times. One night his sleep was hindered by the note-to-self: “Figure out how the f*** symplectites form.” A symplectite is an intergrowth of two or more crystals. His mom, an artist, once described to him that when she fires her clay, if it heats too fast air bubbles will form. Bubbles, like the inclusions. The clay oven, like lunar magma. He often presents his dilemma to people who aren’t familiar with geology and asks what their theory is. So far, he’s collected many ideas.

Among this multitude of possibilities for the origin of the moon and its rocks – and ultimately the earth and its rocks – Davoren is sure about one thing: “12035, that’s my favorite.” He was talking about one of the rock samples. According to Walker, it formed eleven meters below the surface of the moon. When cross-polarized light shines up through it under his microscope, the sample becomes a mosaic of color. Parts look like a puddle in a city gutter, with gasoline floating on its top. Davoren keeps a pin that his mom made for him with this mosaic.

Other student honorees include:

“This map and NIR analyses of relevant weathered minerals generated in the lab will help with preparation for the mission data.” Deahn said.

This research supports the NASA Science Mission Directorate goal of studying the origin and history of the solar system, and the potential for life elsewhere, by supporting a mission designed to study some of Venus’s oldest terrains.

Olivia Drake contributed to this story.