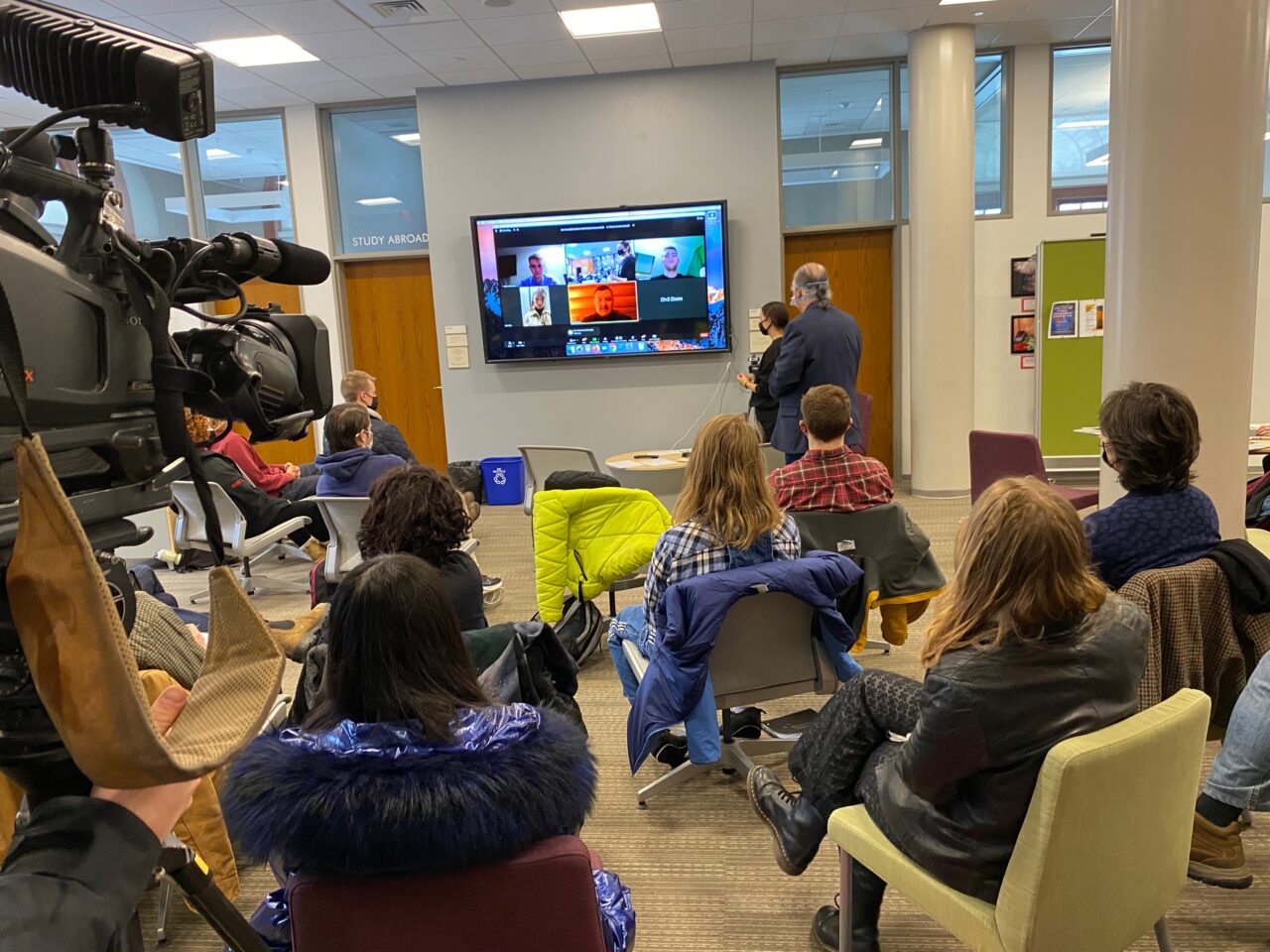 The panelists at Friday’s talk at Fisk Hall about the war in Ukraine were in so many ways just regular college students, studying public administration or politics, seeking ways to improve their communities and live their lives.

Given recent events, no matter how much they yearn for peace, they may all end up being soldiers. “The people who are defending us are putting up a hell of a fight,” said Daria Bila, a college student speaking from Ukraine.

The students joined a discussion via Zoom hosted by the Fries Center for Global Studies called “Ukraine-Russia Crisis: A Series of International Livestream Conversations with Students, Journalists & Civic Leaders in Ukraine.” The series started Feb. 25 in front of a rapt audience of about 40 Wesleyan students, faculty, and local journalists. News reports released during the meeting noted that Russian forces were attacking the capital of Kyiv in an effort to topple the democratically-elected government.

“We want to bring some humanity to what is going on in Ukraine,” said Katja Kolcio, professor of dance, director of the Allbritton Center, and one of the event organizers.

Kolcio hoped that by bringing in students with first-hand experience of the recent Russian attack, it would combat some of the misinformation being spread by Russian President Vladimir Putin. “We will get to see (the Ukrainian students’) perseverance, the determination, and their incredible care and commitment to civil liberties and democracy,” Kolcio said.

Several common threads emerged in the students’ statements—that Ukrainian forces are holding on thus far and that the people are united in their efforts to support the military. They said that Russian forces are attacking civilian infrastructure, including hospitals and schools. Ukraine is capable and willing to defend its sovereignty, but needs certain kinds of assistance from the United States and other democracies.

“We don’t understand why we aren’t in NATO (North Atlantic Treaty Organization)?” said Yuriv Lemikowskyy. “I don’t think they understand that war in Ukraine is a war against all of the democratic countries. Putin will never stop.”

Oleksii Diatiov, a QA engineer in the state company Prozorro, Kiev, currently studying at the master’s program at the School of Public Management in Ukrainian Catholic University, was forced to move his family from Kyiv because of the fighting. Diatiov is an officer in the Ukrainian reserves and had seen combat on behalf of his country in the Russian-Ukrainian War. “Dictatorships and autocracies only stop when they are stopped,” he said. “If we fall, the consequences will be horrible.”

Melaniya Podolyak, a civic activist and communications expert, currently studying at the master’s program at the School of Public Management in Ukrainian Catholic University, raised the equivalent of almost $10,000 from ordinary Ukrainians in about 15 minutes online this morning to provide needed supplies for their military efforts, including helmets, for example. She is organizing a convoy of war materials through the border. In the face of one of the world’s most formidable armed forces, she believes Ukraine needs all the help it can get, including weapons, strong sanctions, and help controlling its airspace. In her mind, the solution to the problem is a simple one. “All the Russians understand is pain and death,” Podolyak said.

Barry Chernoff, Robert Schumann Professor and Chair of Environmental Studies and moderator of the event, asked the group a simple question: “If President Biden were standing in front of you right now, what would you ask him?” Chernoff said.

“We are looking for support from the United States and the West,” said student Roman Stasiuk. “We are glad you are with us.”

President Michael Roth ’78 weighed in on the situation in Ukraine on his blog over the weekend. “Ukrainians are facing a dire emergency with courage and determination. People who care about democracy and peace should stand with them. We must not accept the vicious Russian aggression as a normal part of geopolitics,” Roth said.

Other Wesleyan faculty and students have recently appeared in the media discussing the crisis in Ukraine.

The series is sponsored by the College of the Environment, the Allbritton Center for the Study of Public Life, the Fries Center for Global Studies, and the Russian, East European, and Eurasian Studies Program.

next“You Just Have to Read This…” Books by Wesleyan Authors Jackson ’90, Carter ’88