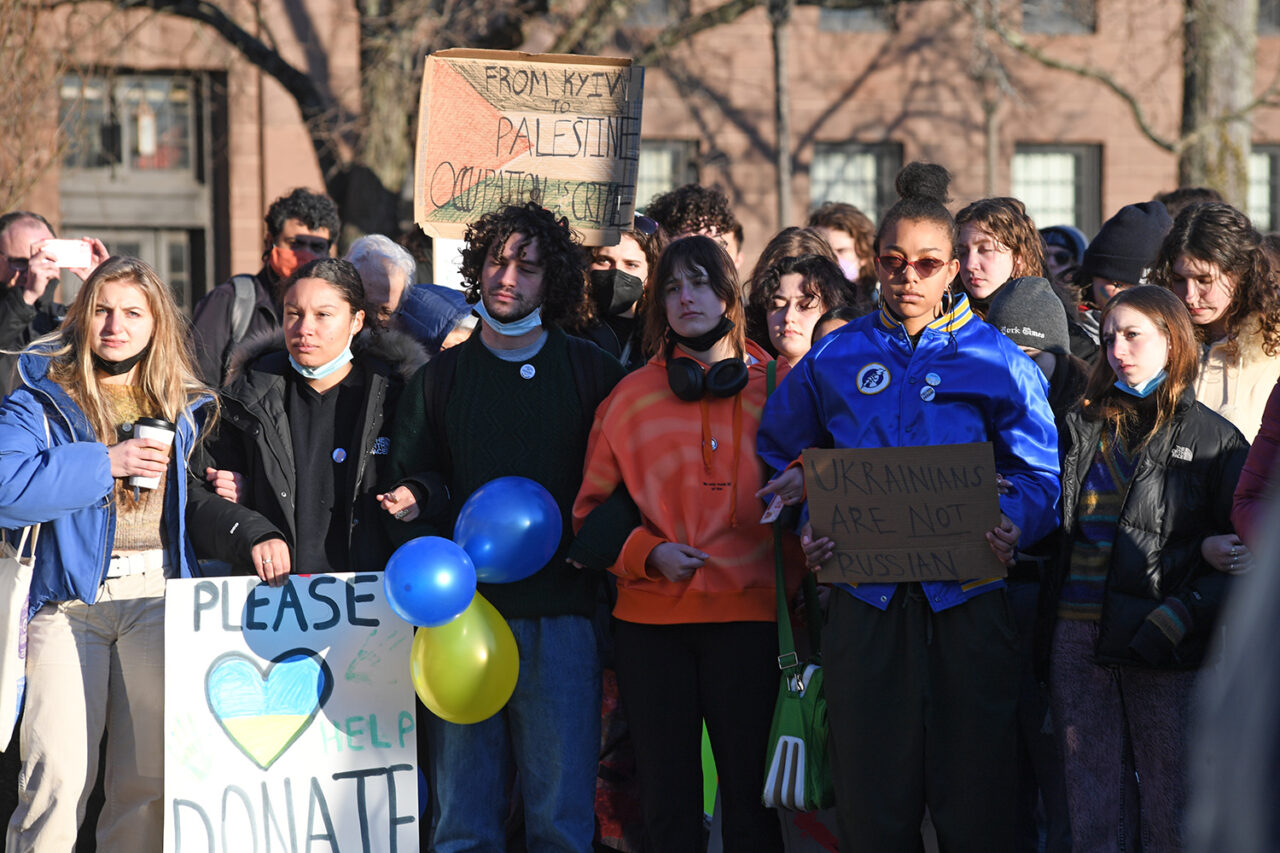 Silence fell upon the crowd of students and staff assembled outside Usdan University Center as Ukrainian native Julia Kulchytska ’24 stepped up to the microphone.

“The new norm is to live in a constant state of fear that I’m going to wake up and I’m going to get a message that my home was bombed,” Kulchytska said during a rally held March 4. She expressed feeling a deep sense of guilt that she is not in Ukraine with her family and described how numb and afraid she has been feeling since the war began.

Kulchytska organized the Ukraine Rally for Solidarity alongside Lera Svirydzenka ’25 and Kiryl Beliauski ’23 in solidarity with the country currently being besieged by Russia.

Beliauski, a student from Belarus, talked about how dangerous Russian propaganda is for the people living under Putin’s regime.

“There are no true news outlets left in Russia,” Beliauski said. He also elaborated on how difficult it has been to be away from his home country during the conflict.

“I’m so far away and I feel so helpless,” Beliauski added. “I left Belarus in 2016. I was protesting there before I left.”

Beliauski spoke between tears, at one point he had to turn away from his audience. “Hello everyone, it’s just that I am not emotional usually,” he said, “but when I see so many people come and support, thank you so much.”

Svirydzenka, too, protested in her home country of Belarus before leaving for the U.S. She told the crowd about her experiences protesting and emphasized that a country’s government is not necessarily the same as the people living in the country.

“I want to apologize for my government and the government of Russia for doing this, for this war,” Svirydzenka said. “But I also want you to know that not all Russians support Putin and not all Bellarusians support Lukashenko.”

Associate Professor of Dance and Director of the Albritton Center for the Study of Public Life Katja Kolcio spoke about what people can do to show support.

“One thing you can do is simply speak up, because you can,” said Kolcio, whose parents came from Ukraine. “Show up, because you’re free to do so without getting beaten. Write to your congressional representatives because they listen and they welcome your words. Organize because it’s not illegal. This is what Ukrainians are fighting for and giving their lives up for. Whether you stand for Ukraine or you stand for the principles that are dearest to your heart, just stand because you matter.”

Connecticut Senator Richard Blumenthal, who was invited by the rally coordinators to speak at the event, reiterated the strength of the Ukrainian people. He traveled to Ukraine merely six weeks ago.

“[Putin] can take the cities but he can’t hold the people,” Blumenthal emphasized.

During the rally, attendees donated over $3,000 through Venmo to provide support for humanitarian aid organizations helping Ukrainians.

“We’re part of a circle,” Teva said. “What happens in Ukraine affects us. We’ve come here today to stand with, to stand for, Ukrainians and Ukraine.”

Read more about the rally in this Middletown Press article (written by Hannah Docter-Loeb ’22).

Maia Dawson ’24 contributed to this article. Photos of the rally are below: (Photos by Sterling Rodas ’23 and Willow Saxon ’24)