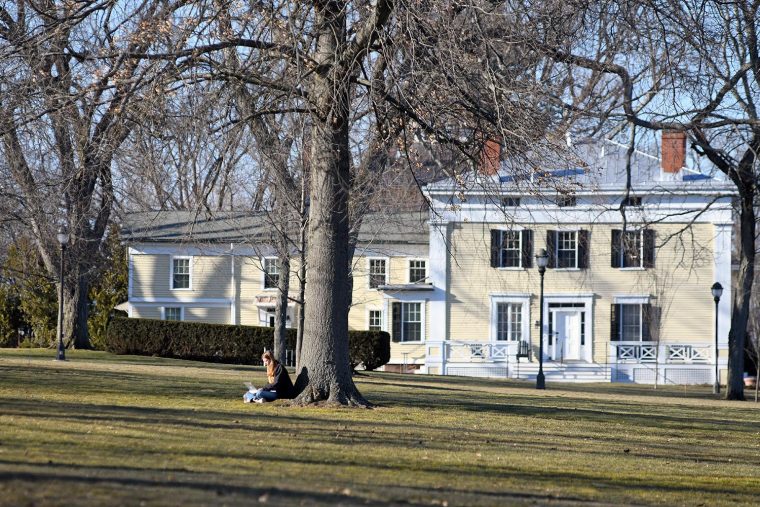 In The Washington Post, Wesleyan President Michael Roth ’78 reviews Colette Brooks’ new book Trapped in the Present Tense: Meditations on American Memory. “Brooks is drawn to what she has called ‘American darkness’ and the seemingly bottomless capacity of our country to forget its horrific relationship with violence,” he writes. (March 4)

Peter Rutland, professor of government and the Colin and Nancy Campbell Chair for Global Issues and Democratic Thought, shares an op-ed titled “Putin’s Claims Distort the Meaning of World War II; His War may Repeat its Destructiveness” for History News Network. “This month’s assault on Ukraine means a return to the politics of fear which dominated Europe in the 20 century: fear of the death and destruction of war; fear of repression under foreign occupation; and fear of nuclear Armageddon,” he writes. (March 6)

Ksenia Guliaeva ’25 of St. Petersburg, Russia speaks on NPR’s “On Point” about the economic sanctions to do the lives of ordinary people. (March 8). “The parents of my friends have their money frozen, and they simply cannot use it. And also, they don’t know how to pay for their study abroad … our parents can’t transfer money to us. Of course, they worry about it, because we can’t afford this by ourselves.” (March 8)

In Politico, Victoria Smolkin, associate professor of history, explained how Russian soldiers may be feeling confusion and ambivalence, especially in their encounters with Ukrainian civilians. “A key factor in understanding how Ukraine is still standing, then, is military morale, and especially the morale of the Russian army. Do they understand what they are fighting for? How long will they be willing to follow orders?,” she wrote. (March 3)

According to Art Daily, David Redden ’70, P’12 is the longest-serving auctioneer at the venerable auction house Sotheby’s. He shared his paper collection with the Getty Research Institute, which documents Redden’s entire career in the auction world.

The Middletown Press reports that Wesleyan is hosting a three-part series on the Ukraine-Russia Crisis. The series started Feb. 25 in front of a rapt audience of about 40 Wesleyan students, faculty, and local journalists. News reports released during the meeting noted that Russian forces were attacking the capital of Kyiv in an effort to topple the democratically-elected government. (March 10)

Justin Peck, assistant professor of government, co-authors an op-ed in the Washington Post titled “Congress finally passed a federal anti-lynching bill — after 120 years of failure.” “The century-long effort to pass federal anti-lynching legislation highlights the power the Senate affords intense legislative minorities.,” he writes. “Anti-lynching advocates have been battling to enact a federal law for more than 100 years.” (March 9)

In The New York Times, Amy Bloom, Shapiro-Silverberg Professor of Creative Writing, shares the story of her marriage, her husband’s Alzheimer’s diagnosis, his decision to end his life and her new memoir titled In Love. “It was very clear to me that I was not going to write this as a novel,” Bloom said. “I did not want to shape the narrative in a novel way. I wanted to tell the truth as best I could. Tell it straight.” (Feb. 27)

Gary Yohe, professor emeritus of economics and environmental studies speaks on the rising price of gas to Politifact. “Fossil fuel prices are dictated by international markets,” he said. “Fiddling with our supplies a little will not help lower prices here or abroad.” (March 10)

Syracuse University reports that a new mathematics scholarship will honor the legacy of Philip Throop Church ’53. Church taught mathematics for 43 years at Syracuse University, had a flair for the unconventional when it came to his workday. “To honor his career at Syracuse and dedication to students, Susan Andersson and her brothers, Peter T. Church and Daniel R. Church, have established the Philip Throop Church Undergraduate Math Endowed Scholarship fund through the Forever Orange campaign. The scholarship provides financial assistance to one undergraduate student majoring in mathematics each year.” (March 9)

Literary Hub shares an interview between Roxanne Coady and Amy Bloom based off Coady’s podcast, “Just the Right Book.” “If you were in a situation or a loved one was in a situation where you no longer knew what the keys were, you would have had the demented disease for probably for five or six or seven years to get to that point and long before you would reach that point, you would have struggled with language, with nuance, with abstract thinking, with balance, et cetera.” (March 10)

Bloom also shares the story with People Magazine. “His death—’I could feel him passing. It was peaceful,”‘ she says—was ‘100 percent how he wanted it.’ On the flight home, she wore his wedding band on her forefinger.” (March 2)

The Conversation celebrates Women’s History Month by highlighting five groundbreaking researchers. Among them is geologist and oceanographer Marie Tharp. “As late as the 1950s, wrote Conversation author and Harold T. Stearns Professor of Earth Science Suzanne OConnell, “many scientists assumed the seabed was featureless.” (March 4)

According to an article in the Forward, Mark Slobin, Winslow-Kaplan Professor of Music, Emeritus, will speak about the new documentary “Song Searcher” that is currently streaming. The film focuses on Moyshe Beregovsky who traveled across Ukraine with a phonograph in hand, seeking to record the authentic Yiddish music of Ukrainian Jewry. (March 1)

Andrew Curran, William Armstrong Professor of the Humanities, co-authored an op-ed with Henry Louis Gates, Jr., on the subject of the “language of race” for The New York Times. (March 3)

Netflix announces that Paul William Davies ’91 will be the showrunner/executive producer for Shondaland’s The Residence, a thrilling murder-mystery drama. “The Residence is a screwball whodunnit set in the upstairs, downstairs, and backstairs of the White House, among the eclectic staff of the world’s most famous mansion.” (March 8)

The Patch reports that the South Suburban College Art & Design Department presents an exhibition of work by artist Lily Homer ’17 titled “It will be in the end these details.” Homer is a multi-media artist exploring issues of disillusionment, contradiction, Jewish diaspora, and absurdity. (March 7)

Broadway World reports that a new work by groundbreaking composer and trumpeter Wadada Leo Smith, who studied ethnomusicology at Wesleyan in 1975-76 will be premiered on March 8. “Trumpeter, multi-instrumentalist, and composer Wadada Leo Smith is one of the most boldly original and influential artists of his time. Transcending the bounds of genre or idiom, he distinctly defines his music, tirelessly inventive in both sound and approach, as ‘creative music.'” (March 1)

The Hartford Business Journal reports that Wesleyan paid $3.1 million for a 44,000-square-foot office building on High Street near campus.

Dr. Scott Gottlieb ’94, Hon. ‘21 will be inducted to the East Brunswick High School Alumni Hall of Fame according to Central Jersey. (March 3)

Jesse Torgerson, assistant professor of letters at Wesleyan, speaks to My Record Journal about the City of Meriden, Conn. (March 8)

nextWesleyan Rallies in Solidarity with Ukraine