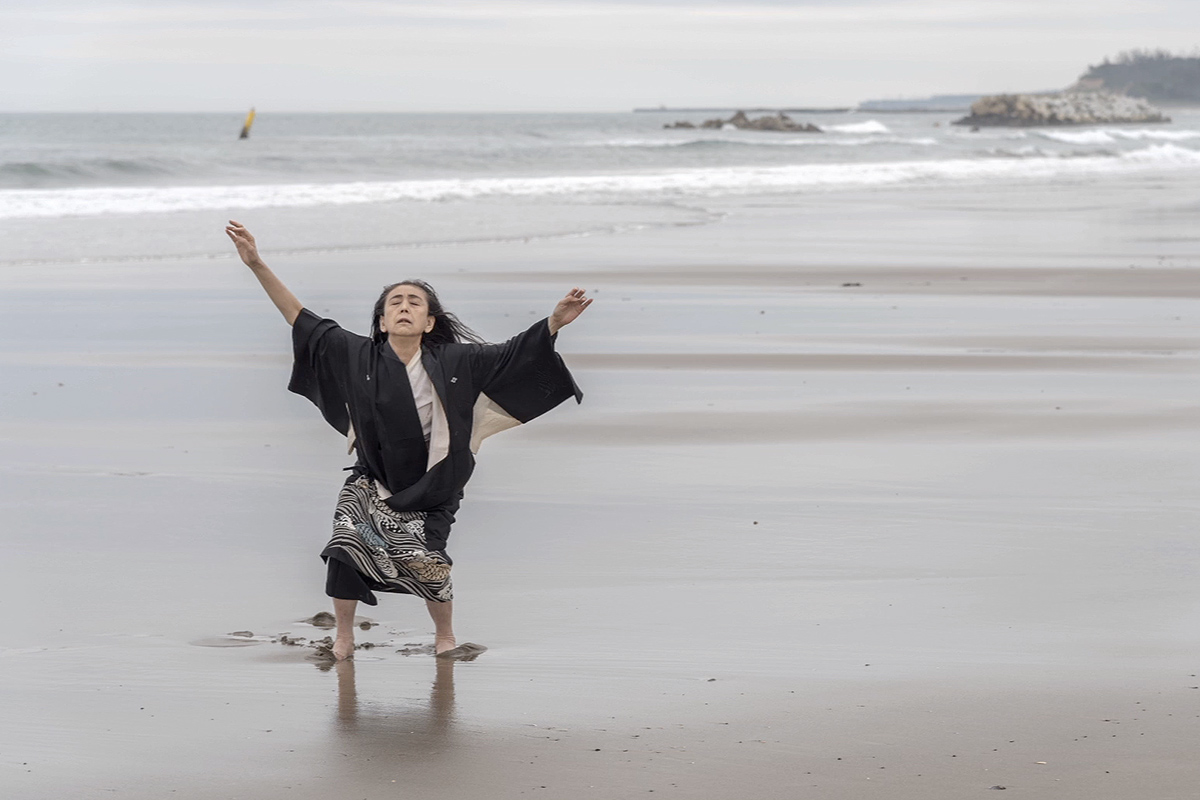 Eleven years ago, an earthquake and subsequent tsunami battered the Daiichi Nuclear Power Plant in Fukushima, Japan, resulting in radioactive material spewing into the air, ground, and ocean. About 16,000 residents were killed from the explosions, and another 165,000 were forced to evacuate.

“I should not be here,” Eiko Otake shares in her most recent film, A Body in Fukushima (2021). But she keeps returning—for a total of five visits to the nuclear disaster site.

Otake, visiting dance artist-in-residence, began her solo work there in January 2014. Her only audience is William Johnston, John E. Andrus Professor of History, who captures her poetic performances through the camera.

A Body in Fukushima, which made its world premiere March 8, 2022 at the Museum of Modern Art’s Doc Fortnight Festival is culled from tens of thousands of Johnston’s photographs. Directed and performed by Otake, the new, 114-minute film features music performed by David Harrington of Kronos Quartet.

Otake’s introduction speech is online here. Otake and Johnston participated in a Q&A following the screening.

“My body will carry a piece of Fukushima,” Otake writes in her artists’ statement. “I hope the [viewer’s] sense of their own distance to Fukushima might also change.”

The film also selected by the Hong Kong International Movement-image Festival. The screening will be in September 2022.

A Body in Fukushima is part of Otake’s solo project titled A Body in Places. Starting with “A Body in a Station” at Philadephia’s 30th Street Station in 2014, the series has continued at more than 70 locations worldwide, including “A Body in an Observatory” at Wesleyan’s Van Vleck Observatory.

A Body in Places incorporates both performative and non-performative elements, including photo exhibitions, video installations, and film screenings. While in “a place,” Otake navigates the space—which could be a broken seawall to a crowded sidewalk—with expressive movements. The random obstacles and people she encounters while moving influence, rather than interrupt, her dance.

Many of the images in the film also appear in Otake and Johnston’s book with the same name. A Body In Fukushima (2021) showcases a curated photographic account of Otake’s ongoing performance in Fukushima and insightful essays.

In addition, Otake is prepping for the New York premier of The Duet Project: The Distance is Malleable at the NYU Skirball Theater. In this piece, she collaborates with DonChristian Jones ’12, and Iris McCloughan ’10, and shares a film made in collaboration by Alexi Moh ’15. By using promo code DUET20, the Wesleyan community can see the show for only $20.