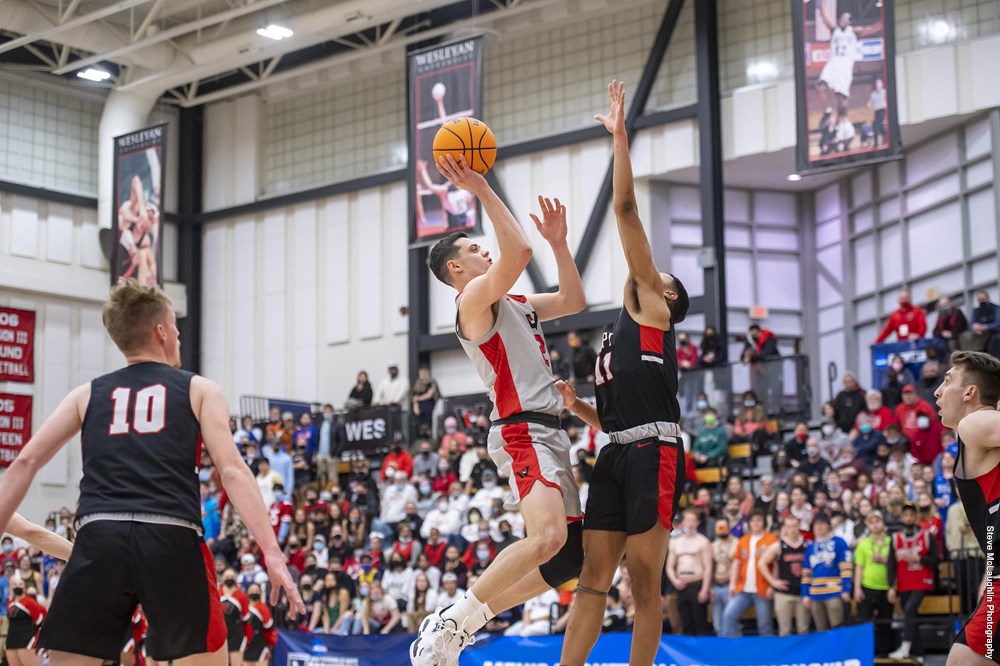 Silloway Gymnasium was pretty dead in the early days of the pandemic. The men’s basketball team had cancelled its season. Because of social distancing requirements, even playing one-on-one was prohibited.

For the few players remaining on campus, there was nothing but drills. Lots and lots of drills. In those mundane practice sessions, the seeds were planted for a NESCAC championship. “We were practicing a new offense this year. We wanted to really get out and push the ball and just be faster than teams offensively and defensively,” said Sam Peek ‘22.

And, just maybe, all that time in the gym helped Peek become an All-American.

Peek, a 6’7” guard, led the 2021-22 Cardinals in scoring (17.9 PPG) and rebounding (7.0) while he shot 50.3 percent from the floor. He ranked Top 20 in the NESCAC in scoring, rebounding, field goal percentage, assists and steals while his 17.9 PPG was fourth-best in the league. “He played at an extremely high level. Not only did he lead the team in scoring and rebounding, but he’s an excellent defender and a great teammate. He’s a complete player,” said Joe Reilly, the men’s basketball coach.

Reilly said Peek was a huge part of arguably the best team in the program’s history. The Cardinals finished 25-4, including a 9-1 record in NESCAC play and winning the tournament. They lost in the second round of the NCAA Division III Tournament by a single point, ending a magical season.

When your leading scorer spends the most time in the gym like Peek did, well, that’s a coach’s dream, Reilly said. “We had a team culture where winning is the number one priority, not pursuing personal gain … our locker room culture was great because of Sam,” Reilly said, describing him as a consistent and low-maintenance presence on the team. “He gives off a great energy.”

There’s a chance Wesleyan fans will get to see a bit more of Peek next year. Peek gained an extra year of eligibility because of the pandemic, so he is considering taking graduate classes at Wesleyan next year and playing another season. If he returns, he isn’t ruling out another run at the NESCAC Championship – and another Division III All-American honor. He has also garnered some interest from Division I schools in his final year of eligibility. “In terms of personal development, I just want to shoot for the stars,” Peek said.

Peek believes he can continue his basketball career at the professional level when he leaves Wesleyan, following in the footsteps of several players over the past decade who have achieved success playing in competitive leagues in Europe. “I envision playing basketball at the highest level I can. There’s also the traveling aspect. I have always wanted to travel, so I might play in other countries. I think that would be a good experience to have,” Peek said.

Peek has already had some preliminary conversations with scouts and trainers and Reilly can see that path for him as well. “There is no limit to how good Sam can be, in my mind,” Reilly said.