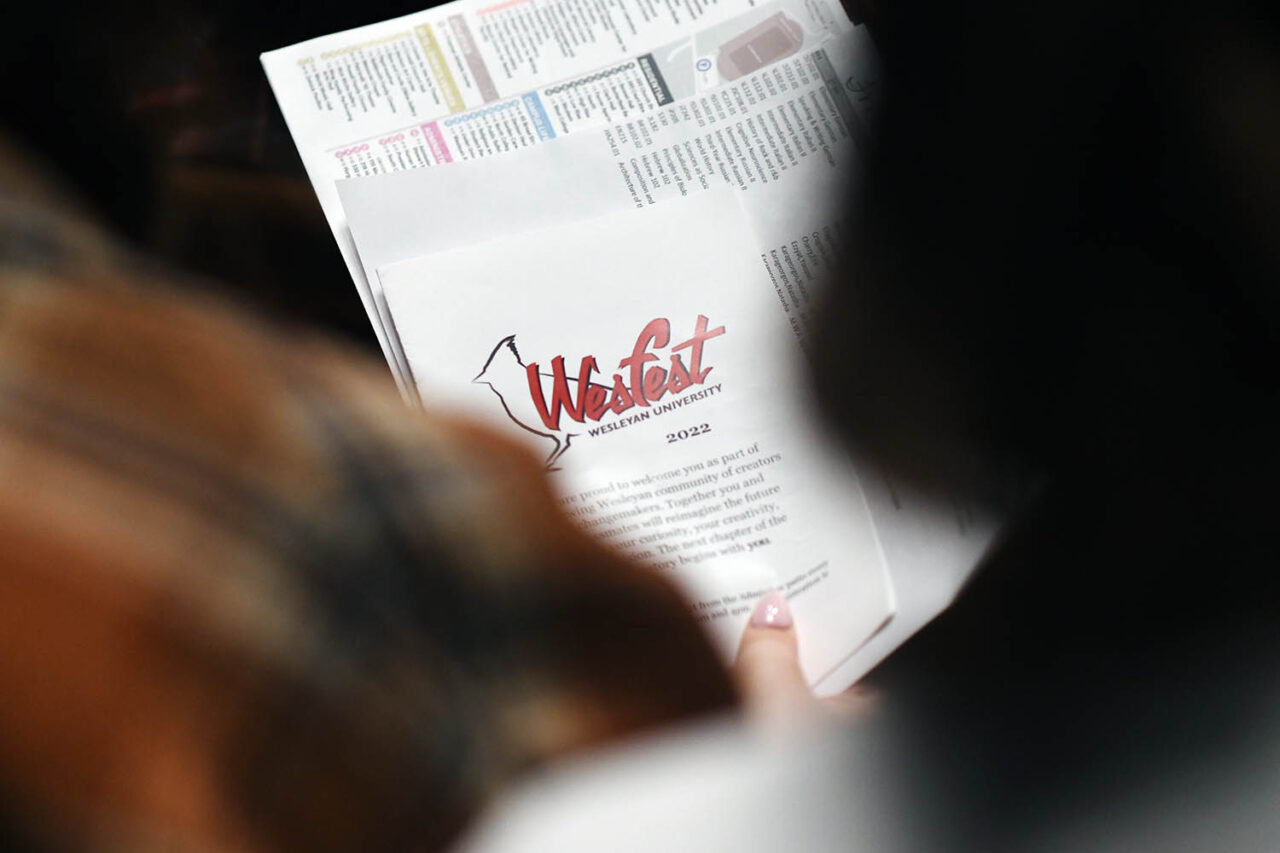 Krithi De Souza knew five years ago she wanted to apply to Wesleyan.

While in eighth grade, she toured several colleges with her sister, and Wesleyan was among them.

“I wasn’t really paying that much attention, but I do remember really liking the vibe of Wesleyan. We were having lunch in the dining hall and I was listening to the kids laugh and mingle, and I noticed how it was more diverse than the other schools. So Wesleyan stuck out to me and I knew I was going to apply here.”

De Souza, a senior at Berkley High School in Berkley, Calif., did apply and was accepted as a member of Wesleyan’s Class of 2026. On April 8, she joined 85 other admitted students on campus for the first of three WesFest gatherings. WesFest provides all admitted students and their guests to experience and explore the diverse opportunities that a Wesleyan education has to offer.

“This is a celebration of all things Wes,” said Amin Abdul-Malik Gonzalez ’96, dean of admission and financial aid in his welcome remarks. “It’s an opportunity to learn, explore, try on, and get the general vibe of campus as you continue to consider why you should say yes to Wes!”

More than 2,000 students have been offered admission to the Class of 2026 with the hopes that between 750 and 770 will choose Wesleyan as their academic home. “We are not here to teach you what to think, but rather how to think and how to translate important ideas into meaningful action,” Gonzalez said. “No single voice is going to encapsulate all that makes this place special.”

De Souza, who attended WesFest with her mother, Sanjani Varkey, also has her eyes on UCLA, but she is impressed with Wesleyan’s open curriculum and student groups — places where she “can find [her] people.” After attending the Student Activity Fair during WesFest, she’s already intrigued by the John Quincy Adams Society, the Latin Salsa Dancing Club, and the water polo club.

“I’m interested in law and international relations, and I’d love to take classes that further that, but I also want to take a bunch of different classes and figure it out,” she said. “I’m also bilingual, and I want to learn another language.”

Noah Haas ’26 attended WesFest with his parents, Stacey Bernstein-Haas and Matthew Haas, and his sister, Amelia Haas. Noah, who applied early decision to Wesleyan, chose the University because it was a perfect fit.

“I wanted to be at a liberal arts college, and I wanted to explore a lot of disciplines and things I’m interested in,” he said. “I’m not one-dimensional and Wesleyan caters to those types of people.”

Arroyo, who has an interest in science, math, and technology, applied to Wesleyan because she already has friends enrolled as students. “My friends really like their Wesleyan experience,” she said.

Ainhoa Murchan ’26 and her grandfather, Carlos, drove to Middletown from their home in Norwalk, Conn., just an hour away. Wesleyan “checks all my boxes,” Murchan said. “I really love the campus. It’s small, but it’s ‘big’ for a small school, and I also like how I can drive back home. I wanted to stay pretty close.”

President Roth ’78, who was a first-generation college student, recalled his first visit to Wesleyan: He was a teenager and was skipping school with a friend. He hadn’t heard of Wesleyan before. A whirlwind day spent immersed in the campus experience – chatting with professors, watching interesting young people debate ideas and make music convinced Roth that Wesleyan was where he wanted to be.

“I said, holy moly, I love this place,” Roth said. “I found [Wesleyan] was where I could realize my aspirations by interacting with smart, interesting people and where I could respond to the world that gave you opportunities and challenges. It seemed like I could do anything.”

Even if the admitted students who attended WesFest don’t ultimately choose to attend Wesleyan, President Roth advised that no matter where they go, it’s important to discover what you love to do, get better at it, and learn to translate your work and share it with others. It’s a message he also shared in his April 7 Roth on Wesleyan blog.

“Whatever you do, do it at the highest level. At Wesleyan, we expect you to go beyond what others may have defined as your limits. When you do so, you can find a lifetime of meaningful work that allows you to continue to learn, continue to improve at whatever it is you’ve come to care about,” he said.

In addition, admits and their families could attend mock classes on “Aristotle on the Good Life” and “What is Animism? Shamans, Environmentalists and Siberian Spirit Masters.”

Thai Buu-Hohn P’26 and her son, Marcus, attended the Shamans course during WesFest while her son, Lucas Buu-Hohn ’26 went to another panel. As a parent, Thai Buu-Hohn is thrilled that Lucas chose Wesleyan.

Lucas has an interest in film, and there’s a sense here that there’s a huge support for the arts, said Buu-Hohn, who hails from San Diego, Calif. “I love the idea of an open curriculum, and how all the kids are so intellectually curious.”

The next WesFest events are April 15 and April 22.

Additional photos of WesFest are below: (Photos by Olivia Drake)