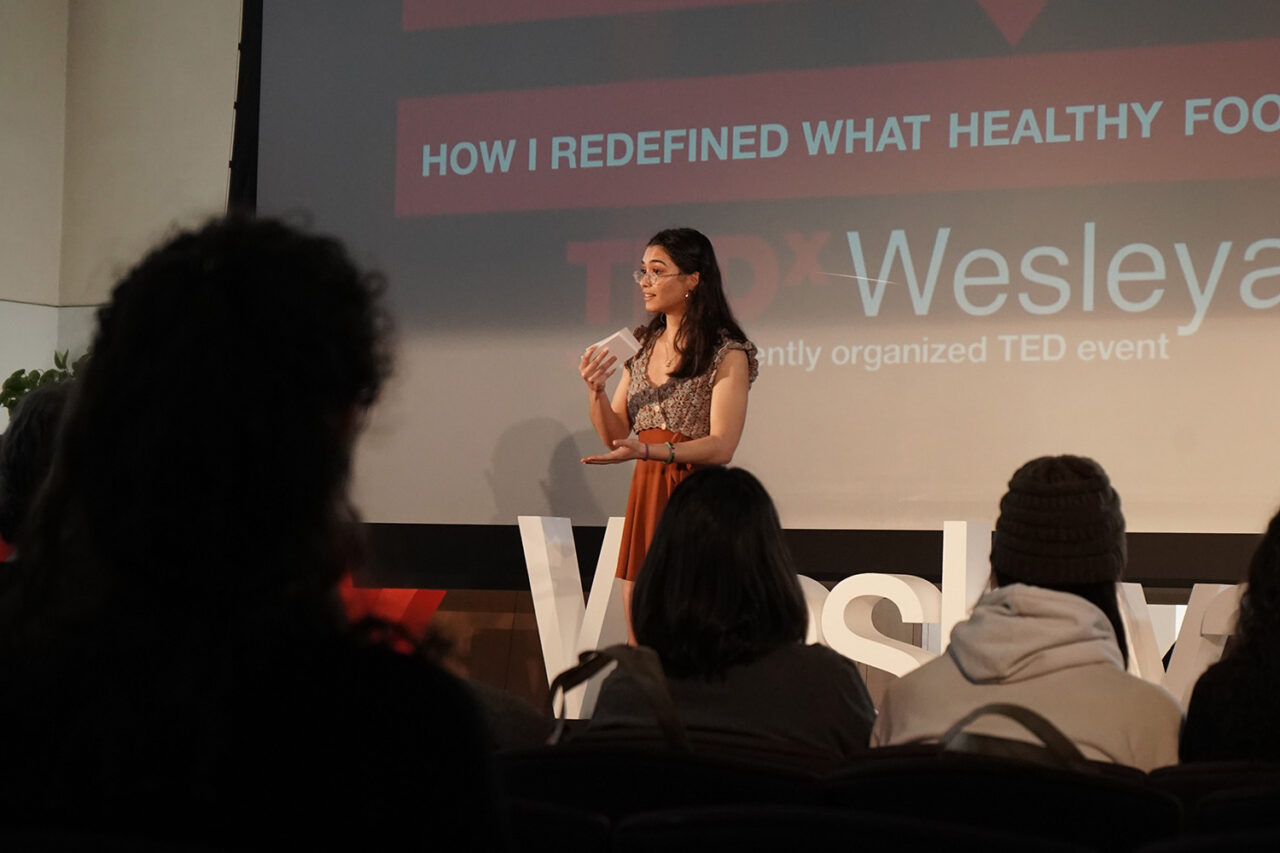 TEDxWesleyanU returned to campus April 23 with authors, entrepreneurs, and other accomplished professionals sharing stories of revivification and curiosity.

Organized by students and held in Beckham Hall, the TEDxWesleyanU gathering was the first live event since 2019. The brochure pictured a martini glass overflowing with a string of pearls, in line with the theme “Re-roaring Twenties.”

Ritu Chhawal ’88 and Raquel Graham ’90 spoke to the audience about resilience emerging from illness. Chhawal introduced her vegan startup as an effort to spur a food revolution, and Graham described her success on Shark Tank and finding her ‘why’ in her children. Kate Purdy ’01, showrunner for Undone, presented her pre-recorded montage of interviews with her colleagues on communication and leadership.

Alton Byers, a former distinguishe visiting scholar in the College of the Environment and mountain geographer, preceded the first intermission. He glanced at the projection behind his shoulder and then at the tech operator as he narrated an aerial video of an emptied glacier in Nepal. After hearing about a flood, Byers had flown a helicopter over the range which was a 10 day-long walk from the nearest road.

“Why were there house-sized icebergs thrown for hundreds and hundreds of meters?” Byers asked himself. “Why was everything covered in this white dust for square kilometers all around me?”

A yak herder who was travelling with him pointed out a mountain peak that had been bifurcated by gravity. “Because of changes in permafrost, a massive section of that mountain peak broke off, plummeted down, hit the glacier. That was the explosion that pulverized the rock that turned into the dust that covered everything that created hurricane force winds that cascaded into the lake that caused the flood,” Byers surmised. In the current, a hotel had been dislodged and carried away.

Beyond Nepal, author Brad Herzog P ’25 remembers asking himself in the baby food aisle of a grocery store, “Who is the Gerber baby?” After sorting through the rumors that it might have been Katharine Hepburn or Bob Dole, Herzog identified Anne Turner Cook who is a self-published mystery writer in Tampa, Fla. for a magazine story.

Herzog warned against the conventional rules of writing, like keeping distance from a story. For example, he once entered the masters Mini Golf tournament in Myrtle Beach, South Carolina for an airline magazine article.

His tenet of non-linear writing is another anti-rule. Herzog reminded the audience that the lyrics of Something by George Harrison were originally “Something in the way she moves attracts me like a cauliflower.” Harrison, at the time, had only figured out the beginning of the line so John Lennon recommended the placeholder.

Students performed between talks. Tyler Jenkins ’22 sung Georgia on my Mind, a Hoagy Carmichael ballad from 1930. A shadow of his head swayed near the bottom of the projector as he strummed his guitar and echoed “Georgia, Georgia, a song of you comes as sweet and clear as moonlight through the pines.” We do not know whether a vegetable was once a placeholder in that line.