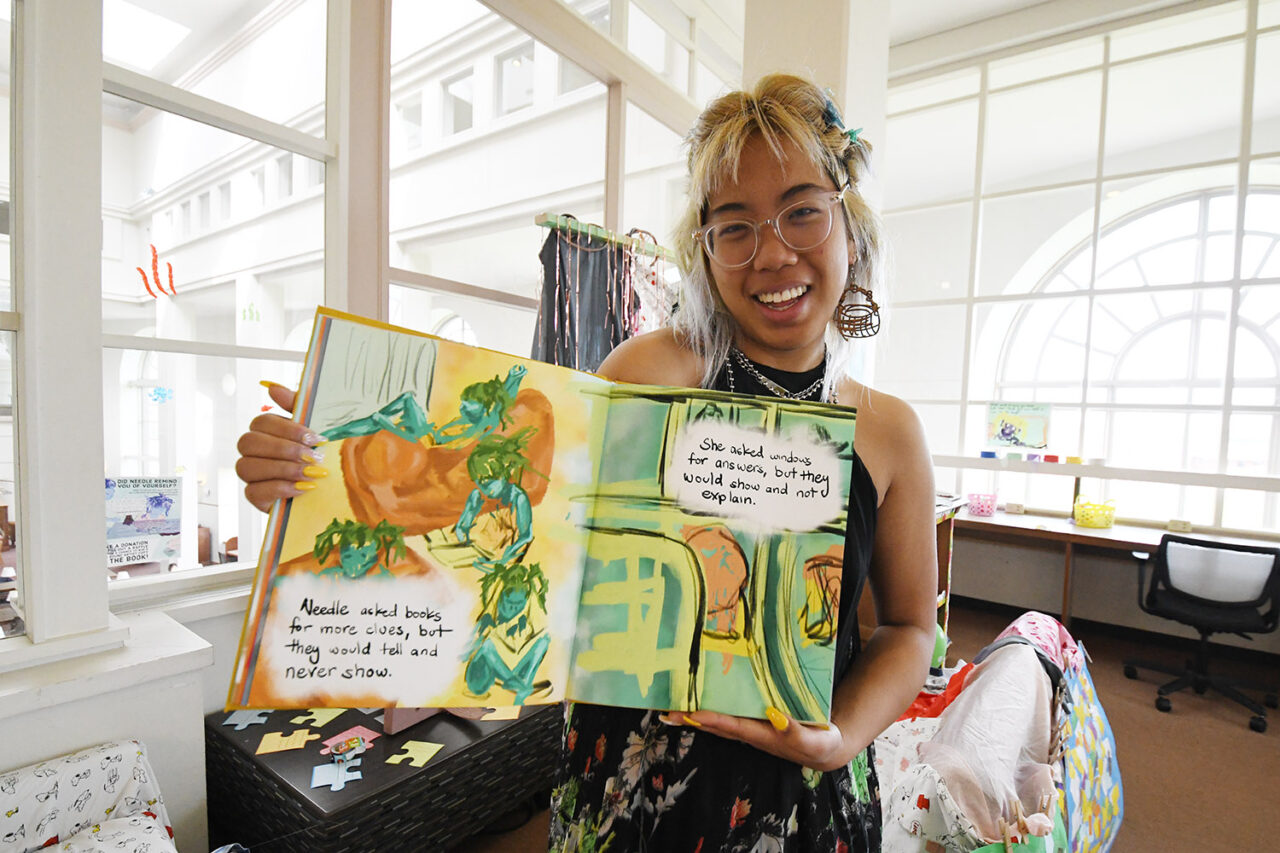 For “all 22 years of [her] life,” Elim Lee’s been writing a story, and it wasn’t until April 14— the deadline to submit a senior honors thesis—that her narrative finally was published.

Lee ’22, an English major who is minoring in IDEAS and data analysis, ended up completing an original children’s book as part of an art studio thesis called Needle and the Too Big World.

“I told my advisors that I wanted to write a children’s book and build it,” Lee said.

And Lee did just that. Inspired by a library exhibit in her hometown of Columbus, Georgia that commemorates works by Where the Wild Things Are author Maurice Sendak, Lee hoped to turn her own story into a “living book” inside Olin Library.

“I was so in love with the playground-esque, immersive experience of a book that comes to life,” Lee said. “I wanted to make my own characters, story, and places.”

The story itself, which is semi-autobiographical, is about a little girl named Needle who is overwhelmed by everything unknown in the world.

“The message that it’s OK to have emotions that are too big to handle, and that with creativity one can learn to find a way through them, is much needed,” explained one of Lee’s advisors, Adjunct Assistant Professor of Art Kate TenEyck.

Lee credits TenEyck and her other advisor,  Assistant Professor of Art Tammy Nguyen, for being supportive of her unconventional storytelling.

“Elim is a student with a tremendous passion for life. You can see it reflected in her colorful and energetic illustrations, and her desire to help others by drawing attention to children who process their emotions differently from what is expected,” Ten Eyck said.

Like Needle, Lee was a curious, but shy, awkward child. She grew up in Ohio and Georgia speaking Mandarin as her first language, however, she was comfortable reading and writing English as early as her pre-school days.”I didn’t talk to people until fourth grade,” she recalls. “I was the girl in the back of the class who read a lot of books. And I super loved to carry around books—big books.”

She was drawn to Jerry Spinelli’s Smiles to Go and Stargirl; Rebecca Stead’s When You Reach Me; C.S. Lewis’s The Chronicles of Narnia; Louis Sachar’s Magic Tree House series; and Madeleine L’Engle’s A Wrinkle in Time.

“While all of these books are for kids or young adults, the topics are not underestimating in their minds,” Like in Wrinkle in Time, kids understand time travel better than adults do, often because they haven’t learned all the rules of physics. How are you going to understand something that breaks those laws?”

While reading and writing always came naturally for Lee, it wasn’t until her first-year at Wesleyan that she considered trying out something new—drawing. This led her to enroll in additional art studio courses such as digital media and design, where she learned to use tools such as an iPad to sketch vivid images of people and places.

“I wanted to have the book, illustrations, and exhibit look like something that a child would imagine,” Lee said. “It doesn’t look like a boat in the scheme of a boat, but if I was a child and had to use whatever was laying around, I’d make something like a pillow fort—that’s where I was going with this idea.”

Once Needle and the Too Big World leaves Olin Library, Lee hopes the exhibit could be set up elsewhere at another local library or at Kid City Children’s Museum in Middletown. With COVID-19 restrictions lifting, she also hopes to read her book to children at area schools.

After graduating, Lee hopes to move “somewhere cheap” and work as a copywriter or web designer and sell original creative works online. Ultimately, she wants to become a product manager or creative director and start a company that sells children’s games and entertainment.

“I will be a graduate of Wesleyan, and Wesleyan’s liberal arts education. I may not be a jack of all trades, but I’ve been learning as much as I can about everything,” she said. “I may not be good at everything, but I know enough about a lot of things.”

Additional images of Lee’s exhibit are below:

nextTEDxWesleyanU Breaks its Covid Hiatus with Stories of Innovation and Creativity