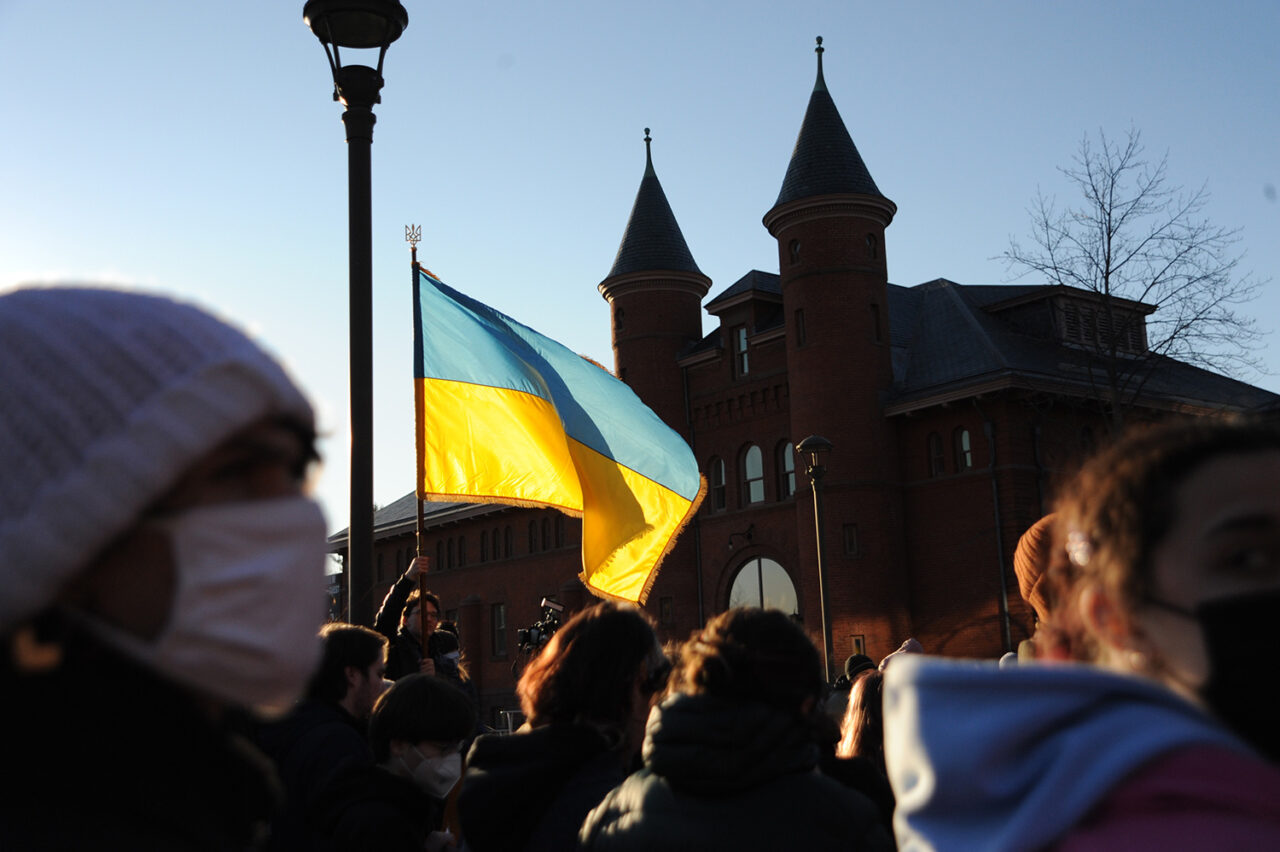 During a recent meditation, Katja Kolcio pondered the question, ‘What do you wish for the world?” Without much premeditated thought, Kolcio determined that she’d want all humans to have the kind of optimism and inner strength that Ukrainians have during the current war.

“Nobody would defend one’s rights with that kind of veracity without undaunted optimism and faith in our individual capacity to make a difference in the world. With everything horrible happening, there’s something that’s at a base level inspiring,” she said during Wesleyan’s sixth Livestream Conversation with Ukraine discussion on April 22. “I can’t thank you enough for being here—and hearing. It’s been over 100 years that the Ukrainians have not really been listened to, and so the paying attention is a momentous act in and of itself.”

Kolcio, associate professor of dance and director of the Allbritton Center, along with Barry Chernoff, director of the College of the Environment and Robert Schumann Professor of Environmental Studies, created the Livestream Conversation with Ukraine series in an effort to humanize the war in Ukraine by hearing perspectives from students, journalists, and civic leaders in or from the war zone, and at Wesleyan. Chernoff and Kolcio have developed working relationships with scholars and civic leaders in Ukraine since 2017 in environmental studies.

While the war in Ukraine continues—currently with heavy shelling and fighting in the Donbas region—Julia Kulchytska ‘24 says much of the focus right now is helping and supporting the needs of refugees.

Ukrainian children are being welcomed into Polish schools, while spaces like her former high school are being transformed into sleeping rooms. Several of her friends in Ukraine and Poland are taking on 24-hour shifts to voluntarily help displaced people find shelter.

“Some of my friends even have refugees at their homes. They will stay temporarily when they don’t have space to [put] them in,” Kulchytska said. “Of course it’s hard time for everybody, but people are united, and people do everything they can like to put resources into helping the refugees.”

Although the United States alone has already sent $3.4 billion dollars in aid to Ukraine since Russia launched its invasion Feb. 24, the Russian media continues to produce its own narrative, and suggests that Ukrainian Nazis are are bombing their own cities. “Or they’re saying this is a tragedy, and nobody wanted this war, but the Americans forced us to have this war,” said Peter Rutland, professor of government and the Colin and Nancy Campbell Chair for Global Issues and Democratic Thought. “For people who are living in regions that are only getting Russian media, they’re basically accepting what the media is telling them.”

No matter what sanctions are put on Russia, Rutland says the war will continue as foreign countries continue to purchase oil from Russia.

“Oil is their major source of income, so Russia can afford to continue fighting the war,” he said.

Rutland, however, feels that it is possible that more Russian citizens will eventually learn the truth of the current scenario.

“The initial position of the Russian media was hiding the invasion, and hiding the losses as well, but as word of these losses – military losses and other losses of lives – filters through to the public it is possible that anti-war sentiment in Russia could reassert itself.”

Kiryl Beliauski ’23 of Belarus spoke about the challenges young people face if they want to speak up against the war.

“If you speak out, especially in the schools, teachers just want you to follow their rules just to make their lives easier, because teachers are drastically underpaid and they also feel pressure from the school administration,” he said. “Belarusian schools constantly force teachers to participate in falsifying the elections by throwing in fake ballets, so if teachers do even that, they would try to suppress students to keep their job. So even those people who are trying to be activists, young people, they just get this constant pressure from the outside …. [Teachers] would call your parents. They will do anything to suppress trying to speak out. So I think it’s more just the fear—it’s not the fact that there’s way to speak out—it’s just how you’re gonna live after.”

“[Now] we have a lot of political support inside of Congress. But if [Trump] was in power, Putin would have had a very different relationship to the outcome,” Chernoff said.

Rutland mentioned that few scholars have attempted to analyze this idea, but he suggested it was Trump’s unstable mannerisms that possibly made them wait.

“I think that the Russians figured out pretty early that Trump was completely unpredictable, so I think that factored in as to why they didn’t trust Trump to deliver anything,” Rutland said. “Trump did use cruise missiles in Syria after chemical weapons — an event which President Obama did not do so. So that could be one factor.”

The conversation with civic leaders was the third and final part of the Ukraine-Russia Crisis: Livestream Conversations series hosted at the Fries Center for Global Studies. On March 4, students and journalists gave personal accounts of their experience with the war in Ukraine. And on Feb. 25, the campus community connected with college students in Ukraine. Recordings of the past events are available online.

Co-sponsors of the event included the College of the Environment, the Fries Center for Global Studies, the Allbritton Center, and the Russian, East European and Eurasian Studies Program.