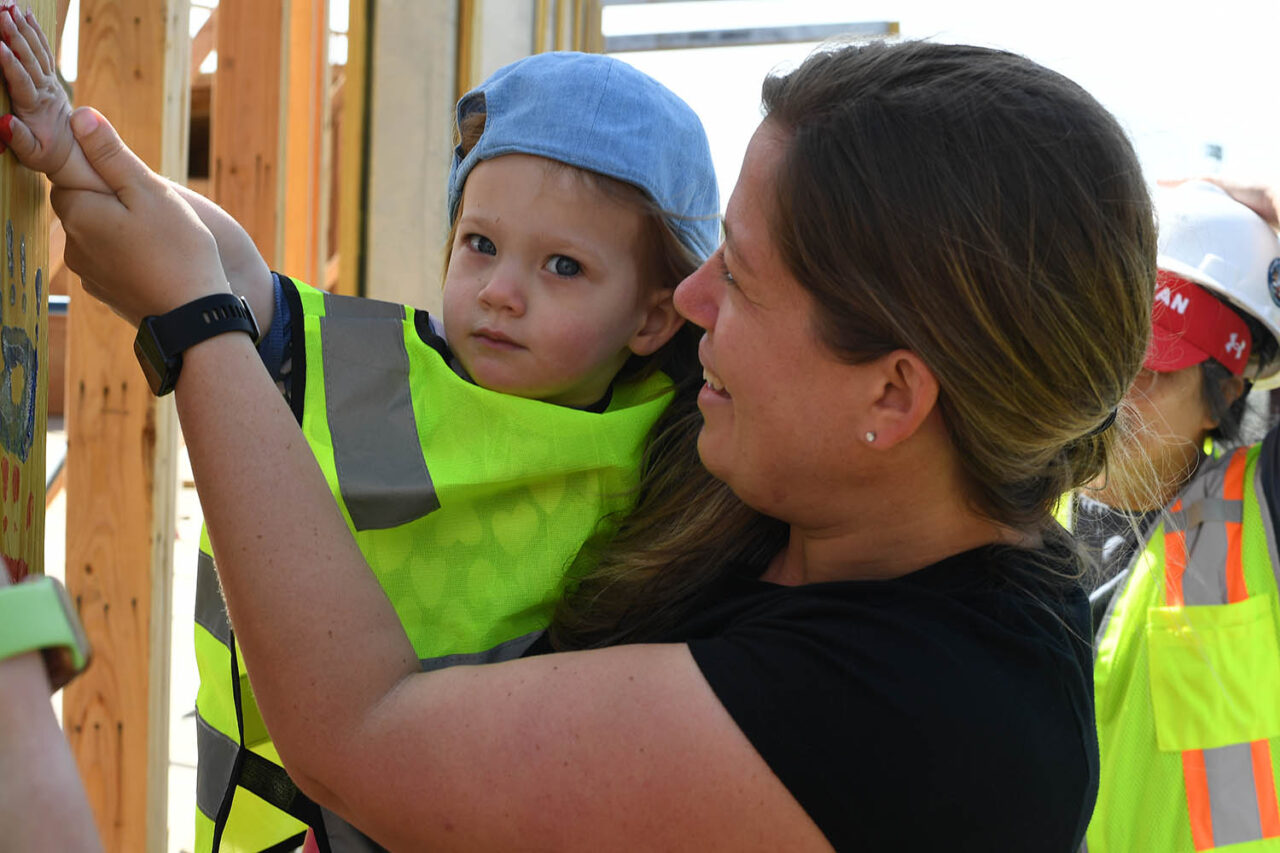 Children enrolled in Wesleyan’s Neighborhood Preschool (NPS) recently got a first glimpse at their new 7,000-square-foot daycare facility. The school is due to open next October at 60 Long Lane.

During an early morning field trip on May 23, the students, parents, teachers, and caregivers met with project managers. Each child was given a safety vest and hard hat to wear into the construction zone. After a quick snack, the children were escorted to the site where they placed painted handprints on the exterior of the building.

The new facility, which will accommodate 52 children, will replace the two current NPS buildings, which will be demolished to make way for the new life sciences building. Neighborhood Preschool has had a relationship with the University since 1989 and more than half of the current student population is affiliated with Wesleyan.

Jeff Murphy, facilities business manager, is chair of the Building Design Committee for the project, and is the Wesleyan representative for the NPS Board and chair of the NPS Projects Committee. He’s also the father of 5-year-old Sam, who has been a student at NPS since he was four months old. Sam’s older sister also attended NPS.

“The benefits of the new NPS building are numerous,” Murphy said. “Instead of having two distinct locations, the entire NPS program will be under one-roof. This creates enormous opportunities for collaboration and engagement between the preschool classrooms that isn’t able to happen today.”

Additionally, the extra space will allow for more infants and toddlers, which will help address the current extended waitlist issue that currently exists.

And since the new facility is a purpose-built daycare facility as opposed to a former house that was converted for use as a daycare, the new design will allow for better flow and use. It also will be significantly more energy-efficient, using less than half of the energy of the existing buildings, and is completely fossil-fuel free. Solar panels are integrated into the design of the building, which will actually generate more energy than the building uses annually.

“This gives us the opportunity to build this from the ground up, so we can ensure safe, healthy spaces for generations to come,” Murphy said.

Later this summer, the children will create a time capsule to place inside the new building.

Photos of the field trip are below: (Photos by Olivia Drake) previousWesleyan Celebrates the Class of 2022 at the 190th Commencement

next“How Societies Choose to Confront Disease:” Tan and Murray on “Strong Bodies for the Revolution” Exhibition