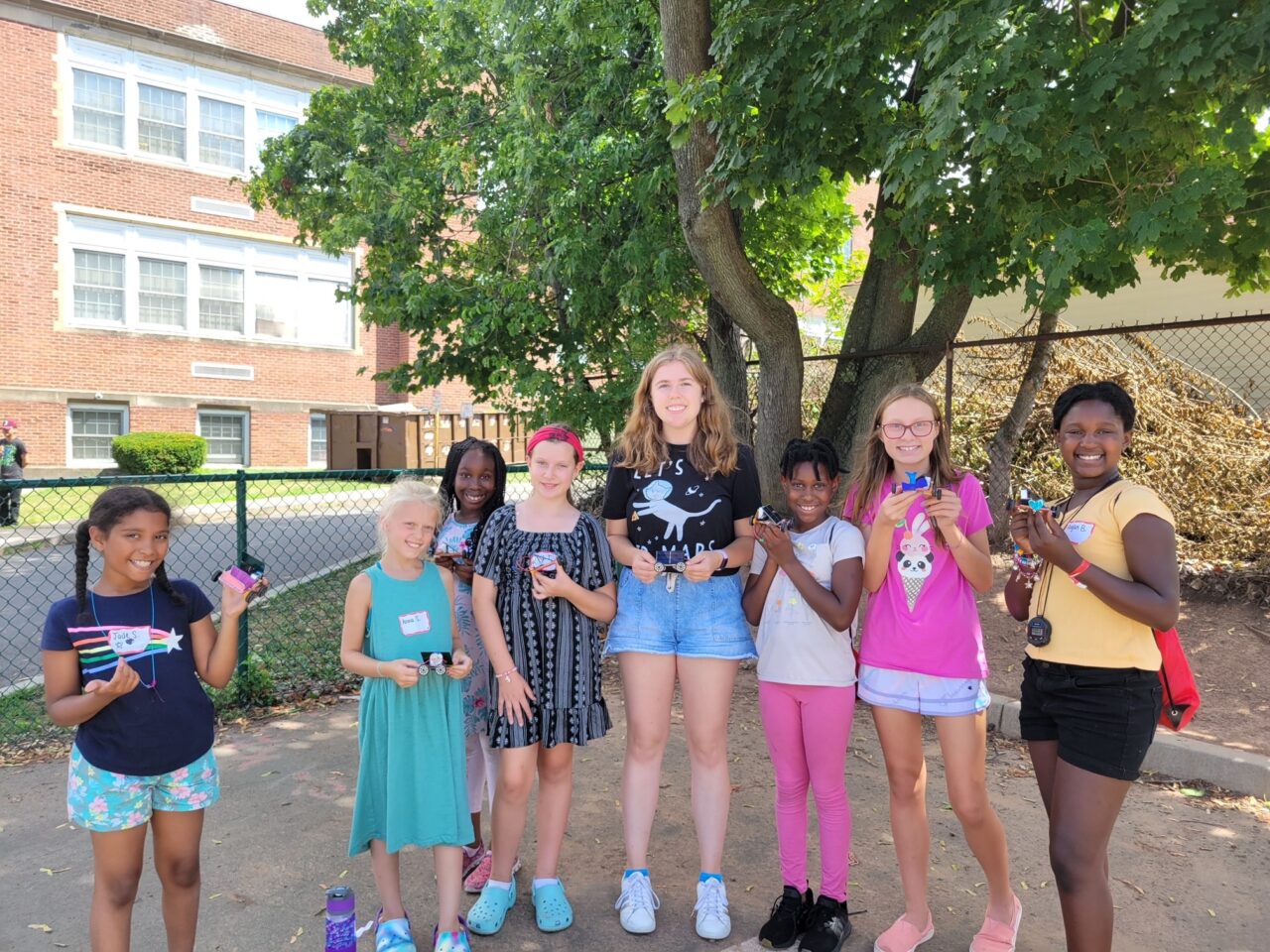 Erika Taylor, associate professor of chemistry, didn’t have a single female science teacher during her academic career. The lack of female representation in the field had an impact on her journey.

“I had to swim upstream the whole time. That is what it felt like,” Taylor said.

In an effort to make sure other young women don’t feel the same way, Taylor and Meng-ju Renee Sher ‘07, assistant professor of physics, are working diligently to show girls that a life in the sciences is desirable and attainable.

The Girls in Science program, a partnership between Wesleyan and the Middletown Public Schools, hopes to help young girls between grades four through six see themselves as scientists. The annual summer camp, which started in 2014 and had been on pause the past two years because of the global pandemic, took place August 8-12 at Macdonaugh Elementary School in Middletown.

“To continue with the analogy, we are trying to make a small, sheltered place for these girls to swim around in science a little bit,” Taylor said.

Girls in Science provides opportunities for girls and young women to explore their interests in science and develop critical skills to be used in their scientific pursuits and beyond. Throughout the week, the students do experiments and projects, having a good time with each other and mentors from Wesleyan and local high schools. “We are hoping that the students will be fully immersed for a week and see that science can be fun and see us as role models,” Sher said.

There is a serious underpinning beneath the fun. Middle school is where most young girls lose interest in STEM related subjects, Taylor said. Pressures to conform to social expectations can often derail young girls who previously expressed interest in STEM subjects. By intervening at this age, offering examples of women who make their lives in the profession, Taylor, Sher and their colleagues hope to stem the losses.

Taylor has heard from parents who described an increase in their daughters’ grades after going to the camp. Still others who participated in the program years ago have gone on to study STEM related subjects.

“This is an opportunity for them to meet other enthusiasts because (women scientists) might not be well represented in their school. For students who haven’t had the exposure, hopefully they’ll find something they like and they’ll consider science in a new way,” Taylor said.

Sher recalled watching the girls become so engrossed in working with solar cells that the plans for the rest of the day went on hold while they completed their work. “We want them to get the actual experience that science isn’t always just following steps A, B, C, D to an outcome. You have to tinker and play. And if it doesn’t work, you go back to the drawing board and try again,” Sher said. It’s satisfying for Taylor and Sher to see the students blossom over the course of the week. They start to share more about themselves. The approach to their science projects is creative in a fresh, new way.

They might even start to see themselves a little bit differently.

At the beginning of the week, Taylor, Sher and her colleagues ask the young girls to draw a scientist. Almost unfailingly it is an old man in a white coat – an Einstein caricature.

“At the end of the week, we ask them to draw scientists again to see of their image would change. What they draw looks much more like them,” Sher said.

previousLove of Learning and Teaching Leads to State Department Fellowship