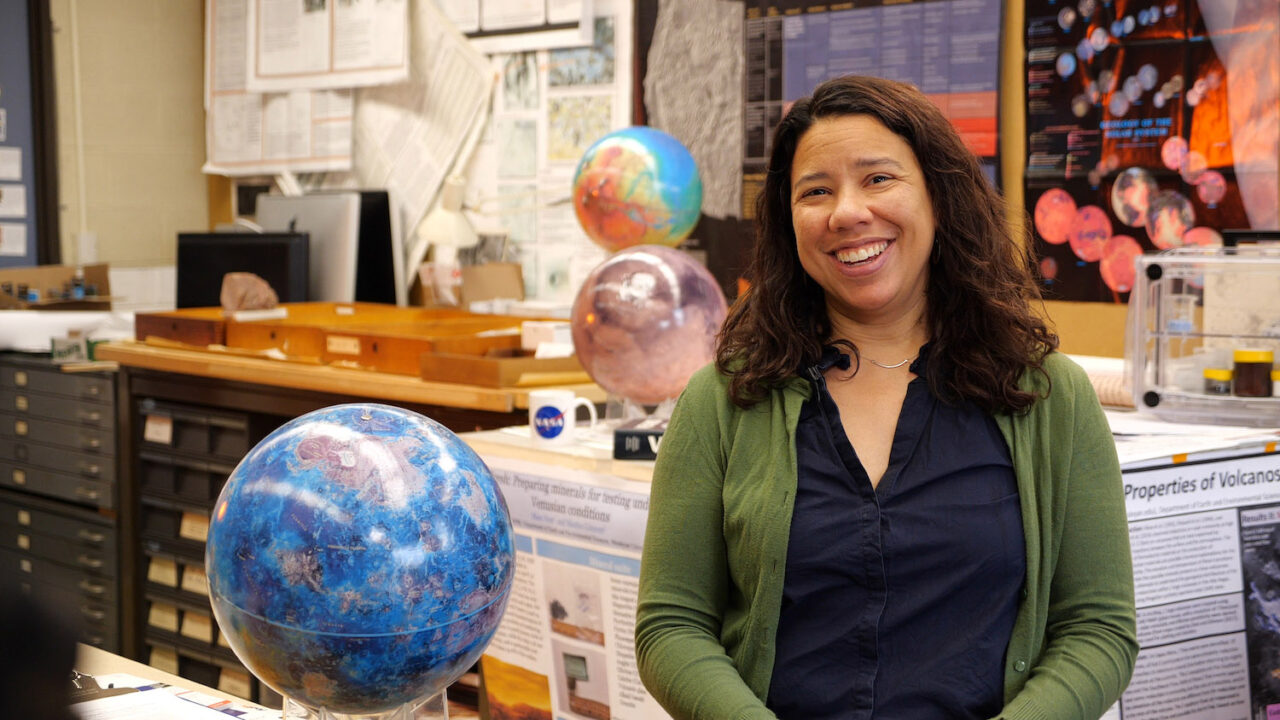 Martha “Marty” Gilmore, the George I. Seney Professor of Geology and professor of Earth and Environmental Sciences, has been awarded the 2022 Claudia J. Alexander Prize from the Division for Planetary Sciences of the American Astronomical Society (AAS) for her study of Venus’ geology.

Gilmore is a Science Team Member on the DAVINCI and VERITAS missions to Venus, and the principal investigator of a Venus Flagship Mission Concept Study for the Planetary Decadal Survey. Gilmore’s work has “helped usher in a new decade of exploration of Venus with the selection of two new NASA Venus missions,” according to the AAS.

In addition, AAS cited Gilmore’s service through community studies and panels relating to Venus, and her mentorship of over 20 student theses. Nine of these students have received their PhDs and are working as professional Geologists, in the energy industry, at Los Alamos National Lab, as faculty at Johns Hopkins, and as a staff scientist at Silent Spring Institute. Seven are in the process of pursuing their PhDs, and over half of these students are women.

“It was a transformative experience to have a strong woman scientist as a mentor. That was something I’d never had before, and it made me realize how important it is for young women scientists to have role models like Marty who are making big waves in their communities,” said Terra Ganey ’21, currently a PhD student in Earth and planetary sciences at the University of California at Santa Cruz.

Mentorship and representation are important to Gilmore. “It is critically important that there are people who look like you in your field,” she explained, speaking from personal experience as a Black woman. This is why Gilmore belongs not just to professional organizations such as Women in Planetary Science, but also the Women of Color+ Project, and the BlackNASA LinkedIn Group.

The Claudia J. Alexander Prize is named for the geophysics and planetary science research scientist who worked for NASA’s Jet Propulsion Lab. A strong advocate for women and minorities in STEM fields, Alexander served as a mentor to young girls of color to encourage their passion for science. Alexander ended her career as project manager and scientist of NASA’s role in the Rosetta mission.

“The fact that Claudia Alexander existed is very powerful. The presence of her makes me feel protected, like having ancestors in your field,” Gilmore said. “Receiving this award is very meaningful. It makes this honor very special to me because of her.”

Gilmore’s passion for Venus has extended beyond student mentorship, as she has been a driving force for Wesleyan’s Planetary Science Group. She was a leader in developing Wesleyan’s planetary science course cluster, as well as the MA concentration and minor. Having produced 87 BA, MA, and PhD graduates, Wesleyan is now one of the top planetary science graduate programs in the United States, with six primary faculty, five affiliated faculty across five departments.