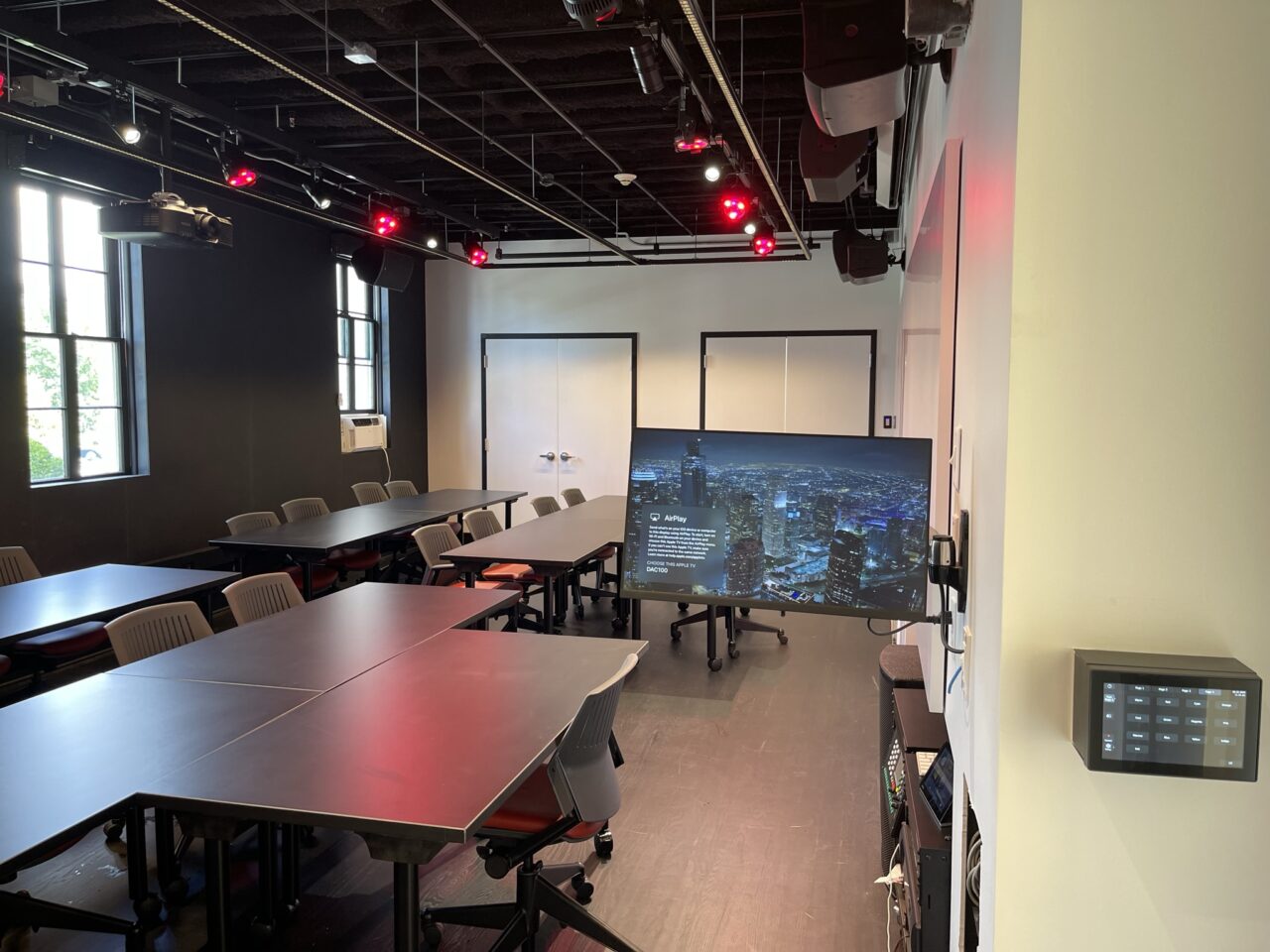 For decades, the former Davison Art Center located in the Richard Alsop IV House at 301 High Street has been a focal point for the visual arts on campus, housing an invaluable and wide-ranging print collection.

With the collection’s move to the Olin Library, the old building has a new artistic focus as part of a Digital Design Commons on campus supporting music, dance, theatre, and visual art.

“The idea is for this to be a tech hub for the arts,” said Roger Mathew Grant, dean of the arts and humanities. “The arts are always at an intersection of the technical and the aesthetic. Digital media is where that is most pronounced for us now because that’s what’s new in the current moment.”

The Alsop House was designated a national historic landmark in 2009 as an important example of Romantic Classicism in American architecture. It was purchased by Wesleyan in 1948 using funds given by Harriet and George W. Davison ‘1892.

The idea for the enhanced program in the building goes back to 2012 when digital tools, like 3d printers, were given a home there. It took a $500,000 grant from the Sherman Fairchild Foundation to move the project forward in 2018. COVID stalled the work a bit, Grant said, but the process of converting the facility is now moving forward.

The first phase of the project was completed this fall with the transformation of a former art history classroom into a state-of-the-art multimedia classroom, complete with a rotating projector and high-end sound system. New faculty focusing on multimedia will also support the initiative.

“The idea is that you can use this room for teaching, installation, or performance,” Grant said.

It hasn’t taken long for students to embrace the new facility, Grant said. “Before this room even opened there were students working on creating these really rich video pieces about performances and visual arts happening on campus,” he said. “We are getting artwork that is responding to other artwork”

The next phase of the project will include a motion capture studio, printing and graphics labs, new sound booths, digital work stations, and tutoring facilities. There will also be some rehabilitation done on the building itself.

The center can be a place to explore time-based media and performance documentation, Grant said. Capturing the beauty of the live arts on camera can be elusive – the visual vocabulary is different than that of film and requires a new perspective. “For a long time, there has been interest in performance documentation, but the pandemic really underscored the need for it because of the difficulty of getting audiences into theatres,” Grant said.

It can also be a place for creatives to take their ideas and conjure them in three dimensions, like a theatrical projection designer, for example, or a visual artist working with video. As students from all different artistic disciplines descend on the building, a delicate alchemy of expression is starting to happen. Grant is pleased to see a small scene developing at Alsop. “I had no idea what would happen, but it is a little bit of an ‘if you build it, they will come’ phenomenon occurring here,” he said.

Healthy scholarship and practice around digital performance, a relatively new area of study, gives another opportunity for Wesleyan students to have a well-rounded liberal arts education.

“This is so central to what we do. At Wesleyan we honor creative practice as research. We have discourse about art. We have countless ways of mediating aesthetic experiences. Art generates important conversation. It generates new ways of thinking. It changes things. Growing in this way helps us connect to the rest of the world,” Grant said.

previousWesleyan in the News, September 2022