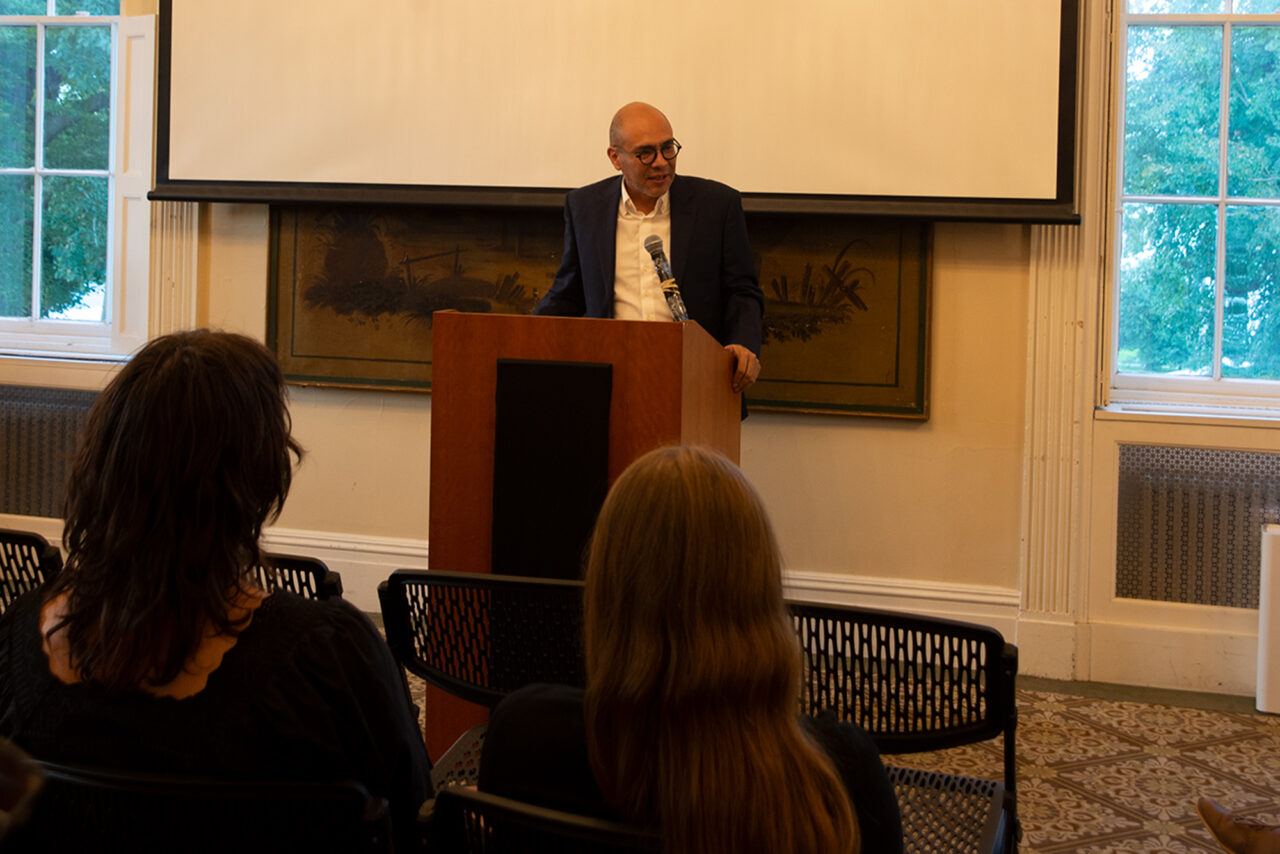 Yuri Herrera, part of Wesleyan’s inaugural Shapiro-Silverberg Distinguished Writers in Residence program, is regarded as one of the most remarkable writers in contemporary Mexican literature. In spare, weighty prose flecked with language-bending neologisms, Herrera explores borders—the physical, the social, and beyond—in books like The Transmigration of Bodies and Signs Preceding the End of the World, the latter of which The Guardian named one of the 100 best books of the 21st century. A professor at Tulane University in New Orleans, Herrera holds an MFA in Creative Writing from the University of Texas at El Paso and a PhD from the University of California at Berkeley. The English edition of his most recent work, Ten Planets, is set for release in March 2023. (Interview has been edited for length and clarity.)

Q: How did you come to Wesleyan as part of the Shapiro-Silverberg Distinguished Writers in Residence program?

A: It was really a surprise. It’s not something that we apply for—the person who suggested my name was María Ospina, a great Colombian writer and professor in the Department of Romance Languages and Literature. I was finishing a novel that I’m now editing with my publisher, and I really wasn’t sure what was next. I’m a professor at Tulane in the Department of Spanish and Portuguese, but it’s not a creative writing position—I teach classes for undergraduate and graduate students, but there’s no creative writing program in Spanish. This gives me the space to stop and think about what I have done so far, the direction where I can go. It’s also a good opportunity to get out of a certain inertia. I love New Orleans, and I consider it my second home after Mexico, but after a while it can be a little bit exhausting.

Q: You’re teaching SPAN 225: Creative Writing in Spanish. What do you want your students to take away from the semester?

A: When I teach creative writing, I stay away from the idea of craft. For me, craft is a very specific, technical thing, and it’s the least important part of writing. It’s more about finding your relationship to language. How do you understand the musicality of your language? How do you reformulate what you think you have to say? I ask students to come up with a couple of possible story ideas, and I ask them to retell them, to reformulate and rethink them. Think about what Picasso used to do with Cubism: You have one object, and you look at it from many perspectives. We’re also going to listen to music, write some poetry as an exercise, and read what I think are some of the best short stories in Spanish.

It’s important that students read literature from other places in those other languages. Text is not only words: The musicality of language also creates meaning and adds another layer. I think there is a whole different perspective—on life, on gender, on power, on the role of culture.

Q: The English translation of Ten Planets is out next year, and you’re at work on a new novel about Benito Juárez. What themes and frontiers are you exploring now?

A: I wrote Ten Planets while I was working on a on another book, A Silent Fury: The El Bordo Mine Fire, about a fire that happened in a mine in my hometown. That book is not fiction—I had very strict limits on how to work with this story. So, on the side, I started working on these short science fiction stories. This is something that I have done since when I was a kid. Through these stories, I talk about certain things that concern me and that are present in my other books: the phenomenon of migration, the problems of language, the relation between art and power.

The other book is about the time Benito Juárez, the Mexican president, spent exiled in New Orleans. Even though Benito Juárez was in New Orleans between 1853 and 1855, there are no documents—there’s pretty much nothing. I had a blank space, a parenthesis. I use this blank space to talk about what the city could have done to this character who, immediately upon returning to Mexico, became the country’s most important political figure. The book is grounded in history, and I have certain limits, but I have a lot more freedom.

nextLines of Prose, Drawing, and HVAC Systems at the Zilkha Gallery Fall Exhibition