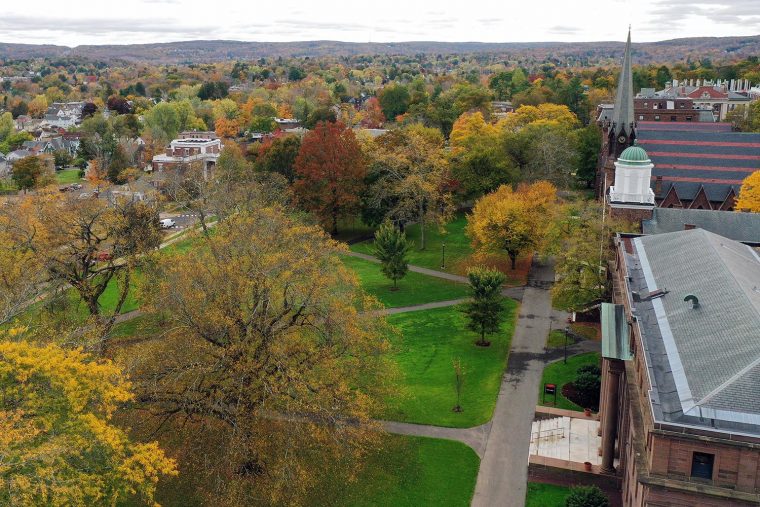 Zachariah Ezer, a 2015 Wesleyan University Olin Fellow was chosen as one of 7 playwrights for Theater J’s Expanding the Canon initiative. The program seeks to correct and broaden the historically limited portrayals of Jewishness on U.S. stages and around the world.

Erika Franklin Fowler, professor of government, and co-director of the Wesleyan Media Project was quoted in an article about the national implications of the local CT-5 district race for Representative, “Outside group activity is off the charts … I don’t remember the last time, if ever, that the Hartford media market made the top list of media markets.”

President Roth was featured in College Mission: Protect Democracy in an excerpt from diverse perspectives presented by Citizens & Scholars on October 25. The article was earlier published the Boston Globe.

Sonali Chakravati, professor of government and Director, Allbritton Center for the Study of Public Life long form article, Jurors Can Protect Abortion Access was published in the Boston Review October 25.

Andy Curran, William Armstrong Professor of the Humanities appeared on France 24 in a television interview about his new book, Who’s Black and Why? The Hidden Chapter from the Eighteenth-Century Invention of Race.

President Roth published a book review, Self-help philosophy, inspired by Socrates, that avoids hard questions, in The Washington Post about The Quest for Character.

Merve Emre, Distinguished Writer in Residence, published the article, The Illusion of the First Person in the The New York Review of Books. It is a historical survey of the personal essay, which she writes, “shows it to be the purest expression of the lie that individual subjectivity exists prior to the social formations that gave rise to it.”

Noah Hutton ’09 was featured in the New Yorker article, The Appeal of Scientific Heroism about his documentary In Silico, which tracks the creation of a simulated brain.

Peter Rutland, professor of Government, and Russian, East European, and Eurasian Studies published a piece on October 18th for the Quincy Institute on why Vladimir Putin is fixated on Crimea.

Steven E. Stemler professor of psychology and professor and co-Chair of the College of Education Studies had his Learner Engagement and Attendance Program highlighted in the New York Times story, “The Key to Getting Students Back in Classrooms? Establishing Connections.”

Peter Rutland, professor of Government, and Russian, East European, and Eurasian Studies gave a paper on why the West has failed to secure the support of the Global South in the Ukraine war, to a conference at the Program on New Approaches to Researching Security in Eurasia in Washington D.C., on September 30. The paper was published October 17th.

Robyn Kimberley Autry, associate professor of Sociology, explored the significance of Supreme Court Justice Ketanji Brown Jackson’s name in piece published in NBC Think on October 3. “The significance of that lone African name being listed among the 115 others since the court’s inception cannot be understated. It represents a powerful twist in the history still unfolding since the first enslaved Angolans arrived on the coast of Virginia in 1619,” Autry wrote.

Michael Bennet ’87 Senator from Colorado, was the subject of an article in The New Republic about his re-election campaign in light of authoring Expanded Child Tax Credit legislation, which “lifted millions of kids out of poverty.”

Gary Yohe, professor of economics and environmental studies wrote an Op-Ed in The Hill, Antarctica’s Melting Glaciers are No False Alarm.

Peter Rutland, professor of Government, and Russian, East European, and Eurasian Studies organized a zoom panel October 6 on ‘Nationalism after the Ukraine war‘ for the Association for Study of Nationalities, which is available as a recording.

Leander Dolphin ’99 has been appointed by Governor Lamont to Chair the Connecticut Judicial Selection Commission, which is the nominating body for Judges for the Superior, Appellate, and Supreme Courts.

Peter Rutland, professor of government, and Russian, East European, and Eurasian Studies was featured in a Newsweek story, Vladimir Putin Has More Friends Than You Think, about his article for the geopolitical network PONARS Eurasia, due out next week.

Balazs Zelity, assistant professor of economics was quoted in the Hartford Business Journal about the U.S. Navy’s $112 billion fleet of submarines being built in Connecticut at the General Dynamics Electric Boat campus in Groton, and the effects on the surrounding communities.

Jason Kim ’94 was named in the Top 25 Healthcare Technology Leaders of Austin for 2022. He is the President and COO of Molecular Templates, a clinical-stage biopharmaceutical company.

Logan Dancey, associate professor of government was interviewed by the CT Examiner about the new poll showing the tightening race between candidates for Governor and Senate in Connecticut.

Margot Weiss, professor of American Studies and Anthropology, was quoted in BeautyMatter’s article Let’s Talk About Sex: Hims & Hers Debunk Sexual Myths. “It’s a more fluid time than this mythical past when there were only hard-core normative people and radical fringe people,” she was quoted in her analysis.

Buck Quijada, associate professor of religion, had an article published in Religion News which argues that, ” ‘Animism’ recognizes how animals, places and plants have power over humans.”

Wesleyan is partnering with the National Education Equity Lab to expand High School math programs for historically underserved communities along with 10 other universities, including HBCUs and the Ivy League.

Elijah Joshua Pajarillaga ’25 won an award for his film, “Steps on the Shore.” The film was named Best Made in the Marianas at the 2022 Guam International Film Festival (GIFF). He wrote, directed, and starred in the film.

Christina Anderson, a former playwriting professor at Wesleyan, has been named the 2022 recipient of the annual Horton Foote Prize for her play, the ripple, the wave that carried me home. She will receive a $50,000 prize at an awards ceremony October 24.

Caitlin Meister ’01, was interviewed about The Greer Meister Group, a NYC-based private educational consulting and tutoring practice, and how they navigated COVID.

Will Fraker ’14 “Gender is Dead, Long Live Gender: Just What is ‘Performativity’? was recently re-published at Britannica.com in The Forum column, Creative Commons.