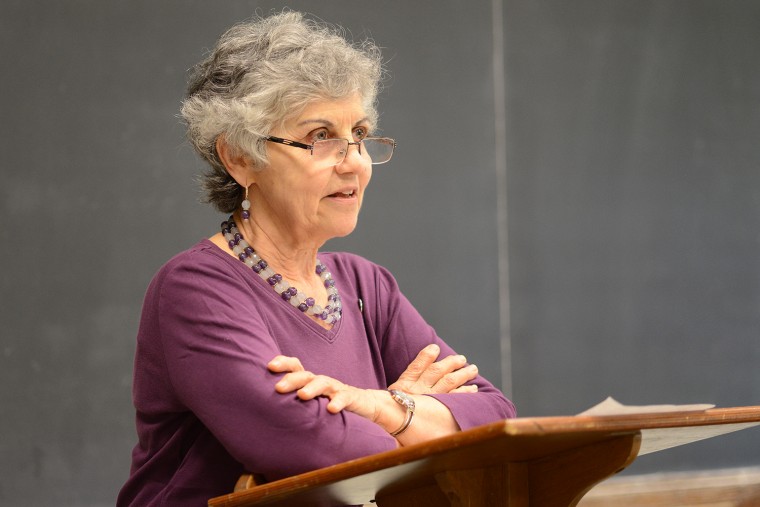 Krishna Winston, Marcus L. Taft Professor of German Language and Literature, Emerita, and Professor, College of the Environment, Emerita, was recognized with the Tom ODell Distinguished Service Award by the Rockfall Foundation at a ceremony held Thursday, October 6.

The award, which recognizes long-term accomplishments in environmental conservation and preservation, was given for Winston’s many years of advocacy for the environment in Middletown.

Winston’s formal service to the City began in 1989 when she was appointed to the task force that designed Middletown’s recycling program. When mandatory recycling began in Connecticut two years later, she became the chair of Middletown’s Resource Recycling Advisory Commission, a position she still holds. Currently, she is a member of the Pollinator Pathway group and the City’s Clean Energy Task Force (CETF). In addition, Winston convenes the Sustainable Middletown Team, is president of the Jonah Center for Earth and Art and participates in the Environmental Collective Impact Network (ECoin).

“The Rockfall Foundation encounters many individuals in the Lower Connecticut River Valley who are working to improve the environment and to living a more sustainable lifestyle; no one is more dedicated to that effort than Krishna. She is a true environmental champion,” said Tony Marino, the foundation’s executive director. His interview with Krishna, pictured below can be viewed here.

Winston’s passion for the environment began long before she arrived in Middletown 50 years ago. It started as an outgrowth of her upbringing in southern Vermont. Growing up on a subsistence farm, with its hard work and isolation, had a lot to do with contributing to her connection to the environment and experiencing the rhythms of the seasons. Her family cooked with a wood stove, heated the house with a coal furnace, owned a Jersey cow, and raised much of their food. Experiencing this way of life and helping with seasonal chores like haying and maple-sugaring, she learned “where things came from and where they ended up.”

Having parents who worked at home gave her a work ethic and influenced her perspective on work-life balance. “Work is life if you do what you love,” Winston said.

Winston’s interest in recycling work came from a childhood where the family repurposed everything. “When I first arrived in Middletown, I looked for recycling and found the drop-off at the City Yard,” Winston said.

When one of her former students, Janet Brooks ’75, who had become an environmental attorney, started a petition to the Common Council to establish a Recycling Task Force, Winston not only signed the petition but also joined the Task Force. “I stayed on the task force for one or two years, and [Krishna] stayed forever. I didn’t realize I was starting a 30-year passing of the baton,” Brooks said.

From that early connection, Winston has contributed to sustainability in Middletown in numerous ways. This summer, she spent four hours almost every week at the Farmers’ Market on the Green, educating shoppers on recycling and salvaging food waste for composting. She has also promoted recycling and sustainability at Wesleyan, serving on committees and developing a course called “The Simple Life.”

Her work ethic has impressed her fellow CETF members and is an example of community engagement, linking Wesleyan and Middletown together. “Krishna is one of the most active volunteers on the Clean Energy Task Force. Whether helping pull together an Energy Plan, working through the Climate Emergency Resolution that was passed unanimously by the Common Council, or compiling information on Energy Coordinator job descriptions, Krishna’s expertise and sharp eye have been invaluable,” said Anna Salo-Markowski, Chair of the Middletown Clean Energy Task Force and Development Associate at Wesleyan University.

Equity is a big part of Winston’s sustainability efforts. She finds it frustrating that much environmental activism doesn’t connect directly with social justice. However, Winston is gratified that sustainability awareness is growing, filtering down to initiatives that work with younger children, like school gardens. “I am eager to spread the word and work with the low-income and minority populations who always bear the brunt of environmental abuses and crises,” Winston said.

Despite the challenges, Winston exemplifies pragmatic idealism and remains hopeful, “One thing at a time, step by step.”

Much like her work translating German literature into English, Krishna has translated lessons about the environment from her childhood into a commitment to environmental sustainability, from which she hopes the Wesleyan and Middletown communities will benefit future generations.

nextWesleyan in the News, October 2022