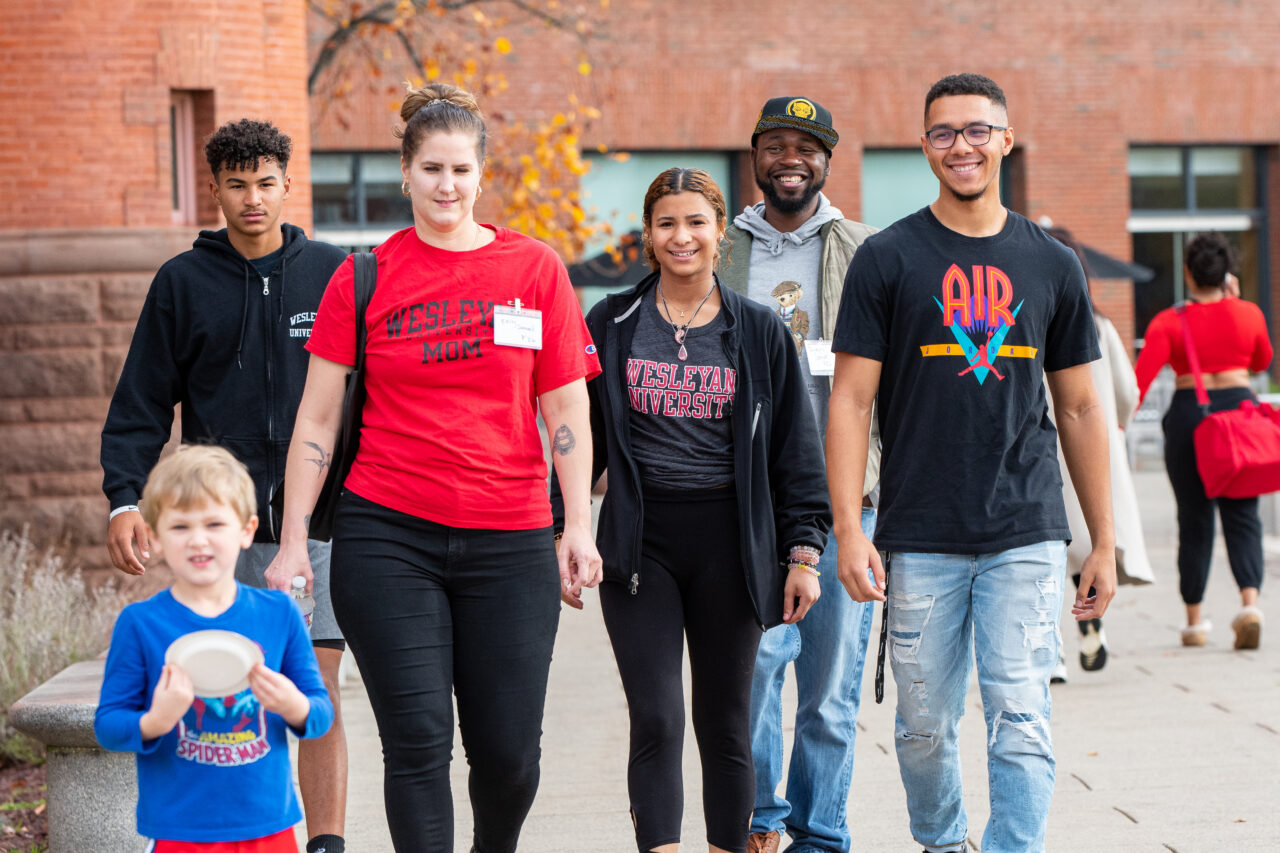 Homecoming and Family Weekend 2022 lived up to its billing – families reunited, a couple got engaged, a deep legacy was honored, and the Wesleyan community came together to celebrate.

As he gathered with friends on Andrus Field, Chris Richardson ’93, a former Cardinal running back and team captain, reflected on what Homecoming means for student-athletes. “You are able to give all of yourself on the field with your teammates for a shared vision,” Richardson said.

The Homecoming game might be the centerpiece of the weekend’s festivities, but in Wesleyan fashion, it was not the only celebratory event. There were performances and talks, tours and lectures – the full complement of activities that makes Wesleyan a vibrant community. (Photo gallery)

The newest members of Wesleyan’s community trickled onto campus Friday afternoon as families met their loved ones and immersed themselves in the glories of the Wesleyan campus on a perfect fall weekend. They took campus tours and went to WESeminars to get a sense of the University’s opportunities for deep intellectual engagement. Charles Barber, associate professor of the practice in letters, gave a standing-room-only talk on his new book “Peace and Health,” a history of Middletown’s groundbreaking Community Health Center. “This is Middletown’s and Wesleyan’s story, 50-50,” Barber said.

In Olin Library’s Davison Rare Book Room, Dietrich Family Director of Special Collections and Archives Suzy Taraba spoke about 13 precious objects in Wesleyan’s collection and in doing so, gave a sense of the key highlights of her illustrious career at the University. She will be retiring this year. “It is very very hard to count my favorites out of such a stellar collection…The idea of favorites is a moveable feast,” she said.

On Saturday, cars pulled onto Andrus Field behind Corwin Stadium and set up shop for the afternoon. Enticing smells came from grills across campus and everyone’s sound systems created a crazy quilt of music—everything from hip-hop to ’60s rock. A couple of alums played bean bag toss as they sipped drinks: “This is the real competition today,” one of them quipped.

Sporting fun and intellectual stimulation aside, the weekend was a moment for loved ones to check in with each other.

Bailey Nadeau ’25 and her mom, Nicole, took a tour Friday afternoon of the construction at the new Public Affairs Center next to Olin Library. Inspired by courses taught by President Michael S. Roth ’78 and Assistant Professor of Psychology Michael James Perez, Bailey is thinking about changing her major. “Wesleyan has allowed me to explore so many paths I can take,” she said.

Andrea Marryshaw is exploring that very question with her daughter Camila ’25. She drove up from Washington, D.C. and they planned on having dinner, go to the football game, and see an a capella group. Camila’s interests are wide. She is currently studying three languages (Japanese, Italian, and Spanish) and music. Marryshaw isn’t sure what Camila will do after graduation, but said they’ve talked about becoming an interpreter or going into education. “It’s very special seeing her independence here on campus and seeing her dorm life and her interacting with her friends…She has a connection here that I hope extends beyond her time,” Marryshaw said.

For some students and their parents, the path is clear. Audrey Pritchard P’23 said the University has been a perfect fit for her son, Cole Goco ’23, who would like to work in film after graduation. “He knew all along that this was the place for him, and he was right. I couldn’t be more proud,” Pritchard said.

Life at Wesleyan isn’t just about finding the career one has upon graduation. It’s about many things, the moments of discovery, of fun, of friendship—and of love.

Alumni, staff, family, and friends came together Saturday morning to honor the memory of John Driscoll ’62, who led the University’s alumni relations program for over three decades. Driscoll died June 12, 2022, at 82 years old. “Wesleyan was at the center of John’s life and a core piece of who he was,” said David Hill ’86, Chair of the Alumni Association. “To know John was a joy.”

Over on the patio in front of the Office of Admission,  a different sort of special memory was being made. Key Session ’17 got down on one knee in front of Ketrah Mugambe ’18, and said, “This is where we met. Wesleyan is a place that makes us who we are and so, Ketrah, will you marry me?”

Mugambe paused, clutching her hands together in front of her face, smiling brightly. “Yes,” she said, and another Wesleyan memory was made.

previousWesleyan in the News, November 2022

nextWesleyan to Partner With Service To School