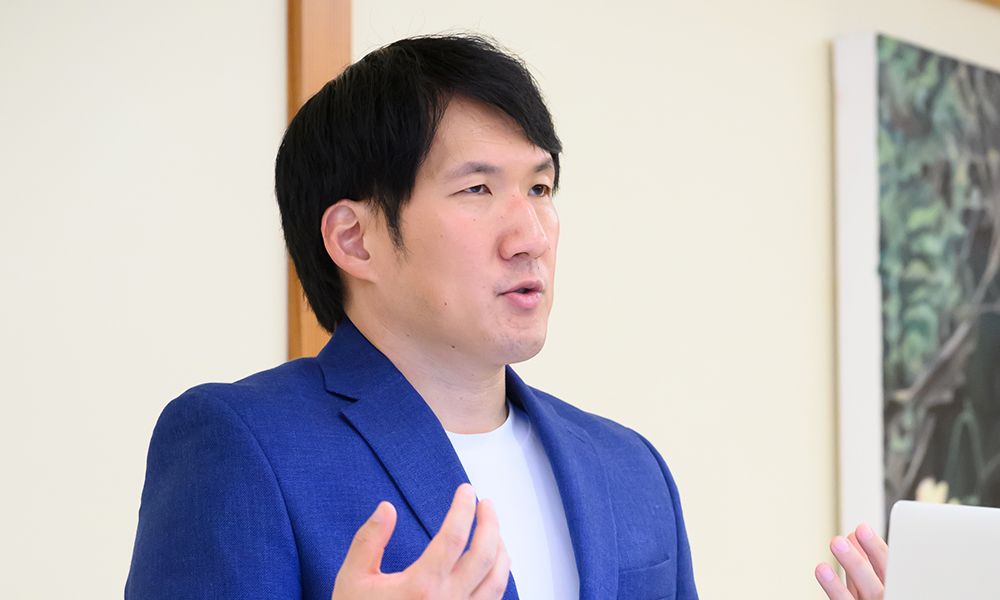 He’s more interested in the other stories that take place—someone’s personal political views, or the way that politics or economics intertwine with sports. “How they approach…their

individual value, their roles in society, their platforms that they’re…given as these athletes are more and more seen as celebrities and people of influence in different countries,” said Berkman.

For the past decade, New York-based journalist Berkman has contributed to The New York Times Sports section, and has also reported on business and investigative news. He initially focused on sports in Asia, as well as Asian American athletes at both the professional and collegiate levels, detailing their personal stories, backgrounds, and what drew them to sports.

Berkman spoke at Wesleyan’s College of East Asian Studies in November in conjunction with the exhibition Massive Power Ball by Karen Xu ’22. In her first institutional solo exhibition, Xu examines basketball, which she grew up watching in China, and its political resonances, considering the dynamics of the China-US relationship and Chinese Communist Party ideals. These are the ties that intrigue Berkman.

During his talk, Berkman discussed the role sports play in Asian culture, both on a national and global scale, and some of the athletes who have become iconic figures.

Berkman mentioned, as an example, his fellow New York Times colleague Matt Sullivan’s book Can’t Knock the Hustle: Inside the Season of Protest, Pandemic, and Progress with the Brooklyn Nets’ Superstars of Tomorrow (Dey Street Books, 2021), which touches on the NBA’s relationship with China. “It’s again balancing that idea of free speech but also thinking about the millions of dollars that could be at stake here for both individuals and teams,” said Berkman.

The Houston Rockets selected Shanghai Sharks basketball player Yao Ming as their first draft pick in 2002. Following his retirement from the National Basketball Association in 2011, Ming is now chairman of the Chinese Basketball Association, his former league. Over the last decade, the NBA has launched global academies to seek out talent from countries in East Asia. “His success opened up a flood of economic sponsorship business opportunities for not only companies in China—shoe companies, sporting good companies—but also the NBA itself,” said Berkman

Japan hired American Tom Hovasse to coach their women’s team, adopting the breakneck-paced offense strategies of the NBA’s Phoenix Suns. “The United States won the gold medal, but to see Japan essentially come in second place and win the silver medal was something that you couldn’t have imagined 15, 20 years ago,” said Berkman, who thinks their success last year in Saitama will only increase the sport’s popularity in Japan going forward.

Jonquel Jones, who has played basketball for the Connecticut Sun since 2016 and was the league’s Most Valuable Player in 2021, spent her first off-season playing in Korea. She told Berkman she went there to experience their rigorous style of play to better prepare her for the WNBA.

Baseball continues to be popular across Asia. In 2017, Berkman traveled to Tokyo and Hokkaidō, Japan to report on pitcher, designated hitter, and outfielder Shohei Ohtani, before Ohtani started playing baseball for the Los Angeles Angels in 2018. Berkman wanted to find out how Japanese people viewed Ohtani, who was being called “the Japanese version of Babe Ruth” by the American media. “I had this question in my mind of how many Japanese people are even familiar with Babe Ruth or saw Babe Ruth,” said Berkman. “I think most people, if you follow baseball, you’ve heard the name Babe Ruth. But does that really resonate on a personal level with the people in Japan?”

The Nippon Professional Baseball fans, former teammates, and Ohtani’s opponents whom Berkman interviewed found the Babe Ruth analogy kind of humorous because it didn’t really resonate—no one in Japan called Ohtani that. “A couple of people I talked to compared him to kind of a mythical Japanese samurai,” said Berkman of Ohtani’s dual pitching and hitting skills. But Babe Ruth was an easy comparison and frame of reference for American readers.

Berkman also detailed how, at the start of the pandemic, sports-starved American audiences watched games being streamed by the Korea Baseball Organization, which was one of the first leagues to start competing again. He believes that the KBO could be considered the number three international baseball league, following America and Japan. Instead of playing in the minor leagues, a lot of American players now go to Korea and play for a couple years to try to build up their career. “They know that scouts are now watching games for major league teams in Korea, in Japan, and they can kind of get back on the radar of a major league team by going through that route,” said Berkman. “And so you do see this idea of professional sports leagues in East Asia getting this sort of legitimacy over the years.”

Berkman said that in East Asia the Olympics are still seen as a prestigious international event that shows a country’s strength and power. For many Americans “the Olympics…are seen as this kind of corrupt endeavor when you think about all the money that goes into investing and building new stadiums, building facilities for the games that just go ignored after or just kind of go to rot, waste,” said Berkman, pointing out the main Olympic stadium that has sat dormant in China. “I think a lot of people in the West view the Olympics as, ‘Why would anyone host that?’”.

The Japanese government felt differently. While in Japan in 2017, Berkman visited Fukushima to speak with athletes, government officials, and local residents, since the city had announced they would be hosting some events during the Tokyo Olympics. This was six years after the 2011 nuclear disaster in the city, which had previously been a tourist area and an agricultural exporter. “I wanted to get this idea of what they thought about…the government specifically giving their city, this area, Olympic events under this very political purpose of trying to rebrand the image of a place,” said Berkman. “It didn’t sit well with a lot of people.”

The local Fukushima city government supported the idea of using the Olympics as a vehicle to present a different image of the region. One of the most jarring things Berkman remembered was at the Fukushima Baseball Stadium, where a few hundred yards away at the park, thousands of black trash bags stockpiled waste from the 2011 disaster. “This place…was going to be the center of a very popular Olympic event, and you still had people storing waste cleaned up from the tragedy,” said Berkman.

Berkman’s book A Team of Their Own: How an International Sisterhood Made Olympic History (Hanover Square Press, 2019) tells the story of the Unified Korean women’s hockey team from the 2018 Winter Games in PyeongChang, South Korea. The country had previously hosted the 1988 Summer Games in Seoul, but 30 years later they wanted to present an image of being a technologically-advanced world power.

Female athletes, inspired by American and Canadian teammates, were bucking the norms of expectations and restrictions. The women’s team went on strike following the games due to inequality in pay, funding, and coverage. The athletes also felt like political pawns between North and South Korea.  “By playing sports and being involved in sports, it becomes a very political sort of statement,” said Berkman.

The global power of sports in East Asia continues to expand as American sports like basketball and baseball reach new levels of popularity. “In terms of thinking about Asia as a place sports are not only reaching new levels—when sports become so popular in places, you see different aspects of different kinds of bodies, whether it be government or businesses, wanting to get involved, which raises the stakes and provides a lot more attention, provides a lot more income,” said Berkman.

Karen Xu’s “Massive Power Ball” is on display through Friday, December 9, 2022. Hours for the College of East Asian Studies Gallery at Mansfield Freeman Center are Tuesday through Friday from noon to 4 p.m.