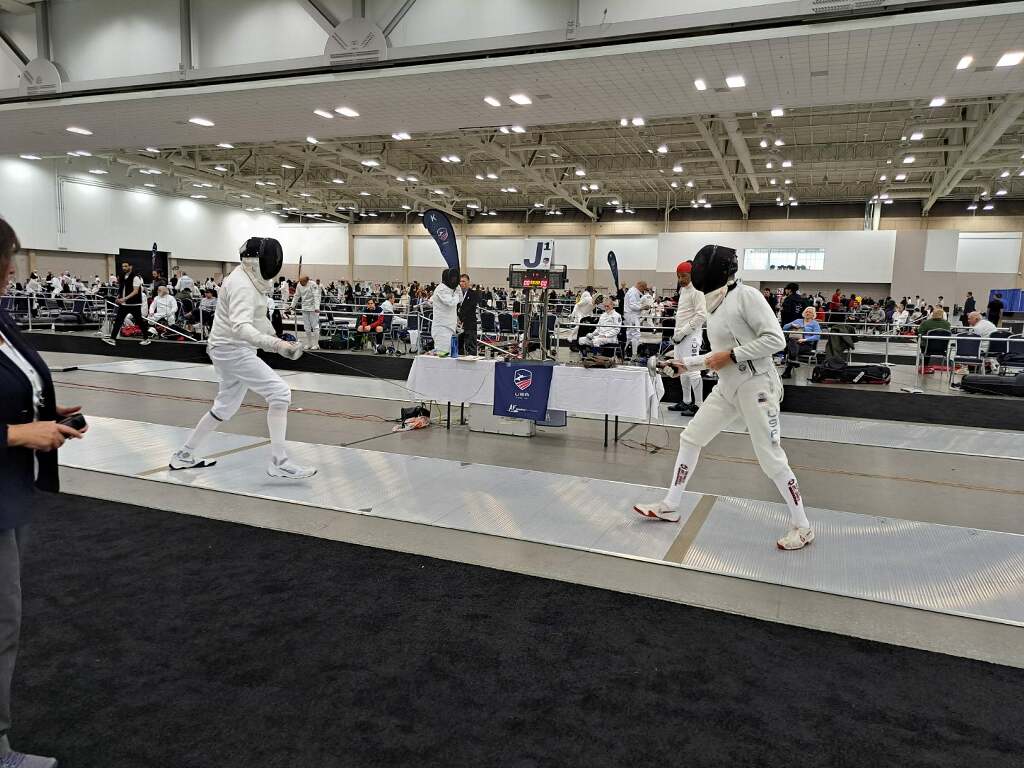 Deep philosophical ideas aren’t the only things Hedding Professor of Moral Science Joseph T. Rouse has been dueling with as of late.

Rouse has been training for the United States Veteran Fencing team, a team comprised of fencers over the age of 70. His first national qualifier this season will take place in January at the North American Cup in Louisville, Kentucky. His first bout a year ago against the current world champion in his age group ended in a loss, but Rouse thinks he’s got more than a fighting chance, having beaten his opponent the last two times they have faced each other.

While Rouse has been training, he is also putting the finishing touches on a new book to be published by the University of Chicago Press in Fall 2023 called Social Practices as Biological Niche Construction.

“The ways we think about human beings across the academy and in our ordinary ways of thinking is divided in half. We are living bodies that are physical objects composed of chemical processes. On one side of Church Street (Exley Science Center) we talk like that. We also have very rich and complex social lives, living in communities with different traditions. Those ways of understanding ourselves have been largely kept separate from one another. I argue in the book that that separation has been seriously misleading and show how to integrate our self-understandings as acculturated persons who are also part of the natural world,” Rouse said.

Over the past decade, Rouse has found a respite from his serious scholarly work in epee fencing, a sport descended from dueling. The thin triangular blade used is about 35 inches from guard to tip and weighs less than 27 oz. The entire body is a valid target and all it takes is 750 grams of pressure to score a touch with an electric epee.

“It’s very physical, but with fine-grained actions. You are holding the blade between two fingers and maneuvering around the other person’s blade. You are going in and then going out, sometimes powerfully sweeping their blade away and explosively going at them,” Rouse said, his hand miming the action of swinging a blade.

Rouse became interested in fencing thanks to his son Brian. When Brian finished middle school, he realized that he was not going to continue playing soccer and sought another sport. “He kind of liked the idea of fencing, you hang around with your friends and then you go stab them, he said” Rouse said.

As Brian got more successful at fencing, eventually qualifying for the final round of the NCAA championships, Rouse found himself drawn to the sport’s cerebral and kinetic nature. He also liked the people he met at those tournaments, where a mix of conviviality and intensity was the norm. .

Deterioration in his knees had made his chosen sport of volleyball more difficult, so at age 59 Rouse picked up a blade. He found he had a knack for fencing, often competing with his son. “Once I tried it, I realized it was kind of fun,” Rouse said.

Thanks to his height and reach, Rouse is able to traverse distance quickly, offering an advantage against many of his opponents. The sport takes tremendous mental acuity as well. If you lose focus, you’ll be hit. “It is about being able to see what’s happening in a three-dimensional space with the weapons and seeing what the opponent is trying to do to you,” he said.

In the middle of a bout, Rouse is thinking two or three steps ahead, seeking ways to disengage his opponent’s blade and launch his own lines of attack. “There’s a lot of geometric stuff,” Rouse said.

The idea that the cerebral is not separate from the bodily is a very important part of Rouse’s research (although he tends to perform better dueling when he is not as busy with work.) Neural tissue is some of the most energy intensive in the body, Rouse said. A sharp body can help bolster a sharp mind. “Volleyball and fencing have given me a very good appreciation for the ways in which understanding is a bodily skill,” Rouse said. “The academic life is more physically demanding than most people think.”