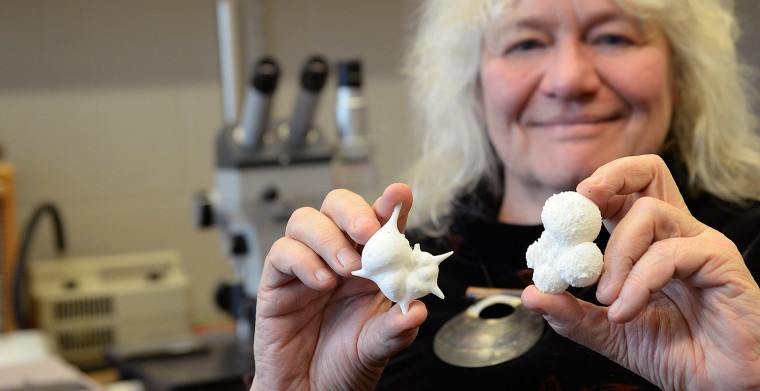 Thanks to her discovery of a global warming event that occurred 56 million years ago, Ellen Thomas, the Harold T. Stearns Professor of Integrated Sciences, Emerita, changed the way we think about climate change. Her research started with a serendipitous discovery of severe extinction of microscopic deep-sea organisms, foraminifera.

Because of her prolific and impactful research, Thomas, along with her colleague James Zachos of the University of California, Santa Cruz, was given the BBVA Foundation Frontiers of Knowledge Award in the climate change category. “Both laureates think that the destructive impact of the event should be a warning to us to curb greenhouse gas emissions if we wish to avert worst-case warming scenarios including sea-level rise, flooding, droughts, extreme climate events and loss of biodiversity,” according to a release from the BBVA Foundation.

“Ellen is one of the most highly cited scholars in her field and she has had an integral role in shaping the international geoscience community’s views of the Earth’s past climates,” said Janice Naegele, dean of the natural sciences and mathematics.

“It is always nice to get this kind of recognition,” Thomas said.

Thomas studies deep-sea, bottom-dwelling foraminifera, tiny unicellular organisms that produce shells composed of calcium carbonate. Foraminifera tend to be hardy creatures, reproducing rapidly and in tremendous quantity over wide areas on the ocean floor. By joining a scientific deep-sea drilling expedition to obtain sediments from into the ocean floor around Antarctica in 1987, an expedition in which Harold T. Stearns Professor of Earth Science Suzanne O’Connell also participated, Thomas was able to study how their shells changed over time due to changes in the environment.

A massive increase in the amount of carbon dioxide in the atmosphere about 56 million years ago caused the seas to increase in temperature and acidity, the impacts of which were found in the forams’ shells. She and her colleagues determined that what happened eons ago could be a possible analog for what climate change is currently doing to our planet, and what will occur in the future.

Drilling for these microscopic creatures has taken her to the coast of Antarctica, the middle of the equatorial Pacific Ocean – indeed, across the globe. However, if she hadn’t been persistent, she might not have made it at all.

She attended the University of Utrecht in the Netherlands, her home country. At European universities, students are expected to know what they are going to study as soon as they matriculate from high school, Thomas said. Studying science was always her primary goal. “I knew I wanted to study some combination of biology, chemistry, and geology,” Thomas said.

That led her to the paleontology department. While many of her fellow students were drawn to the study of larger fossils, Thomas thought in more minute detail. “I was the first generation in my family to go to college. We didn’t have a lot of money and if you looked around for a career, you had a much better chance with microscopic fossils, which don’t have to be used for just scientific research. They have been used extensively to direct drilling for oil, for instance. So, there is an industrial application,” Thomas said.

It wasn’t always easy being a woman in a male-dominated field, she said. Thomas had professors refuse to answer her questions in class or challenge why she wanted to get a degree in Earth science in the first place. “I don’t like to be told what I can’t do,” Thomas said. “I’m not a person who is easily discouraged, so I never looked back.”

She became the first woman to get a doctorate in Earth sciences from the University of Utrecht. She published 169 papers in her field of study and holds simultaneous appointments at both Yale (where she is a senior research scientist in the Department of Earth and Planetary Sciences) and Wesleyan.

Despite having retired from teaching in 2021, Thomas continues to serve as curator of Wesleyan’s Joe Webb People’s Museum, increasing the accessibility and public awareness of the University’s natural history collections. One way she does this is through using the IDEAS lab at Wesleyan to produce enlarged, 3D printed specimens of the single celled organisms, allowing for more in-depth exploration. This coming semester, she is working alongside students, theatre artists and the Center for the Arts to draw attention to the University’s collection of rare corals.

“It is really great to get the students involved. It is the very best way to do anything,” Thomas said.

previousResearch Shows Pesticide Could be Connected to ALS