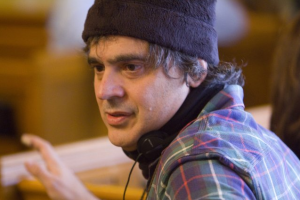 The latest film by director Miguel Arteta ’89, Cedar Rapids (Fox Searchlight Pictures), opened to positive reviews in mid-February after being well-received at the Sundance Film Festival. The comedy, written by Wisconsin native Phil Johnston, stars Ed Helms (The Office) as an earnest insurance salesman who is asked by his small town firm to attend an insurance convention in Cedar Rapids, Iowa, where he learns about life in a weekend as he befriends a motley bunch of party-loving conventioneers played by John C. Reilly, Anne Heche, and Isiah Whitlock Jr. (The Wire).

In her New York Times review, film critic Manohla Dargis praises “this wistful, equally tender and rauncy comedy of self-discovery” as well as Arteta’s direction. Dargis comments: “It’s a modest journey of a modest man that Mr. Arteta smartly doesn’t inflate in a movie that clocks in at a fast 87 minutes. In his characteristic unassuming fashion he gives the actors room to play, even as he keeps the mood as intimate as his filmmaking. And while Mr. Arteta likes a dirty joke as much as the next comic director, because those laughs burble up from characters whose raucousness comes from an honest grappling with life’s absurdities, the jokes sing as well as zing.”

In her Los Angeles Times review, Betsy Sharkey appreciates the “simple pleasures” and “sweetness” of the film: “ What helps turn Cedar Rapids into such good comic relief is that indie film auteur Miguel Arteta … and screenwriter Phil Johnston … have a great affection for Tim, a very decent sort, and they’re not afraid to show it — rare in an age when acerbic comedy is more the rage. If anything, the filmmakers … have taken a calculated risk in creating characters to laugh with, rather than at …” 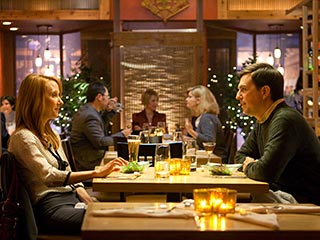 In a recent article in The Detroit News, Arteta, who was born in Puerto Rico, says he empathized with the script of the film. “I can relate to it as a foreigner, coming here when I was 16, not knowing how things work or who the good guys or the bad guys are … I can relate to this character being thrown into a big convention and not knowing what’s going on.”

Upon the release of the film, Arteta was interviewed by The A.V. Club at Onion.com and Interview magazine.

When asked by The A.V. Club about the sensibility of the film, Arteta says: “It’s tough times out there. I think we need comedies that are sweet. We need to enforce priorities that are actually important. When our country’s in a state of chaos, I think it’s important to serve up something that says ‘People, don’t forget, if you have good priorities, you’re good.’ You don’t need to be a chump, but you don’t need to lose your values. It’s really an old-fashioned, Depression-era mentality that drove me to want to make this movie.”

In Interview magazine, Arteta talks about the themes of family and friendship in the film: “Something that I’m always looking for in movies is the idea of how you make a new family. If you come from a dysfunctional family, how do you make a new family? I think a lot that attracted me to Cedar Rapids is the joy of creating an unexpected friendship that may last your whole life, out of the blue. You might meet somebody that may end up being a lifelong friend. Those first few days when you connect with that person are magical and they’re fun. I feel very lucky. I think we got the chemistry.”