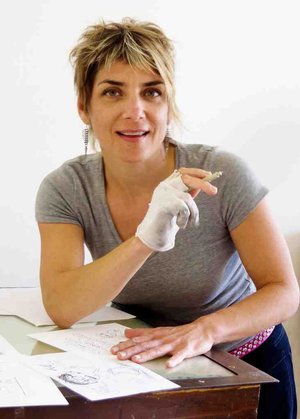 Ellen Forney ’89 was recently profiled by Tirdad Derakhshani in the Philadelphia Inquirer, who noted the artist’s “65 illustrations, doodlings, comic panels, and assorted visual asides” that play an important and integral part in the National Book Award-winning novel The Absolutely True Diary of a Part-Time Indian (Little Brown) by Sherman Alexie.

Over a three-year period, Forney worked closely with Alexie who “gave her freedom to explore and contribute” based on her own inspiration. Forney’s illustrations had to reflect the imagination of the book’s main character, Junior, “who is growing up on a reservation in Washington state, … an aspiring cartoonist who deals with his cultural and racial identity crisis — not to mention puberty — through his art.”

Forney is the author of several books of cartoons and teaches comics and literature courses at Cornish College of the Arts in Seattle.

“I would say that my work is embracing,” Forney says in the Philadelphia Inquirer article. “I try to be pretty straightforward and open. A lot of people will tell me that reading my comics is like reading a letter from a friend.”

Her most recent book, I Love Led Zeppelin (Fantagraphics Books), brings together a series of humorous “how-to” comics. For more about Ellen Forney’s work, go to her web site.