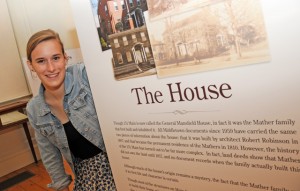 Charlotte Cottier ’12 spent the week hanging posters for her exhibit at the General Mansfield House on Main Street. (Photo by Olivia Drake MALS ’08)

While the rest of her classmates finished exams and headed for Foss Hill, Charlotte Cottier ’12 spent the sunny days of Finals Week inside the General Mansfield Home, getting ready to reveal excerpts from personal letters documenting a husband’s Western frontier travel to his wife at home, a nearly-failed courtship, and a myriad other stories that a nearly 200-year-old house can hold.

Cottier, an American studies and sociology major, is a guest curator for the Middlesex County Historical Society, hanging her exhibit “Within These Walls: One House, One Family, Two Centuries,” which opened May 20.

“The main theme is the social history of the house—showing the changing landscape of people and ideas that have marked a steadfast building so that it really comes alive,” she says.

The exhibit is culmination of a year-and-a-half of work and was sparked by the anthropology course, Middletown Lives, which she took in the spring of her first year. It was in the context of this service-learning course that Associate Professor Gina Ulysse “framed for me the idea of doing a public service by documenting history that hadn’t been recorded.”

Cottier began a project for this class at the Historical Society, cataloguing the contents of dozens of boxes. She found it a treasure hunt. “I’d open the letters and a line would pop out, or there would be a photo that I’d be drawn to,” says Cottier, who continued this work as a volunteer, even after she had met the 15 hours of service requirement for the class.

When the Museum Director Deborah Shapiro offered Cottier a guest-curating opportunity at the Mansfield House, she was thrilled. The work has been a scholarly labor of love; Cottier has pursued the project in her free time beyond academic commitments.

Rather than focusing on the General’s life, however, which ended at the Battle of Antietim, Cottier “wanted to concentrate on other people—his wife, daughter, and son, who lived in the house.”

General JKF Mansfield attended West Point and later married Louisa Mather, whose father, Samuel, owned the house that we now call the “General Mansfield Home,” per the request of his relatives who sold the house to the historic Society in the late 1950s.

“Getting to read the letters between the General and the woman he would marry was amazing,” says Cottier. In the months before the courtship, he was surveying the Western Frontier while Louisa remained in Middletown.

“About six months before they were to marry, she got cold feet,” says Cottier, who included excerpts from the letters on a poster for the exhibit, beginning with one from Louisa, dated December 1937: “Why should I have such misgivings & fears respecting a connexion with one who stands higher in my estimation than any other…I have thought of your happiness as well as my own, and whether I were the person who could most effectively promote it, at any rate, if I marry you, or any other”

“This letter seems to have caught J.K.F. off guard, and in a response dated February 9, 1838 he wrote:

“Louisa you will never be happy with me! Do not think me insane, or think I am disposed to act a dishonorable part by you—it is the reverse—it is my desire to act honourably towards you, and prevent further unhappiness … I now ask you here-after to regard me as a Friend & Brother, for I should never marry as I am now satisfied [I ought] not.

“There is another dimension to this story; it appears that Louisa had been entertaining the ‘frequent’ visits of a man only ever referred to as ‘Dr. U.”, writes Cottier. “Although J.K.F. wrote that he was understanding of Louisa’s fears of marriage, he was furious about her apparent affair of the heart:

“I cannot [reconsider] my ideas of love for a lady to receive the “very frequent” visits of a Gentleman when she is engaged to another: particularly so when she [discovers] she is not indifferent to him.”

“Somehow, most likely after another couple months of letter writing, the two were able to resolve their differences, for they were married on September 25, 1838 in Middletown,” writes Cottier. “The story of their reconciliation is still a mystery (since the Historical Society does not possess most of the letters sent between April and December of 1838), but their marriage would endure five children and 25 years, until J.K.F.’s death in 1862.”

Along with posters highlighting excerpts from the letters and detailing the lives, Cottier’s exhibit includes artifacts in glass cases. She points out two pairs of shoes—one a pair of beaded moccasins that the general said were a gift from some Native Americans. Additionally, a pair of purple silk dancing slippers for the general’s daughter—inside marked “droit” and “gauche”—charm her.

Says Ulysse, reflecting on Cottier’s work stemming from that first course, “When we teach we never really know what will resonate with a student. She is an exemplary student with a most contagious sense of civic engagement that stems from critical awareness of her environment. I truly applaud Charlotte and respect the fact that she had decided very early in her career here that Middletown was going to be more than just the place where she attended university.”

“I want to leave more than just another academic book as the mark that I was here in Middletown,” Cottier explains. “Gina’s course set me on a career path; I’ve had amazing opportunities because of that one course,” she says. This summer, as the recipient of the 2011 Nancy Campbell/National Trust for Historic Preservation Summer Internship, she will be pursuing her curatorial interests in Washington, D.C. 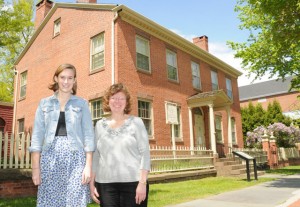