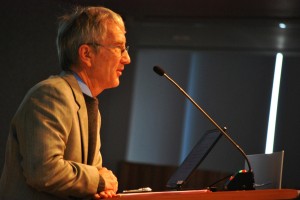 On May 6, the Obama Administration released its most comprehensive analysis to date about the impact of the human activity on the climate in the National Climate Assessment, of which Huffington Professor of Economics and Environmental Studies Gary Yohe is vice chair of the Development and Advisory Committee. The report concludes with more certainty than ever that climate change is affecting the daily lives of Americans right now through increases in extreme weather, sea level rise, heat, heavy downpours, drought and other adverse conditions.

Yohe also spoke to The Associated Press about the assessment, explaining that this final report is a re-written and shortened version of the draft that was released in January 2013, with more scientific references, reviews by experts and the public, and a thorough review by the National Academy of Sciences. There is even stronger evidence now of climate change than there was in 2013, he said.

And Yohe told NBC News that at a personal level, “…everybody can look out their window and see something about their climate that has changed over the last 5, 10 or 15 years.”

In addition, Mother Jones quotes Yohe as saying: “One major take-home message is that just about every place in the country has observed that the climate has changed…It is here and happening, and we are not cherry-picking or fear-mongering.”

Yohe was also interviewed by Voice of Russia UK radio.