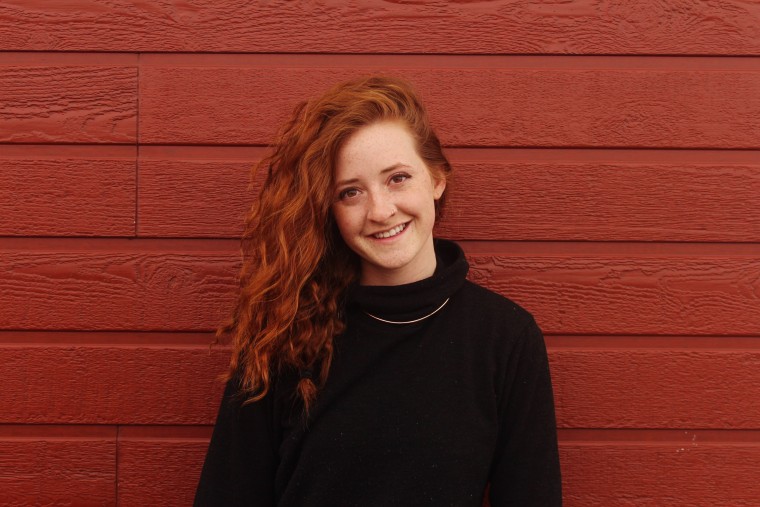 #THISISWHY
In this News @ Wesleyan story, we speak with C. Aletta Brady from the Class of 2015. Brady is a government major with a concentration in international politics. She is a research assistant in the Department of Government, president of the Wesleyan Chapter of Active Minds and co-chair of the Government Majors Committee.

A: Last summer when I was swimming in the Red Sea in Egypt, someone asked me why I was investigating water scarcity and transnational water cooperation. The water was turquoise and completely clear; I could see my toes. I told them that water is vital for life, and that the number of people without access to sufficient and clean freshwater is only growing. They pushed me to go deeper. I looked down at my red toenail polish surrounded by vibrant coral reefs and schools of fish. It hit me in that moment that the root of it all was that I love water. I grew up in water. I’m from Minnesota, where we have more than 10,000 lakes, and I grew up swimming, waterskiing, tubing, canoeing, skinny-dipping, fishing and floating in water. I can’t imagine my life without it. It’s my favorite drink, and it’s where I’m most alive and most at peace. So, while I have an intellectual interest in how to preserve scarce freshwater resources, at the root of it, my interest is personal.

Q: How did you become interested in the patterns of conflict and cooperation in the Nile basin?

A: My interest in the Nile basin stems from a lifelong fascination with puzzles. The Nile River is the river with the steepest uphill battle in obtaining transboundary cooperation. It runs through eleven countries (more than any other river) on its way to the Mediterranean Sea. While long, its volume is relatively small—ninety-two-times smaller than the Amazon River. Thus, the amount of water that the Nile can supply to its numerous countries is scarce. Additionally, as a shared resource, the river is prone to the Tragedy of the Commons, and all of the Nile basin states experience either physical or economic water scarcity. I wanted to understand the factors that aided and detracted from multilateral cooperation in such a religiously, politically, linguistically and ethnically diverse region.

Q: What is the “Tragedy of the Commons”?

A: The Tragedy of the Commons is an economic phenomenon where parties (states, in the case of the Nile) overutilize a shared resource until it is fully exhausted. In the absence of agreements between the states, it is rational for each state to utilize that shared resource before others do—expediting the depletion of the resource. Thus, the ability to manage transnational waters, and avoid a Tragedy of the Commons scenario, is vital to stopping freshwater systems from falling victim to overuse and exploitation. Multilateral negotiation, management and cooperation among states that share a freshwater source, are imperative to sustaining natural freshwater systems.

Q: Why did you choose to focus on the significance of individual state action and the actions of international financial institutions rather than the “usual” focus on structures of power, economic linkages and levels of water stress?

A: Throughout my research process, I examined the impact of a range of variables on transnational cooperation, including domestic policy, financial assistance from International Financial Institutions (IFIs), power relations, economic linkages and water scarcity. Using the empirical method of process tracing—understanding a causal relationship through the examination of smaller causal linkages—my research pointed to the importance of domestic policy and the role of IFIs. This is something that surprised me—because the role of individual state policy to impact the outcome of a multilateral process was largely lacking in the literature on transnational freshwater cooperation—but I ran with it.

Q: Were there times during your research when you gained new insight from a particular interview, or when a finding contradicted or strengthened your beliefs in some way?

A: There was a professor in Ethiopia who scolded me for not understanding the customs of communication. We had arranged to meet at 2 p.m. on a Tuesday, and I had sent him a couple of messages to confirm the meeting beforehand. When I didn’t hear from him, I called him an hour before our scheduled meeting just to make sure that it was still happening. When I showed up at his office, he told me to relax and to trust that plans will happen as they are arranged. He explained that my level of persistence came across as distrustful and disrespectful of the other things going on in his life. When I started to ask my prepared questions, he told me to put them away and to just talk with him. His advice to me was to not forget the colonial legacy in Nile basin countries, and to consider that cooperation means something different to the government than to the people. He told me to avoid trying to do it all, to focus in on a few key things this time around and to not be afraid to leave some of my thoughts out of my research to delve into later. I appreciated his honesty, and I was able to adjust accordingly for other interviews. My conversation with him changed the way that I conducted my research from that moment on: I allowed for more flexibility in my interviews and revisited his wisdom on cooperation many times.

My first “ah-ha” moment occurred at the beginning of my research, when I was escorted out of my first two interviews in Egypt—at the Ministry of Foreign Affairs and at the Ministry of Water Resources. I hadn’t asked any questions; I had only told them that I was an American student doing thesis research on the Nile River. I didn’t even sit down with someone before security asked me to leave and walked me to the entrance of the building. Before that, I hadn’t realized just how deeply water scarcity was felt in Egypt, and just how important the issue of water management was.

Q: How did your research change or broaden your understanding of the challenges faced in the Nile basin?

A: Monumentally. When I began I just had a vague idea what it meant to attempt to allocate or jointly-manage something as vital to life as water.

My project would not have been the same without the ability to conduct firsthand interviews in three Nile basin countries. For example, an interviewee in Egypt mentioned offhand that I should focus on the role of Sudan. As I delved into this, it became clear to me that the role of mid-river states (as opposed to an upriver or downriver state) like Sudan is crucial to understanding challenges in basin cooperation. The role of mid-river states is often overlooked in literature on transboundary relations, and those states are often misclassified as either upriver or downriver states. Mid-river states feel the effects of both upriver and downriver states, and they can serve as mediators in a negotiation setting. Cooperation in the Nile basin cannot be understood without understanding the important role of Uganda and Sudan as mid-river states.

Additionally, seeing the Nile and understanding its different uses in each country was incredibly useful. For example, I didn’t understand exactly what the basin was up against until I drove along the Nile in Egypt and saw the stark line between the lush green Nile-fed land and the desert. Egypt has no stable or dependable source of water other than the Nile.

Q: Why is this research important? What does it teach us?

A: This research is important because freshwater is a finite natural resource that is only becoming scarcer. The reality is that most of the time people with the least resources are those that lose access to clean, safe freshwater first. Freshwater suffers from poor management and overallocation worldwide. Climate change will lead to inconsistent precipitation and rain levels, reduced snowpack and increased extreme weather such as floods and droughts. The combination of these things will result in insufficient quantities of water for human livelihood and development across the globe. That is why this research matters.

Ironically, the vast majority of the earth’s water is not suitable for drinking. Freshwater constitutes less than three percent of the Earth’s total water supply, and the majority of that freshwater is not available for human use. It is estimated that only .007 percent of the planet’s water is available for human usage. Understanding how states can reach cooperation around limited freshwater resources is vital to preserving them, as well as allocating them in an equitable way.

This research teaches us that specific actions taken by individual states and IFIs can impact the outcome of a basin as a whole. It also highlights the important role of mid-river states as mediators and the fact that that states should not be classified solely as upriver or downriver. This research is hopeful in that it suggests that the power structure of a basin does not have to necessarily shift in order for meaningful strides to be made towards equitable utilization of a shared water resource.