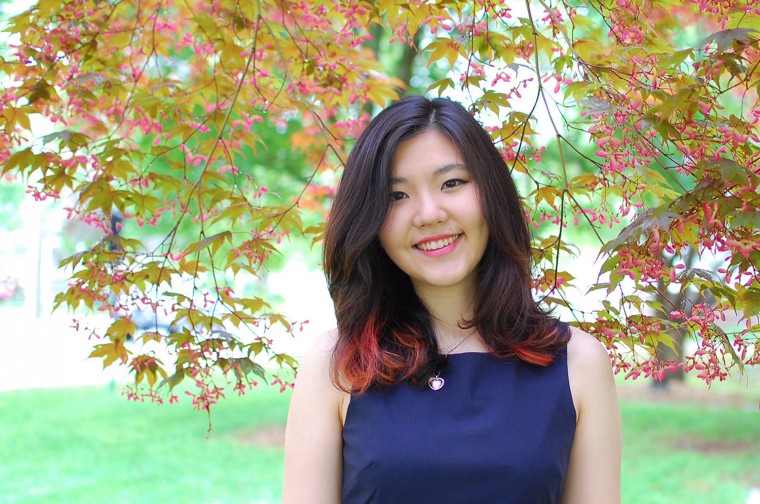 In this News @ Wesleyan story, we speak with Hyo Jeong (Tina) Jung from the Class of 2015. She is a history major with concentrations in social movements and contemporary history, and an East Asian studies minor.

A: As a child, I grew up listening to my grandmother’s childhood stories. Koreans of her generation went through a lot—from the last phase of Japanese colonialism to the Korean War. The Japanese were the villains in her stories about the colonial period, and the general social atmosphere of the current South Korean society towards Japan and the news of the Japanese government’s irresponsible attitude toward its behavior during World War II only confirmed my negative perception of Japan.

Looking back, thinking like this was dangerous, because I generalized and accused the entire Japanese population, not just those who oppressed the Koreans and other East Asian populations during World War II.

In the spring semester of my junior year, Professor Yoshiko Samuel came to my Post-War Japan course and spoke about her childhood experience during World War II. Listening to her stories was an eye-opening experience: She spoke about the wartime governmental censorship, hunger, bombings and the lonely months of evacuation. According to Professor Samuel’s stories, many Japanese civilians were also victims of the war. Hearing her stories helped me to distinguish between the actions of the Japanese military government and the civilians during the war.

After listening to Professor Samuel’s stories, I thought juxtaposing personal narratives of Korean and Japanese experiences during World War II could create a powerful and interesting historical narrative, because of the similarities and differences in those stories. As I began this project, I imagined a conversation between my grandmother and Professor Samuel, talking about their childhoods over a cup of tea. Through the conversation, I wished both participants to discover things they did not know about each other, in order to form some kind of understanding of each other. I hoped this project would help people, especially those with a Korean and/or Japanese background, to view the Korean and Japanese histories more clearly and critically, eventually leading to more amiable diplomatic relationship between South Korea and Japan.

Q: What sparked your interest in oral history?

A: I chose oral history as my main historiographical method in this project because I like listening to stories. I feel like history becomes more personally relatable if you hear from someone who has lived through the period. Oral history became even more interesting as I began to see its historiographical significance throughout the project. The personal narratives I collected for this project revealed certain trends in national historical narratives, as there were some discrepancies between the narratives from the two countries. These discrepancies gave me a chance to further study the close relationship between memory and history, and also allowed me to reevaluate the Korean, Japanese and U.S. national historical narratives on World War II.

Q: How did you choose your interviewees?

A: The method that I used is called “snowball sampling.” In South Korea, I began by interviewing my grandparents, who then introduced me to their friends and other elders in their communities. In Japan, I used my interpreter’s personal connections: I interviewed her grandmother, great-uncle, and her family’s friends and acquaintances. During four weeks last summer, I interviewed a total of 40 elders from South Korea and Japan. The interviews kept me very busy, but interviewing was a fun and valuable experience overall. This project could not have come to fruition without the interviewees’ contributions and support.

Q: Could you share one or two particularly memorable moments from your research?

A: When I was in Japan, I had back-to-back interviews with two male Japanese elders. I interviewed them separately, but I later learned that they were at the same high school when the atomic bomb was dropped on Hiroshima. I was really shocked by this fact, because the way they described their wartime experiences at school was very different. One of the interviewees was very reserved; He didn’t say much, and he barely made any eye contact. The other interviewee was very descriptive and outspoken. He told me about the terrifying scene at the Hiroshima train station right after the atomic bomb was dropped. These interviews demonstrated that memories and personal narratives could be influenced by various personal factors, including a narrator’s personality, hometown and socioeconomic status.

Another memorable moment was when I tried to interview several Korean female elders who were hesitant to tell their stories because they considered their stories to be insignificant. They kept telling me that their stories had nothing to contribute to historical research. It took me a few minutes to convince them that their stories were important both to me and to history. After that, they were open about their stories and were eager to tell me more.

Q: Did you find discrepancies between childhood memories of the Korean and Japanese elders and the official government versions of specific events?

A: As I studied my sources, it was very interesting to find discrepancies between personal narratives (personal memory) and national historical narratives (official memory) on the events during World War II in Korea and Japan. For example, air raids toward the end of the war were extremely devastating to the Japanese economy and society at the time, and many Japanese interviewees shared their painful memories regarding the raids. It seemed like for their generation, the air raids were more of a commonly shared wartime experience than the atomic bombing because of the sheer scale and impact of those raids. However in both Japanese and the U.S. historical narratives, atomic bombings are emphasized more than the air raids. I assume that the emphasis is closely related to how the current American and Japanese governments wish to portray themselves in World War II history. I’m not saying that the atomic bombings should be less emphasized, but I think the air raids that preceded the atomic bombing should be given more attention to create a balanced historical narrative about the end of World War II in Japan.

Another example of the discrepancy between childhood memories and official government versions of events is how the end of World War II is portrayed in Korean national history. There were many Japanese residents in the Korean peninsula by the end of the war. When Japan surrendered, the Japanese residents were chased out of Korea—and many were subject to vengeful violence and material confiscation by the Koreans. Although almost all Korean interviewees mentioned this fact in their stories, the vengeful violence of the Koreans toward the former oppressor is barely mentioned in Korean history. I believe this is because this fact undermines Korea’s position as an innocent victim of colonization. While the few weeks of violence toward the Japanese in Korea at the end of the war certainly doesn’t compare to what the Japanese military did to Koreans during the colonization, the acts of violence by the Koreans toward the Japanese does not fit nicely into the historical framework that the South Korean government and society wish to establish.

Q: Do you attribute these discrepancies to the untrustworthiness of memory or to the official version as truth as shaped by those in charge—or a combination of the two?

Q: What did your research teach you and why is it important?

A: This research is important because of its contribution to oral history and memory in searching for historical truth. Through personal narratives and the memories of the interviewees, I had an opportunity to explore children’s lives in Korea during the last phase of Japan’s colonization and in Japan during World War II. The project’s experimental integration of personal memories and national historical narratives demonstrates how personal memories and official memories challenge each other, and how certain aspects of history are illuminated by the challenges. This process also urges one to reconsider the role of memory in both creating and studying a historical narrative. As a historian I always try to face in the direction of historical truth. Exploring the historical challenges that I faced throughout this thesis project allowed me to step closer toward that historical truth.

The project also contributes to the current international community by suggesting an innovative way to reach a historical rapprochement between South Korea and Japan. The two countries have been engaged in historical disputes for decades, and I believe that an appropriate and critical comparison of the two nations’ histories could lead to a conversation of reconciliation.

Q: How has this experience changed you?

A: All of the interviewees were very supportive of my project, and I truly appreciated their encouragement. They asked me to tell their stories to the world so that there will be no more wars and violence. Some of them even thanked me for doing this project. My shoulders got heavier as I did more interviews, and I honestly do not think I did enough justice to the stories that I have collected, but I really hope that the interviewees know that I respect and appreciate them tremendously for sharing their memories with me.

Writing this thesis has been one of the best academic experiences I’ve had at Wesleyan; I wrote it purely out of my passion for this topic. One night I stayed up until 6:30a.m., still excited about writing my next paragraph. My thesis has been quite a journey, with many hardships and dilemmas along the way, but I grew so much as a person and a scholar through this project. I also received a lot of help from my peers and professors at Wesleyan, and I cannot thank them enough for that. I am extremely excited to take this project to the next level as I deepen my knowledge and thoughts at graduate school.