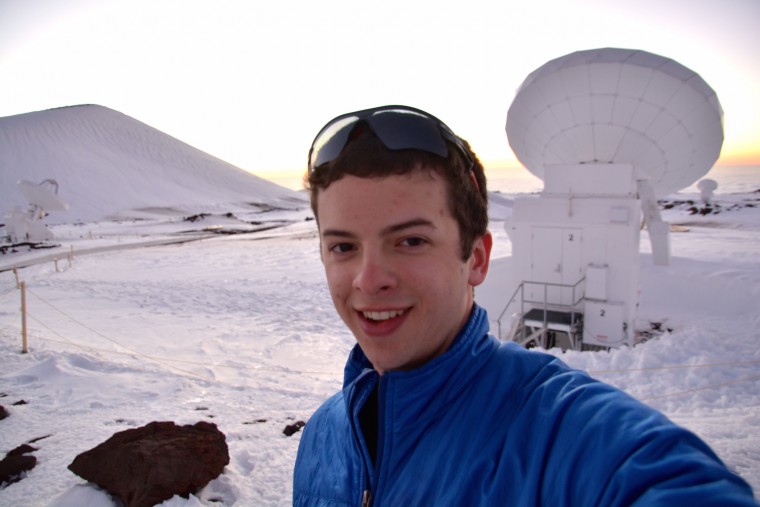 #THISISWHY
In this News @ Wesleyan story, we speak with Sam Factor ’14, a graduate student in astronomy.

Q: Sam, congratulations on completing your master’s thesis in astronomy! We understand you took your first astronomy class in the fall of your senior year at Wesleyan. What was your undergraduate major and how did your late-developing interest in astronomy come about?

A: Thank you very much! As an undergrad, I majored in physics and computer science. During the fall of my senior year I took Introductory Astronomy (ASTR 155). I signed up for the course mainly because I wanted an interesting and relatively easy course to fill out my schedule. I had been interested in astronomy since I was very young, but had never taken a formal class. I absolutely loved the class and decided to apply to the BA/MA program.

Q: How and when did you decide to stay on at Wesleyan to pursue a master’s degree in astronomy?

A: I actually decided to apply to the BA/MA program only a few weeks before the application was due! After taking the intro astronomy course, I knew that I was interested in going on to graduate school in physics or astronomy. I took the opportunity to stay at Wes another year both to gain experience in astronomy and to cement my interest in the subject before I committed around 6 years of my life to it in a PhD program.

Q: How long was the master’s program, and how did the experience differ from your undergraduate studies at Wes?

A: The master’s program is a one-year program but you are expected to be taking classes which will count toward the master’s degree during your senior year. Research is also a large part of the master’s degree as a thesis is required. I started my astronomy research in the spring of 2014. While this is relatively late for a BA/MA, with my physics and computer science background, I was able to hit the ground running.

Q: What is the topic of your master’s thesis? How did your interest in this specific area develop?

A: The title of my thesis is “ALMA Observations of Molecular Gas Emission from a Protoplanetary Disk in the Orion Nebula Cluster.” There is a lot in that title, but essentially I am studying the initial conditions of planet formation around a young star. One thing that drew me to this subject is its tangibility. While larger questions about the nature of the universe are also really exciting, studying planet formation is a little closer to home. By studying how planets form, and what kinds of planets form in different environments, we are working to answer a big question in the field of astronomy right now: How common are planetary systems like our own? This line of research could eventually allow us to determine how common habitable planets are in the galaxy and eventually if extraterrestrial life exists.

Q: Did you work with any particular faculty members on this?

A: Yes, my research adviser is [Assistant Professor of Astronomy] Meredith Hughes. It was actually her intro astronomy course that turned me onto astronomy.

Q: What was the nature of your research for your thesis?

A: As I mentioned earlier, I am studying the early stages of planet formation by observing protoplanetary disks. When stars form, the excess material collapses down into a disk due to conservation of angular momentum. These disks of gas and dust are the birthplaces of planetary systems. This is why all the planets in our solar system orbit in the same plane. Specifically, I am looking at the gas in a single disk located in the Orion Nebula, a region similar to where our Sun formed. I am characterizing the temperature and density structure of this disk using observations from the Atacama Large Millimeter Array (ALMA), a radio telescope in Chile.

Q: How did your work advance the field of planet formation research?

Q: How did your studies in physics and computer science inform your astronomy research?

A: Physics and astronomy are extremely similar subjects (departments at some schools are even called astrophysics) so switching over wasn’t too difficult. When people think of astronomy research they tend to think of someone staying up all night, looking through a telescope. While observing runs may be like this, they actually make up a small fraction of the time spent on research. Some times the astronomer may not even travel to the telescope, as is the case with space telescopes, as it is impossible, or with other large telescopes such as ALMA. With ALMA, the scientist writes a proposal and, if it is accepted, the telescope operators take the data and send it off to the scientist without him or her ever leaving the office. As such, most of the work an astronomer does is actually reducing the data (calibrating it to make it science ready) and then analyzing it. This is where my computer science background really comes in handy as this is all done by writing programs.

Q: What do you plan to do after graduation?

A: I’ll be at Wesleyan for a few weeks finishing things up and preparing my research for publication. Next fall I will be starting my PhD in astronomy at the University of Texas at Austin.

Q: Do you have plans to continue work on this topic going forward?

A: We will see. Right now I would definitely like to continue along the lines of my current research but I am still open to other fields within astronomy. ALMA is a very exciting new instrument and I would love to be able to continue working with it.

Q: How can the public learn more about Wesleyan’s Astronomy Department?

A: If you’re interested in learning more about astronomy, the Astronomy Department hosts public nights every Wednesday during the semester at 8 p.m. There is normally a short talk by an astronomy student or professor aimed at a public audience and if it is clear we open up the telescopes after the talk.