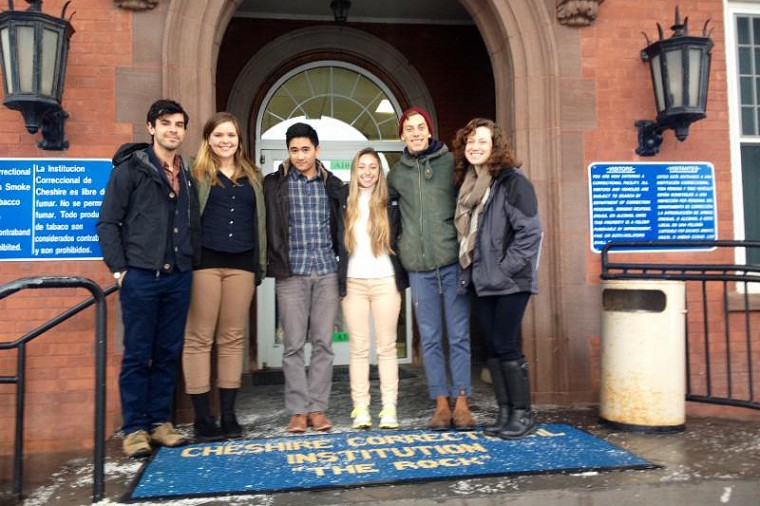 More than 20 Wesleyan students volunteer to be teaching assistants and writing tutors at Wesleyan’s Center for Prison Education (CPE). The program offers Wesleyan classes and credits to inmates.

In a study hall of more than two dozen inmates, Liza Bayless ‘16 approached a cluster of men boisterously chatting in the corner. She listened in to see where the conversation had digressed, prepared to shift it back towards the homework. To her surprise, the debate was centered around the book they were reading for class, Kate Chopin’s The Awakening, and the confines in society that by one reading may have led the protagonist, Edna, to commit suicide.

“The Awakening is known for being this stiff novel with a mainly white, upper-class cast, and I was hearing these men talk about how badly they felt for Edna,” Bayless said. “It’s amazing how much empathy they bring to their readings.”

It isn’t every day that Wesleyan students observe prisoners debating the intricacies of feminist theory, or most topics for that matter. In Bayless’s case, however, it’s twice a week. For two hour-and-a-half study halls, she makes the drive to Cheshire Correctional Institution, a maximum security prison in Connecticut, where she serves as a teaching assistant for visiting faculty Sarah Mahurin’s Imagining the American South.

Bayless is one of about 20 TAs and writing tutors that volunteer for Wesleyan’s Center for Prison Education (CPE). The program offers Wesleyan classes and credits to inmates.

“It’s the brainchild of students, that’s the best thing,” said Richard Adelstein, the Woodhouse/Sysco Professor of Economics, who teaches Order and Planning in Economic Thought at Cheshire. “It shows what students can do.”

The Center was founded by Lexi Sturdy ‘10 and Russell Perkins ‘09 back in 2009, and it enrolled its inaugural cohort of 18 men at Cheshire Correctional Institution that fall. Now, CPE has expanded to York C.I., the only women’s prison in Connecticut, and has a total of 53 participants taking classes. It currently offers five classes at Cheshire and two classes at York.

The program is highly selective, with nearly 300 male and 90 female applicants over the past six years. CPE is the only college-in-prison program in Connecticut and is part of The Consortium for the Liberal Arts in Prison, based at Bard College.

“Being treated as a student, receiving a liberal arts education, it can be a powerful counter to a dehumanizing environment,” said Dara Young, CPE’s program manager. “Being part of a liberal arts program does the same thing for our incarcerated students as it does for any other student – it encourages critical thinking, it allows you to situate yourself in the world around you.”

And CPE is not alone in its mission. For many inmates nationwide, prison education programs promote rehabilitation through education, as well as a channel for intellectual thought to pass the time. Prisoners involved in education programs while incarcerated have a 43 percent lower odds of recidivating than those who did not, according to a recent RAND Corporation study.

The United States is home to two million prisoners, most of whom are people of color who haven’t finished school, according to the Bureau of Justice Statistics. Cheshire and York are no exception. While only 55 percent of inmates at York are white, an astounding 73 percent of the inmates at Cheshire are men of color, according to Connecticut Department of Correction.

“For the students, [CPE] puts faces to this cause,” Young said.

At Wesleyan, event coordinator interns organize benefit concerts and documentary screenings to raise money as well as awareness. A bi-annual book drive seeks support from members of the community to provide free class books to the inmates.

Traveling between campuses, the volunteers do not take their trips to the prisons lightly. A metal detector, multiple locked gates, and barbed wire are all visual reminders of Cheshire’s maximum security status. Just processing in and out of the facility takes more than 15 minutes.

“The hardest part for me was the walk from the waiting room to the classroom,” noted Hannah Sokoloff Rubin ‘16, who worked as a writing tutor last year. “Walking through the halls, I was incredibly conspicuous as a female college student in outdoor clothes.”

The classroom itself, however, felt like a remarkably safe, open space, Sokoloff Rubin remembered. Eager, respectful men — ranging from their mid-20s to 60 years old—greeted her in a room she describes as feeling “familiar in a great way.”

The high-quality educational product is truly a team effort between the professors, TAs and writing tutors, and the research interns, who make sure all necessary supplementary reading materials get printed out and brought to the inmates. A placard for WESU, Wesleyan’s radio station, as well as a promotional poster of College Row hang from the bulletin board—a modest but important indication of the room’s link to Wesleyan.

Professor Adelstein, who is teaching his second semester of economics at Cheshire, noted how pleased all the men look to be there—the only thing keeping them out of the classroom is the occasional prison lockdown.

“It’s hard for people who meet the men not to get caught up in their enthusiasm,” said Adelstein.

They’re so enthusiastic, in fact, that even once out of prison, they seek out more opportunities to learn. Currently, a participant in CPE’s program who was recently released on parole, is auditing Adelstein’s class titled Economic Analysis and the Law on campus. In an upcoming lecture, Adelstein plans to talk about what potential offenders think about before they commit crimes, for the first time, in front of somebody who knows the answer.

“I’m a little nervous about it, but I’m delighted,” Adelstein said. “I’m just thrilled to have him there.”

To get involved, visit CPE’s website or email Dara Young.

nextPlous and the Science of Compassion Featured on NPR