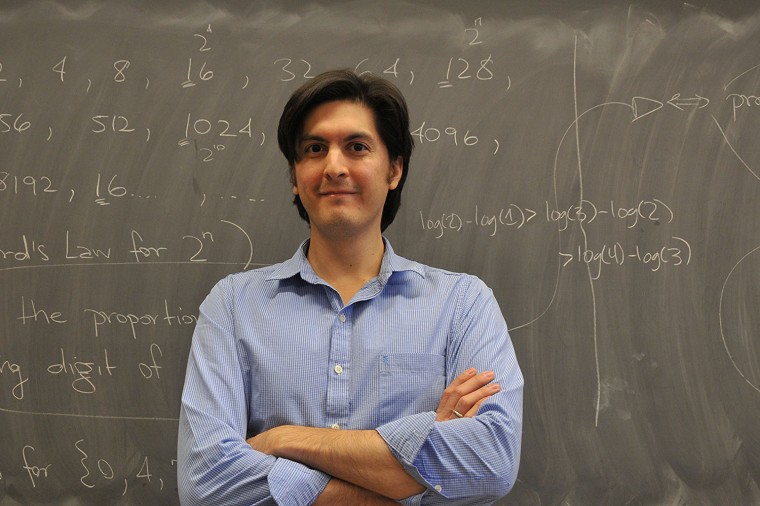 In this issue of News@Wesleyan, we speak with Assistant Professor of Mathematics Felipe Ramírez, who joined the Wesleyan faculty this fall.

Q: Welcome, Professor Ramírez! Please tell us about your life up to now.

Q: How and when did you become passionate about mathematics?

A: I have always loved puzzles and riddles. I didn’t realize until high school that this is the same as loving mathematics. And even then, it dawned on me slowly. In college, I changed majors twice—from electrical engineering to physics to mathematics. And each change was on the grounds that I didn’t care that much about the experiments. I just wanted to understand the theory. I liked the satisfaction of solving problems simply by thinking about them.

Q: What is your area of specialization?

A: My research is in ergodic theory and dynamical systems, and recently in its connections to number theory. Ergodic theory and dynamical systems is about spaces that evolve in time. Mainly, we study the long-term behavior of chaotic systems, where there’s no hope for short-term predictions. This field was born from problems in statistical mechanics, but now it’s an independent branch of pure mathematics, with many connections to other parts of pure mathematics. For example, over the past few decades mathematicians have been developing a beautiful interplay between ergodic theory and number theory. Most of my recent work has been in this area of interaction.

Q: What classes are you teaching this year? Are there any you’d like to teach in the future?

A: Right now I’m teaching “An Introduction to Probability Theory,” which is a course for math majors. I really love probability theory. It’s a subject that requires you to understand it from a mathematically rigorous point of view, as well as from a “common sense” point of view. If you have one without the other, you have nothing. This makes the course quite challenging, but also very rewarding (I hope!) because once you master a concept in probability theory, you feel like you’ve understood something about how reality works.

I’m also teaching a graduate topics course in Homogeneous Dynamics and Diophantine Approximation. This is about one of the interactions between dynamics and number theory that I mentioned before. In this case, the branch of number theory is Diophantine approximation. It’s about quantifying how closely one can approximate given real numbers by fractions. It turns out that many extremely difficult questions in this area can be answered by using tools from homogeneous dynamics, which is a branch of dynamics where the systems we study arise from algebraic constructions.

Recently, it was suggested that I teach one of the first-year graduate analysis courses next year—either Real Analysis or Complex Analysis. These are both beautiful subjects, and I’ve never had the opportunity to teach either of them, so I’ve got my fingers crossed!

Q: What has been your impression of your students so far?

A: I’m very impressed with my students. They are talented and curious. One thing that fascinates me about Wesleyan students is their breadth. Most of my students are majoring in mathematics and usually one or two other subjects, often totally disconnected from math (at least superficially). Every chance I get, I ask them about their interests. In my probability class, there are artists, architects, choreographers, film majors, athletes, etc. It’s a true pleasure to teach to such a multi-dimensional crowd.

Q: How would you describe your teaching style? How do you get students excited about the material?

A: It might be a bit old-fashioned, but I just try to prepare clear and organized lectures, with a subject-appropriate balance of theory and examples. I take pride in having good explanations for things. I want my students to follow what I’m saying, and when I find that a student hasn’t followed, I take it as a personal challenge to find a different explanation.

But I also want them to feel challenged, so that they learn something new. Most importantly, I want my students to challenge themselves. Understanding doesn’t come for free. It takes work to assimilate these abstract ideas. That means asking lots of questions and doing lots of examples outside of class, even after you think you’ve understood something perfectly.

Of course, I hope that my students come out of my class eager to face this challenge. So if for some reason (though I can’t conceive of one) they weren’t already excited by the material before enrolling, then I hope that my own excitement for it rubs off on them. But this is like trying to get someone to become interested in jazz. How do you do it? You may play some selected pieces, explain why you love those pieces, point out similarities and differences among different jazz musicians/genres, talk about the history and evolution of jazz, etc. And you hope that your enthusiasm and your reasons for liking what you like will be infectious. But in the end, the music must speak for itself, and the listener must make the effort to hear its beauty.

Q: What appeals to you about teaching math at a small liberal arts college?

A: I like the idea of having small classes full of students who truly want to be there. Teaching is such an important part of my life. It’s something I work hard at, and there’s nothing more rewarding than having students who appreciate my efforts and provide their own. I’ve gotten that at Wesleyan.

I also like the role that teaching has in Wesleyan’s mission. One of the things that most appealed to me when I was seeking this position was that teaching and research were both emphasized equally. That’s very important to me.

Q: What do you like to do for fun?

A: I’ve already mentioned my life-long love of puzzles. I do the New York Times’ crosswords (Thursdays through Saturdays), and the Guardian’s cryptics (at least I did while I was living in England). I also love music; I’ve played guitar since my early teens. Nowadays, I mostly play children’s songs with my wife and 15-month-old daughter.

previousCurran on Making Sense of His Father's Death With Baudelaire