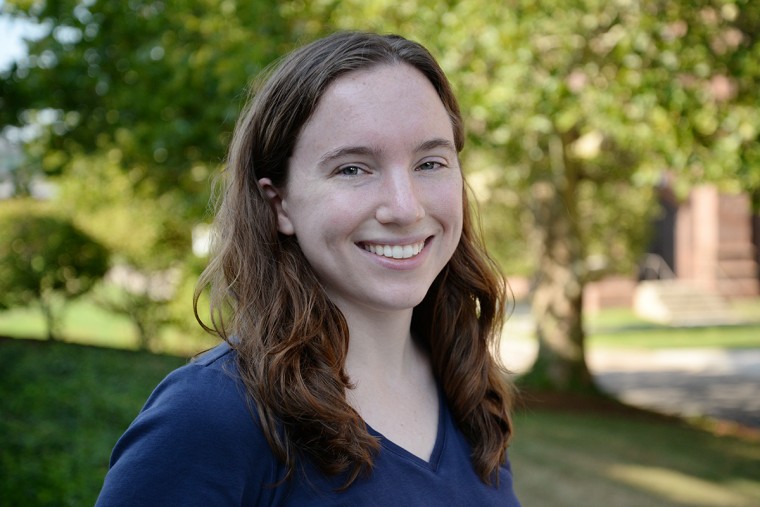 Michelle Personick, assistant professor of chemistry, received the Victor K. LaMer Award from the American Chemical Society Division of Colloid and Surface Chemistry. The honor, which comes with a $3,000 monetary award, was presented at the ACS Colloid and Surface Science Symposium June 5-8 at Harvard University, where she presented a plenary talk.

The Victor K. LaMer Award is presented to the author of an outstanding PhD thesis in colloid or surface chemistry. LaMer was the editor of the Journal of Colloid Science (now the Journal of Colloid and Interface Science) from its founding in 1946 to 1965. In addition to his seminal work on colloids, LaMer’s fundamental contributions to physical chemistry have found their way into every textbook and university course on that subject.

Personick received a bachelor’s degree in chemistry from Middlebury College in 2009 and a PhD in chemistry from Northwestern University in 2013. Her doctoral thesis was titled “Controlling the Shape and Crystallinity of Gold and Silver Nanoparticles.”

A key advance of her dissertation work was the development of a comprehensive set of design guidelines for controlling the shape of gold nanoparticles via reaction kinetics and surface passivation effects. Her graduate research contributed to 15 articles published in the Journal of the American Chemical Society, Nano Letters, Science and others.

From 2013 to 2015, Personick was a postdoctoral researcher at Harvard. As a member of the Integrated Mesoscale Architectures for Sustainable Catalysis (IMASC) Energy Frontier Research Center, she studied selective oxidative transformations of alcohols on nanoporous gold alloy catalysts. In July 2015, she joined the faculty at Wesleyan where her research focuses on the synthesis of noble metal alloy nanoparticles with well-defined shapes and catalytically active high-energy surfaces.

The Division of Colloid and Surface Chemistry is one of the most active Divisions in the ACS with approximately 2,500 members throughout the world.