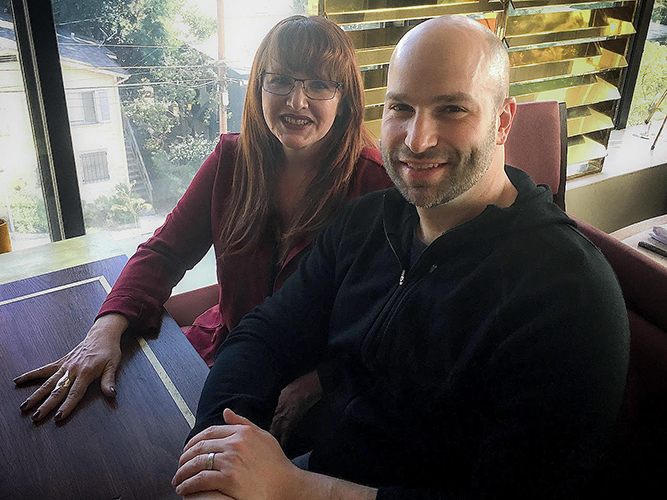 A new CNN original series, Believer with Reza Aslan, premieres Sunday, March 5, at 10 p.m. ET. Billed as a “spiritual adventure series,” in which Aslan, acclaimed author and religious scholar, will “immerse himself in the world’s most fascinating faith-based groups to experience life as a true believer.” The show employs the talents of two alumni who majored in film at Wesleyan: executive producer and show runner Liz Bronstein ’89 and director Ben Selkow ’96. Additionally, Professor of Religion Liza McAlister provided both academic scholarship and on-the-ground connections when the crew traveled to Haiti for the segment on Vodou, which will air as third in the series.

Bronstein joined the project soon after a close friend sold Believer to CNN. “He told me, ‘This is the show you were born to run—and he was right.” Growing up with a “spiritually curious mother” who’d often invite different gurus to their home—and with a sister who’d left to join what the family viewed as a cult—Bronstein welcomed this opportunity “to tell the stories that I’d always wanted to tell.”

She began searching for a nonfiction television director who was also a filmmaker. Selkow fit the bill, and, like Bronstein, came with a unique backstory: he had spent most of his youth living with his mother on a religious commune. Both envisioned the show as an immersive experience. The team formed a tight bond, which became crucial in what Selkow calls “dicey situations.”

In one of these (see the trailer), Aslan is seated on the sand next to a cannibalistic tribe member, whose gestures and mood turn threatening. Aslan calls Selkow over from off-camera for assistance.

“The adage in filmmaking is that when you stop rolling, that’s when the action gets good—so we kept rolling,” Selkow recalls. “And It’s amazing to watch the scene unfold, with Reza slowly realizing that he’s in a perhaps dangerous situation and figuring out how to handle it.”

One of the biggest challenges in filming the show was gaining access to religious communities that were often closed off and wary of outsiders. Bronstein found that working with academic scholars who had done extensive field research often opened a lot of doors in local communities.

For the episode exploring Vodou in Haiti, she researched foremost scholars: “Everybody we talked to said, ‘Liza McAlister is the one.’”

In the episode, McAlister provides Aslan with both the historical and cultural perspective on Vodou. “But more than that, she acted as an incredible ambassador and helped us get access to people we wouldn’t have known,” said Bronstein.

“You could see her years of work in the community,” said Selkow. “She was deeply trusted—and Reza would mine her for as much info as he could off-camera.”

More than gaining access, integrating cultural knowledge, and immersing themselves in the experience, the filmmakers had a further challenge:

“How are we going to tell stories about religion in a way that’s visually and emotionally exciting?” asks Bronstein. “In hour-long episodes, how will Reza participate? Scenes of people praying and mediating don’t make for the best TV. So figuring out what Reza would be doing was paramount.”

The team worked with a thesis statement for each episode, often finding the dramatic structure through a conflict. “Most episodes look at a religion that’s under siege or at least highly misunderstood for a variety of reasons,” Selkow says.

Bronstein gives an example: “For Scientology, we asked, ‘Is this what a religious reformation looks like?’ We focus on people who have left the Church of Scientology but still believe that L. Ron Hubbard is their prophet. We compare it to the Protestant reformation. The true believers featured in the series feel like, ‘The church may be corrupt, but we’re taking back the religion and doing it our way.'”

Despite preparation, the team found surprises: “With our Wesleyan film background, Liz and I know that you go into each documentary super prepared—and the outline goes out the window the first day your feet hit the ground. We’d watch Reza starting every time with ‘All right; this is what I can expect to happen,’ and then there would be a great revelation and we’d watch him go through that—and it was extraordinary.”

While the show was filmed a year ago, the two agree that the series is even more relevant today. “It demonstrates compassion for others, domestically and globally,” says Selkow.

Bronstein concurs. “During the filming of each segment we had different people on the set look at the camera and finish this sentence: ‘I believe…’. I thought it might be a cool way to end each episode. It was just an experiment we thought we’d try and it ended up working pretty well. Now CNN is doing a campaign where users can send in their own ‘I believe’ videos. In these crazy times there’s so much need for tolerance and respect for others who don’t share your beliefs.”

nextStudents Thank a Cardinal For Giving to Wesleyan