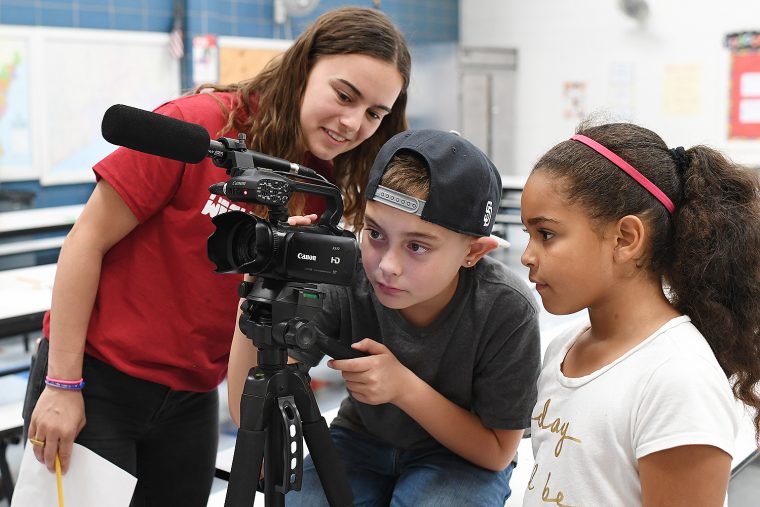 “Press this button and say, ‘Action!'” Sarah Lucente ’21 explains to third-grader Isaiah as he intently peers into a videocamera’s viewfinder. “Think about this scene. Think about doing a closeup.”

Isaiah is one of 10 area youth learning about filmmaking though Wesleyan Film Outreach, a program that provides school-aged children with the skills to write, film, direct and edit themselves.

The class is taught by Wesleyan students as part of the YMCA’s Kids’ Korner, an after-school enrichment program held at MacDonough Elementary School in Middletown.

Collins modeled the class after a pilot he ran in 2016 at MacDonough with his youngest daughter’s fourth grade class.

“Having two kids in the public school system, I see how starved they are for arts education,” Collins says.
“Filmmaking can be an outlet for the spirit, a way to harness all the goofball energy of youth into something productive, rather than just stuffing it down until you get home. It also teaches you to work in groups, to respect each person’s contribution, to plan and organize, practice and rehearse, and to problem solve all the hundreds of things that go wrong when you try to make a movie.”

Luisa Bryan, who identifies as LatinX heritage, enjoys teaching to a diverse group of learners. Witnessing the hegemony in film and media industries from the perspective of an audience member and as a creator has shown Bryan the common nature of this exclusion.

“A way to change this exclusion and counter this hegemony is to distribute resources, knowledge and opportunities. At Wesleyan, we have access to film equipment, professors, transportation, creative drive — everything needed to facilitate the Film Outreach program. Now, instead of feeling frustrated with the film industry’s hegemony, I can help do something about it.”

“What’s most important is that there are resources being extended to a diverse group of today’s youth and this is crucial for the progression of the film and media industries,” she says.

During a class on Oct. 10, the Kids’ Korner children were tasked with writing, acting and directing a film where one student steals a pencil from another student, and then the student who stole the pencil feels guilty for his or her actions.

“I can do that easily,” Isaiah shouts to his peers. “I’m ready.”

Prior to filming, the students broke into groups of three or four and sketched a storyboard, which gives the director a rough idea of what the scene should look like. The Wesleyan Film Outreach volunteers stand by to answer questions and teach, but the young filmmakers do all their own filming, editing and acting. Outside Film Outreach, some students have already filmed and edited short videos with their friends or for school projects.

“This is clearly a class where fun is prioritized, and learning consequentially occurs,” Bryan said. “My favorite part is watching certain students gravitate towards one aspect of filmmaking. Some are drawn to camera operating, some enjoy acting, and some look forward to the editing process. It is also interesting to watch these students collaborate on projects. Creative collaboration is difficult and it’s wonderful that these kids are becoming exposed to it at such a young age — something I wasn’t exposed to until I was a teenager.”

The students currently use outdated equipment borrowed from Wesleyan’s Center for Film Studies. This month, with the support of Academic Affairs, Collins was able to provide better equipment and new editing stations for the students.

Collins, who attended Wesleyan in the mid 1990s, participated in a similar elementary school tutoring program, but found neither he, nor the student he tutored, was interested in the subject material.

“These kind of programs work much better if the teachers are personally passionate about the material,” Collins says. “Our film students have so much energy when they come in here. I thought this would be a great way to channel it in a way that could continue year after year and have a lasting positive effect on Middletown. It’s my hope we can use the class as a model for what the arts can do for the human spirit.”

Any Wesleyan student interested in joining Wesleyan Film Outreach may email Steve Collins, or attend the Underclassmen Film Workshop, a club for non-film majors, held at 4:45 p.m. Monday in Room 124 of the Center for Film Studies.

Additional photos of Wesleyan Film Outreach class are below: (Photos by Olivia Drake)